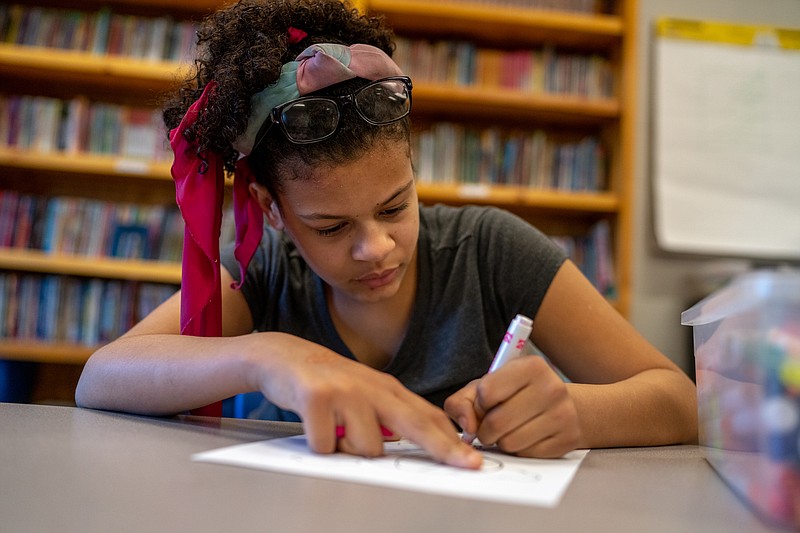 Maycee Oliver, 10, colors a in a picture of a hot air balloon Thursday at the Boys & Girls Club in Jefferson City. Oliver has an autism diagnosis and her family had trouble finding a place where she could fit in and learn. Oliver’s mom, Melissa Oliver, said the Boys & Girls Club has helped her tremendously with reading and her communication skills as well. (Ethan Weston/News Tribune)

Editor’s note: In 2014, the News Tribune began a series called ‘A Christmas Wish.’ The articles, which are published the week leading up to Christmas, share the stories of people whose lives have been impacted by United Way of Central Missouri partner agencies. The series will conclude Christmas Eve.

When you ask Melissa Oliver and her daughter, Maycee, what their Christmas Wish would be, they say they already got it when they found the Boys & Girls Club of Jefferson City.

Maycee, 10, is a fourth-grader at Moreau Heights Elementary School and has attended the Boys & Girls Club for several years. She was diagnosed with autism and a kidney disease.

Before coming to the club, Maycee was in a daycare, but her mother felt she needed more attention and she needed a place that she could stay after school since Melissa works late. Maycee had a friend who went to the summer program at the club, so her mother decided to see if she could get her into the program.

“When she joined the club, she would maybe say two- or three-word sentences, and now she is able to explain to me what she has done throughout her day,” Melissa said. “The social interaction they have here and the inclusion they have for her, in every activity they do, have made such a difference in her development.”

Ask Maycee what she likes to do when she’s at the Boys & Girls Club and you’ll get a list.

“Do you remember we came here and we painted pictures?” Melissa asked Maycee.

“Do you remember what you painted?” Melissa asked.

“Where do we have those paintings now?” Melissa asked.

“In our house,” Maycee said.

Maycee receives tutoring in reading from the Boys & Girls Club, which Melissa said has helped tremendously.

Maycee is already thinking about what she’d like to do when she grows up.

“I want to go to the vet (veterinarian),” Maycee said. “I like animals.”

“Especially dogs,” Melissa said. “She likes to read about dogs.”

“The way Boys & Girls Club has welcomed her with open arms and they do not see her disability makes a parent so happy when you have a child on the spectrum,” Melissa added. “Now when we see other kids at a store or the playground, she goes up to them and starts talking and playing with them. She was never a child to do that before the Boys & Girls Club, but since being there, they have taught her the socialization skills she needs to do that.”

Melissa works full time and goes to school part time at Lincoln University. Her future plans are to graduate with a degree in business administration and find a financially secure job to help raise Maycee. For now, being able to bring Maycee to the Boys & Girls Club has meant a great deal to Melissa.

“I feel safe for her to come here where at her former daycare I worried she’d get pushed to the back and be treated just as a number,” Melissa said. “Here at the club, they treat her as part of their family.”

Maycee would like to start sports, and Melissa said regular sports in school don’t have adaptations she would need. So they will be contacting the Special Olympics to see what kind of options there are for her. For now, the Olivers will continue to enjoy the time they spend at the Boys & Girls Club.

“There are so many great people that work with Maycee every day that I cannot mention every name. But they are all so special to every kid that goes there,” Melissa said.