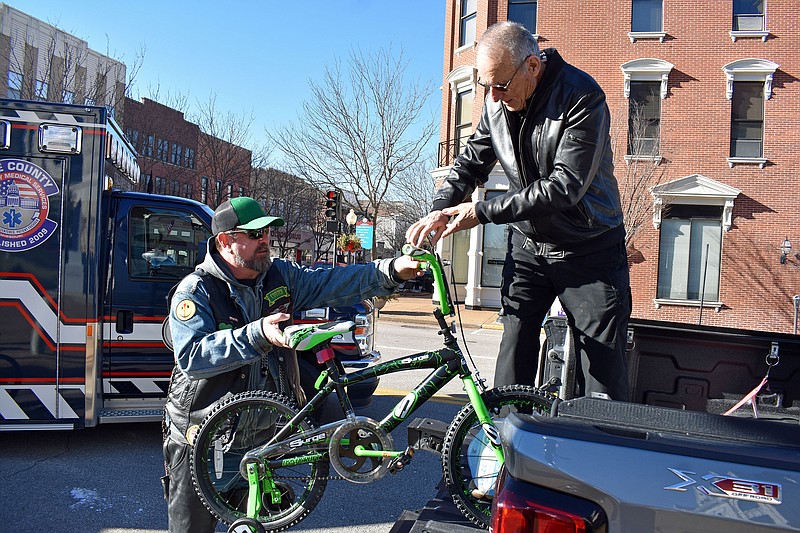 Gerry Tritz/News Tribune Darron &quot;Cooter&quot; Blakemore, left, hands a bike to Frank Livingston, assistant coordinator of the local Toys for Tots campaign. The bike was part one of hundreds of toys donated by county employees. Blakemore is a member of The Hooligans, a motorcycle club that works to help children in need. One of the club members works for Cole County's Public Works Department.

Cole County's public employees donated hundreds of toys that filled two ambulances to the local Toys for Tots program during a Sunday ceremony outside the Cole County Courthouse.

The toys donated included 385 toys from a competition among the shifts of the 70 uniformed personnel at Cole County Emergency Medical Services. A Jefferson City family also donated four shopping carts filled with toys. And The Hooligans, a motorcycle club that includes a Cole County public works employee, again donated $500 worth of children's bikes to the effort.

Cole County Presiding Commissioner Sam Bushman said the county has participated in Toys for Tots for the past six years.

Harold Faughn accepted the toys on behalf of the Marine Corps League, which sponsors the program. Since 1947, the national program has collected and distributed toys to children whose parents cannot afford to buy them Christmas gifts.

Faughn said normally there are 1,200-1,400 children who benefit from the local program. But due to COVID-19, that number has increased to 1,922. But the community, he said, has stepped up to provide more than 2,000 toys this year.

"I'm so happy and appreciative to have these," Faughn said in accepting the county's donation.

He said the program has no budget, but many people contribute, including Capital Mall, which donates the use of space, and the media, who publicizes the program.

Each toy is accounted for and goes to an area child.

"As far as we're concerned, we look at it as if the parents purchased it," he said. "Everyone does something for the needy children; that's what it's all about. These children are real and these toys are going to help them."

Cole County's contribution makes up about 30 percent of the entire program, Faughn said.

Michael Schmid and his sons, Brennan, 10, and Xander, 15, also contributed to the effort. Schmid, a local attorney, said he got involved through his parents when he was a youth. Now, he gets his sons involved.

They shopped for toys at Target, filling four carts. Their toys were among those donated Sunday.

"It's just a Christmas tradition of ours," Schmid said. "When I was a kid, I remember how great my Christmases were ... and I want other kids to have that same joy."

Bryan Boyce, the county's roads superintendent in the Public Works Department, is a member of The Hooligans, a motorcycle group that works to help local youths. Among other things, they've held poker runs to help pay medical bills for sick children.

Several of their 13 members attended Sunday and donated four bikes worth a total of $500.

"It's very heartwarming to see the community pull together" for Toys for Tots, Boyce said. 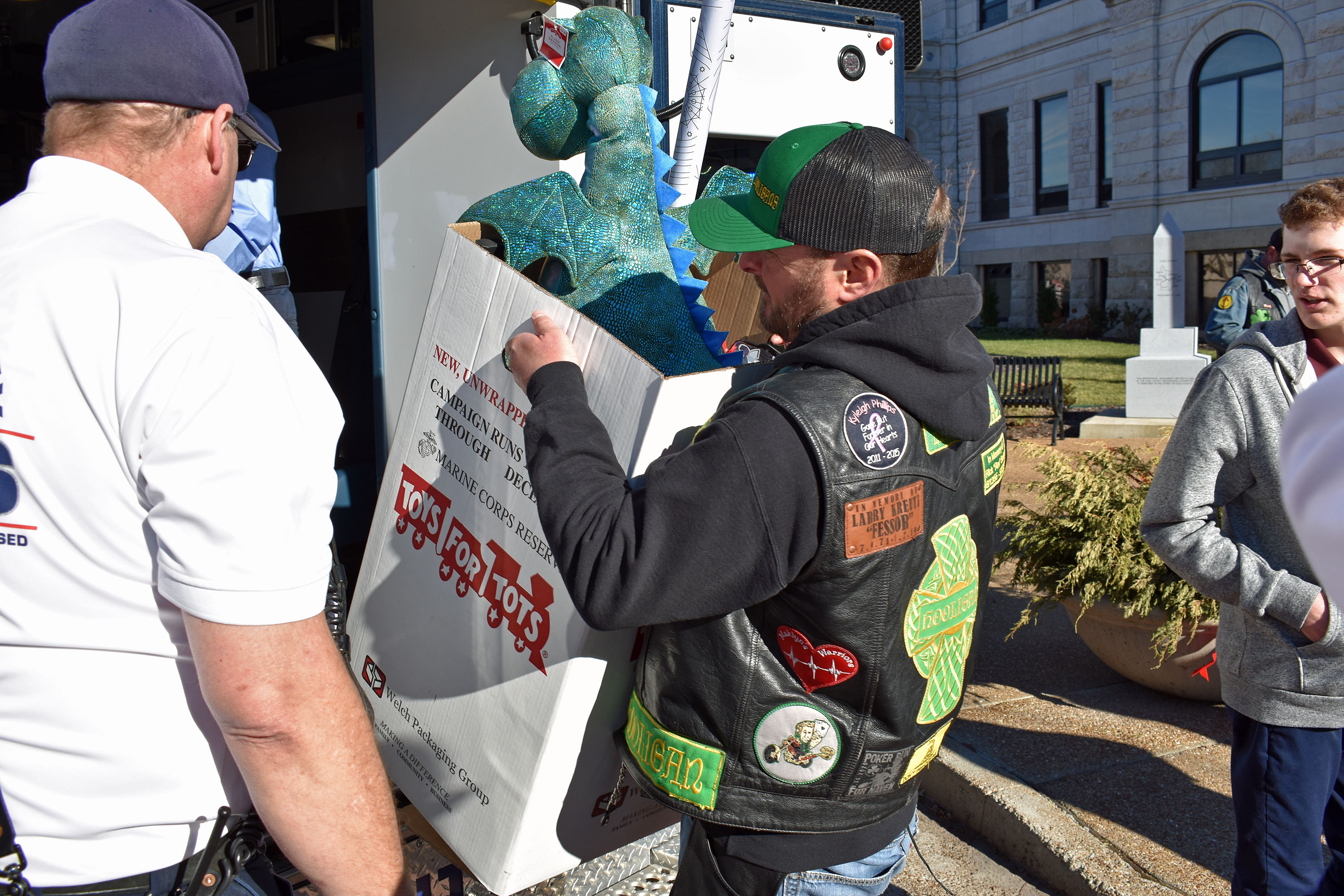 Gerry Tritz/News Tribune At center, Bryan Boyce, roads superintendent for the Cole County Public Works Department, helps to load toys being donated by county employees to the local Toys for Tots program. Boyce is a member of The Hooligans, a motorcycle club that donated four bikes to the effort this year. To the right of Boyce is Xander Schmid, 15. He and his family shopped at Target, filling four carts with toys that they donated to the effort.