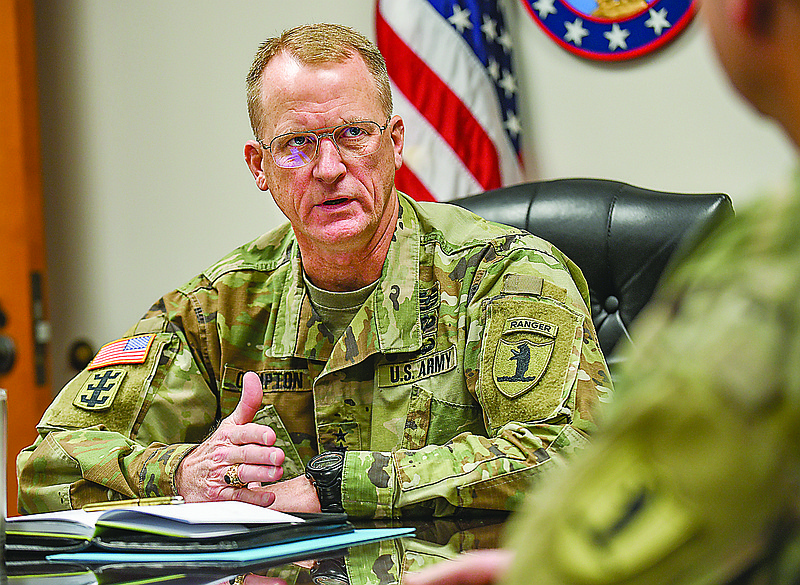 Maj. Gen. Levon Cumpton, Adjutant General of the MIssouri National Guard, is shown at a conference table as he talks to staff about upcoming events and reviewing previous ones. Cumpton has served at AG since August of 2019, being formally pinned from one star to two star in October of 2019.

That's the word the leader of the Missouri National Guard uses to describe the state of the men and women who serve under him.

Maj. Gen. Levon Cumpton came into his position as Adjutant General in 2019 having served nearly 30 years on active duty in the U.S. Army and full-time National Guard service. A Ranger and combat veteran, decorated with the Combat Action Badge, a Purple Heart and the Bronze Star Medal, he is also a veteran of numerous National Guard activations supporting civil authorities in times of emergency and disaster in Missouri.

"I didn't have any surprises after taking this job," Cumpton said. "I think that stems from growing up through the Missouri National Guard. We have kept a strong focus, for a few years now, on how we leader develop. I had the fortune to come up through some great leader development assignments."

Through his service as the CENTCOM operations officer for the National Guard Bureau, Cumpton gained understanding of Washington operations, intelligence and planning.

He had five assignments abroad, spanning more than four years in Germany, Macedonia, Bosnia, Iraq and Kosovo. Within the United States and Missouri, he commanded at every level from company to brigade and served in key staff positions at other times in his career.

"The Guard has a dual mission to take care of the state and federal issues when called upon," Cumpton said. "I have great appreciation and respect for both of those, and that's what I love about the Guard."

Cumpton said the soldiers and airmen in the Guard are committed to "doing good."

"Reflecting on the last two years, back to those dual missions, our soldiers and airmen are focused on bringing goodness to wherever they go," Cumpton said.

"Including our civilian teammates, we have a total compliment of 12,000," Cumpton said.

When Gov. Mike Parson named Cumpton to the position, Parson said Cumpton would work to increase recruitment in the National Guard. In the civilian world, the competition to get people to fill positions in all businesses is intense, and Cumpton said they are somewhat in that same boat, especially when it comes to competing for talented individuals.

"Where we edge our civilian counterparts is the market we have on purpose," Cumpton said. "I think all of us aspire to something greater than we are. When you join the Missouri National Guard, you're joining a team that brings in greatness to all that we do -- whether that be supporting the national and allies in a combat operation or supporting our civilian authorities in fighting against a natural disaster.

"We appeal, unashamedly, to new recruits that when they join this team, we are going to train, fight and win, while taking care of one another," Cumpton added. "I think that appeals to people. We will bring a teammate on and let them know immediately that they are important to us."

Having come into this position as the state dealt with flooding and Central Missouri recovered from a devastating tornado, Cumpton and the Guard were then called to meet a new challenge in the COVID-19 pandemic.

"The soldiers and airmen never failed to impress and respond," Cumpton said. "They did testing, vaccinations, stocked food banks and helped schools provide lunches. These were more examples of viable actions that brings goodness in time of need."

As variants of COVID-19 have continued to be found, Cumpton said the Guard is ready to get back into this mode of response should the need arise.

"We are very thankful that the situation, we believe, is currently well under control, but we constantly monitor it and understand that can change," Cumpton said. "Our state and local authorities are doing a great job managing it and people are being responsible and respectful."

The Guard also had to play a role in providing assistance to some local authorities in the state when it came to civil unrest in 2020, due primarily to the presidential election.

"What people respond to in the Missouri National Guard and understand is, we raised our right hand to support the Constitution of the United States and the Constitution of Missouri," Cumpton said. "One of our great rights as U.S. citizens is the ability to peacefully protest, and soldiers and airmen understand that. When authorities ask us to come in to assist with making sure that can be accomplished, troops are able to understand why that is important. I'm proud of the professionalism they demonstrated along with the local authorities."

At the end of September, the Associated Press reported military suicides were up as much as 15-20 percent since 2019 with the pandemic adding more stress to soldiers' lives. Cumpton said the Missouri National Guard has had efforts to combat suicides in their ranks for several years.

"One of the things we've consistently doubled down is the theme of building resiliency," Cumpton said. "I think resiliency starts knowing that you're on a cohesive team. All the teammates on a cohesive team know their value, respect it and their teammates, which includes their leadership, care for each other. That's a theme we never let off.

"When a recruit first joins, he or she gets a battle buddy or wingman, and they know who their leadership is and training schedule," Cumpton continued. "We get to know their family, and I think that's a critical aspect."

"Our families are our most important teammates," Cumpton said. "The trust and confidence that we build with families helps us recognize if there is a situation that warrants more attention."

Some people might think of soldiers as tough and compartmentalizing their emotions for combat. Cumpton said he doesn't see the way they try to help a soldier in need as a change from what has been done in the past.

"Service members are asked to do a lot, and in our training, we want to equip them to be able to meet those requirements," Cumpton said. "I don't want leaders saying, 'Just suck it up and go.' I want leaders engaging with their team. You need to know your service members."