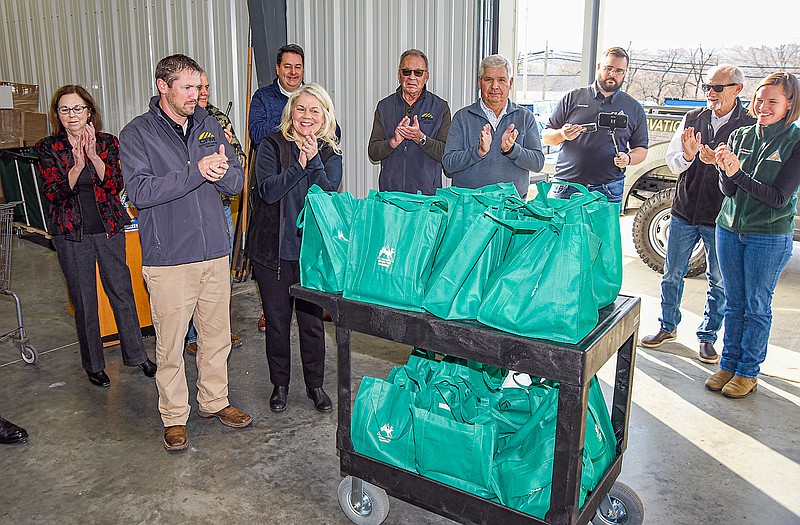 Julie Smith/News Tribune Tyler Schwartze, foreground left, executive director of Conservation Federation of Missouri, and Sara Parker Pauley, director of Missouri Department of Conservation, second from left, joined representatives from Shelter Insurance and Share the Harvest on Thursday at the Samaritan Center where they delivered 300 pounds of venison. The meat, which is ground and in one-pound packages, will be made available to families who receive assistance from the local pantry.

Once again, deer hunters in Missouri are providing food to the needy thanks to a statewide program.

During a ceremony at the Samaritan Center on East McCarty Street, the Missouri Department of Conservation (MDC) thanked the thousands of hunters who donated venison to Share the Harvest, a program providing local hunger- relief agencies across Missouri with naturally lean, healthy venison.

On Thursday, members of the MDC and the Conservation Federation of Missouri (CFM) dropped off 300 pounds of deer meat to the center. The total amount donated by hunters this season won't be known until all the deer seasons conclude after Jan. 15. But last season Missourians donated 231,244 pounds of venison, including 4,470 whole deer.

Participating is easy. Hunters simply take a deer they have killed to one of nearly 130 participating meat processors across the state, including numerous mid-Missouri locations, and let the processor know how much venison they wish to donate. Hunters can donate anything from a few pounds to a whole deer. The processor will then package the ground meat, which they give to local food banks or food pantries.

The program, coordinated by MDC and CFM, has provided more than 4.5 million pounds of venison to help feed hungry Missourians since it started in 1992.

"Recently, I met with the founders of the program and they talked about the red tape they had to go through to get the program going, but they made it work," CFM executive director Tyler Schwartze said. "In the early days, the volunteers actually took the meat to the homes of the needy, and many times the recipients would cry when they got that meat."

Ben Defeo, Samaritan Center operations manager and himself a deer hunter, said there were times in the past it was deer meat or no meat coming through their pantry.

"We appreciate the stewardship this program builds in the community," Defeo said. "Sometimes it's hard to get rid of the deer meat because you get a little too assured of what you're going to do with it. This program still allows hunters to hunt a deer and get something good out of it. You can pass that tradition on to your children or grandchildren. We have a surplus and we can share that surplus with those that don't. That message and the sense of charity the program brings is great."

For more information on Share the Harvest, visit confedmo.org/programs/outreach/share-the-harvest.