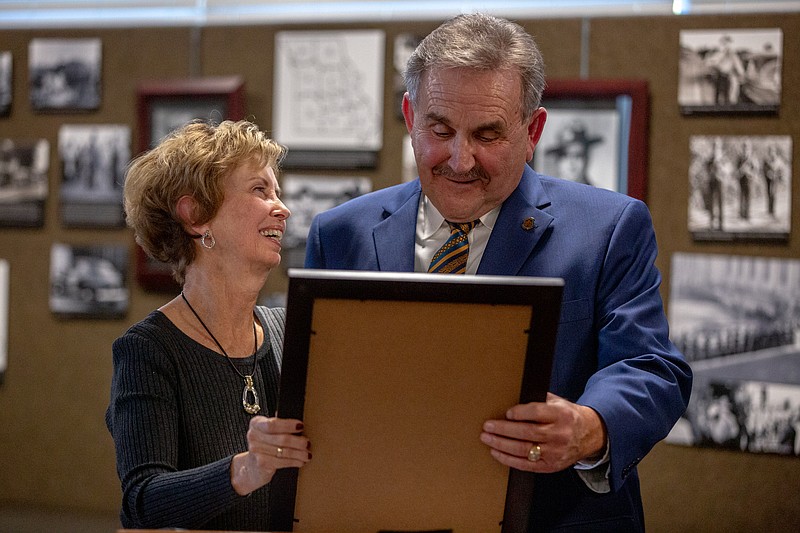 Former Sen. Doug Libla, right, reads a senate proclamation to his wife, Elaine Libla, commending her for her years of service to the Missouri Association of State Troopers Emergency Relief Society on Thursday, Dec. 9, 2021 at the High Way Patrol Headquarters in Jefferson City, Mo. A wall in the headquarters’ museum was dedicated to Libla. (Ethan Weston/News Tribune)

The Missouri Highway Patrol honored the longtime head of an organization that helps families of fallen troopers with a special place in the patrol’s museum.

During a ceremony Thursday afternoon at General Headquarters on East Elm Street, current and former members of the patrol celebrated the unveiling of a plaque honoring Elaine Libla for her contributions to the Missouri Association of State Troopers Emergency Relief Society (MASTERS).

MASTERS is a nonprofit organization that provides financial assistance to the immediate family members of any patrol member killed in the line of duty.

In 1979, a group of businessmen from St. Louis and Jefferson City met with then-Colonel Alvin R. Lubker about their vision of creating a nonprofit organization that would support families of fallen troopers. With then-Gov. Joe Teasdale’s support, MASTERS was  created.

Since the formation of MASTERS in 1979, the patrol has experienced 21 line-of-duty deaths. There have been 31 total patrol members who have died in the line of duty in the 90-year history of the organization.

In 1988, Libla became secretary to MASTERS. Later, this position was reclassified as the executive director. She retired in 2019.

Patrol Superintendent Col. Eric Olson said every December they pay tribute to the fallen troopers and they felt it was the right time to also recognize Libla and MASTERS.

“Their goal, initially, was 600 memberships and today that number is over 1,600,” Olson said. “It’s difficult for me to put in words what MASTERS means to the patrol.”

Olson said the word “modest” best described Libla and offered a personal story of how she worked to help a fallen trooper’s family.

“Elaine called me when she was working with a young man going to college,” Olson said. “He was the son of a fallen trooper, and he was having problems with financial aid at the college. She called me, and we got a trooper in the area the young man was in to come and help him. It struck me that there had been 16 fallen troopers since Elaine began, and I knew that the matters of those troopers were being handled. But to stay in touch and show compassion to those families for 10 to 20 years — that story just stuck with me.”

Gov. Mike Parson was on hand and said he too had worked with Libla through the years and knew of no more humble person than her.

“A plaque on the wall is one thing, but it’s all about the heart that makes the difference in people’s lives,” Parson said. “When I think of a public servant, you can take away sheriff, legislator, you can take away all the titles you want. A public servant is someone who gives for others that they’ll never know, never meet or never see. They just want to make things better for people, and that’s what MASTERS has done and what Elaine set out do when she started.”

Under the plaque honoring Libla is an engraved statement from MASTERS president and retired MSHP Col. Fred Mills.

“Her kindness and efficient guidance shaped the organization for 31 years. During the darkest times, when tragedy struck a member of the Missouri Highway Patrol, Elaine was the heart and soul of how the  MASTERS assisted each of those families. Without question, Elaine left the MASTERS better than when she found it.”

“It was not like a job at all,” Libla said in a thank you statement. “It was my joy and honor to support the patrol.”

Olson closed out the ceremony by telling the gathering he goes by the wall honoring the 31 troopers who have died while on duty before he goes home every night.

“There are four rows and when I close my eyes I can see a row of eight, a second row of eight, a third row of eight and on the fourth row there are seven and there’s blank spot at the end of that row,” Olson said. “It’s the blank spot that makes me reflect on the support that we have in this state and the great work of the MASTERS, knowing that while we hope and pray there remains a blank spot on that row, history indicates that it may not. Having the MASTERS is very reassuring to the patrol.”