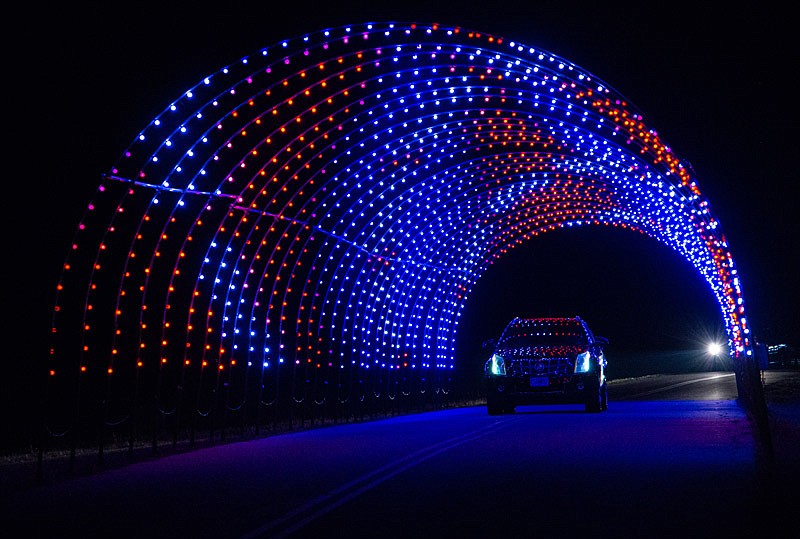 It's beginning to look a lot like Christmas in Jefferson City.

A host of festive activities are scheduled locally this weekend, and holiday light displays are beginning to open across the region.

First up tonight is the Mayor's Christmas Tree Lighting. Join Jefferson City Mayor Carrie Tergin and the city's Parks, Recreation and Forestry Department at 5:30 p.m. for entertainment, refreshments and a visit from Santa Claus at the 16th annual lighting of the mayor's tree in Rotary Centennial Park, 102 Bolivar St.

More holiday cheer is on the docket Friday with the return of the downtown Living Windows event, which was canceled last year due to the pandemic. Storefronts will come to life with music, decorations and dancing from 6-9 p.m.

Also Friday night, enjoy the People's House in full holiday décor. Candlelight Tours of the Missouri Governor's Mansion are from 6-8 p.m. Friday and Monday. Visitors will be greeted by Gov. Mike Parson and first lady Teresa Parson as they tour the mansion by candlelight.

Start your Saturday with a Breakfast with Santa at Capital Mall, 3600 Country Club Drive. Sponsored by JC Parks, Santa and Mrs. Claus will be on hand at 10 a.m. for Christmas carols and book-reading; a light breakfast will be served.

Then, the Jefferson City Jaycees Christmas Parade begins at 4:30 p.m. Saturday. Head to downtown for the 82nd annual parade complete with floats, marching bands and candy. The 2021 parade theme is "Christmas Through the Decades."

Following the Jaycees parade, the Capital City Festival of Lights opens at Binder Park, 5840 Rainbow Drive. The mile-long display features holiday-themed scenes depicting everything from Santa Claus and his elves to choreographed lights synced to music. Vehicles enter South Binder Lake Drive at Rainbow Drive and exit onto Henwick Lane at the end of the drive-thru tour. Hosted as a fundraiser for Homemaker Healthcare Community Outreach, it costs $20 per car. The Festival of Lights runs from 6-9 p.m. through Dec. 31; it is closed Mondays.

Elsewhere in Central Missouri, a variety of other light displays are generating Christmas cheer:

Festival of Lights in Fulton - A free light display is set up at Fulton's Veterans Park on Wood Street; it's open typical park hours, 6 a.m.-midnight, through New Year's Day. In conjunction with the light display, Fulton Parks and Recreation and the Callaway County Salvation Army are again partnering for the Field of Joy, a fundraiser in which 100 or so decorated trees will be displayed on the ball fields at the park.

Unity Circle of Lights - A drive-thru holiday light park is open at Versailles City Park, junction of Missouri 5 and 52 in Versailles. The light park is free and is open each night from dusk until midnight through Jan. 1.

St. Patrick's Festival of Lights - The Shrine of St. Patrick, 724 N. Main St. in Laurie, is bringing back one of the oldest light parks in the area. The park, which began in 1981, is open daily from 6-10 p.m. with a focus on Jesus and His Mother Mary. There is no charge to attend.

Enchanted Village of Lights - One of the largest drive-thru holiday light displays in Mid-Missouri returns to the Laurie Fairgrounds, 269 Fairgrounds Road in Laurie. The display is open at 5:30 p.m. nightly through Jan. 2; it closes at 9 p.m. on weeknights and is open until 10 p.m. on Fridays, Saturdays and holidays. There is no charge to drive through, but donations are appreciated.

Christmas in Proctor Park - Opening at 6 p.m. Saturday, the third annual lighting event returns through New Year's Eve to Proctor Park in California. Sponsored by the city and California Area Chamber of Commerce, numerous businesses and organizations provide light displays through the park. The display is free and open nightly.

Jefferson City Christmas Lights Contest and Tour - Check out the Dec. 7 News Tribune for a map of entrants in the 36th annual contest, sponsored by the News Tribune, JC Parks, and Cottonstone Gallery and Frame Shop. Drive by to view the lights and vote for your favorites in six categories. Final winners will be announced in the Christmas Eve newspaper.