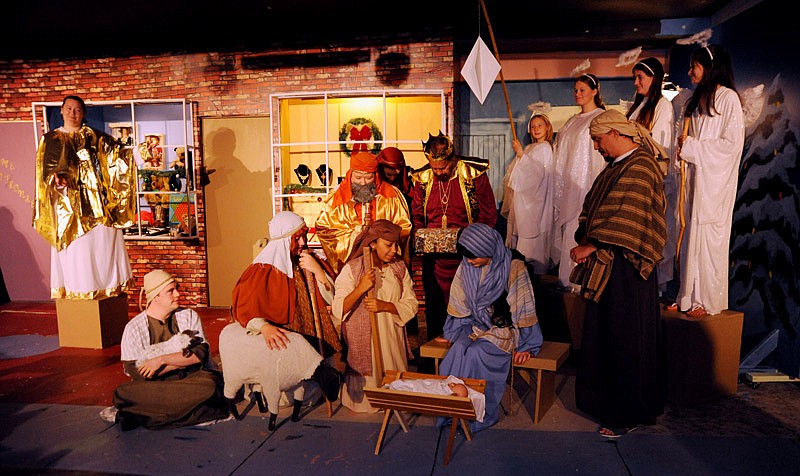 Seen above are cast members of the Stained Glass Theater's production of "The Gift of the Magi." (Shaun Zimmerman/News Tribune photo)

Adapted from the classic holiday short story, Stained Glass Theatre's upcoming production of "The Gift of the Magi" aims to remind audiences of the preciousness of all of life's moments.

Curtis Treat took on the task of turning O. Henry's six-page short story from 1905 into a two-act play.

"It's one of those Christmas classics, and we thought, we do well when we go back to the classics," he said of the Christian community theater group. "The short story is about a moment in the lives of Della and Jim, and I just kind of expanded on that and added a few other moments."

In the story, Jim and Della are a young married couple determined find the perfect Christmas presents for each other even though they have very little money.

Treat said one of the show's main themes is giving: What makes a gift worth giving, and how can you give something to someone special without money?

When working on expanding the short story for the stage, Treat said he spent a lot of time trying to decide what was essential to the story, and in addition to the theme of giving, he said individual moments are what stood out.

"We live life one moment at a time," he said, and thinking about those moments shows how precious time is with those we love.

That emphasis on time with loved ones tends to get a bit more attention during the Christmas season, but Treat said he hopes the production reminds people to value those moments all year round.

With this production, Treat has lots of moments worth cherishing. In addition to playwright, he also serves as co-director and actor, taking to the stage as Magi No. 1 due to a shortage of male actors.

"For me, the hardest job in theater is director because there comes a time where you're done, and you just have to watch. Whereas, an actor always has control in what they're doing, and you see it through to the end," he said. "As a playwright, it's a mixture of both of those because when you do a play, you get the vision of the director and the actors as well because every play is going to be different even though they are the same words."

Wearing many hats has been made a bit easier, he said, thanks to his wife, Candy, who is the show's co-director, and a group of about 25 cast members - some veterans and some who are new to the stage.

"You've got to give actors the freedom to develop those characters because that's what makes live theater so interesting," Treat said, sharing a story from rehearsal about one actress who became emotional while working on a scene about grief, later explaining it reminded her of a personal experience.

"For those of us who have experienced grief, that's just the way it is. You never know when it's going to hit," he said. "It just added something to it: Here's somebody who has experienced grief in a very similar way to what the characters are going through at that point, and it makes it deeper to somebody who's never been through grief."

"The Gift of the Magi" wraps up Stained Glass Theatre's 2021 Season of Healing. Tickets are $10 for all performances except opening night, which will be $7.

The Season of Significance begins Jan. 27 at SGT with a production called "Summer of Hope." For more information, visit the Stained Glass Theatre website.