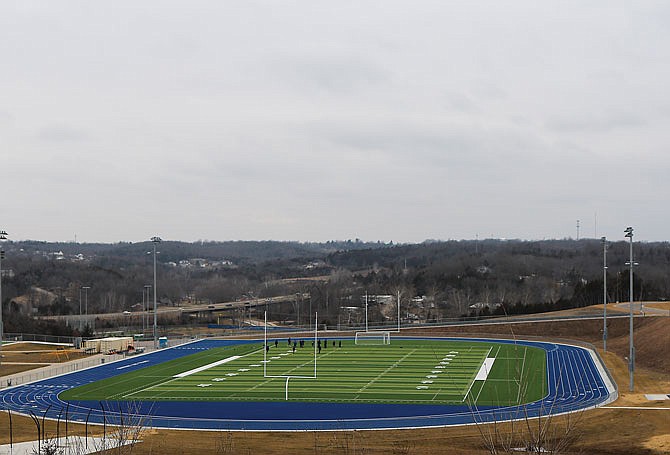 After an intermission due to record-level construction costs, athletic facility construction at Jefferson City High School is expected to begin later this fall.

The Jefferson City School District has been planning the construction of athletic facilities at JCHS and Capital City High School since 2017, but the plan has changed many times since then.

Originally, Adkins Stadium at JCHS was going to be shared between the two high schools' football teams, and CCHS would have just practice fields at first. For other sports, athletes from both schools competed and practiced off campus.

For example, both high schools' softball teams competed at Riverside Park, but JCHS athletes would have to practice at CCHS if CCHS had a game there. However, this plan changed as sharing fields "proved to be very trying," Jason Hoffman, who was the chief financial officer and chief operating officer at the time, said during the December Board of Education meeting.

"That just doesn't work," he said at the meeting. "I think they even had games at Capital City even though they don't have the amenities that are needed. We moved in portable bleachers to have soccer. So sharing the facilities, we learned very quickly, is not working very well."

In 2017, the district saw the first drawing for the CCHS athletic facility, by Schematic Design, which included only one multipurpose practice field. In May 2018, after the district had already sent out bid requests for excavation with just that single practice field, district leaders decided one field wasn't ideal and worked with the construction manager at risk and architects to develop a new design. They then came out with a second excavation bid.

The new design included a soccer field right next to the football field to allow the district to put a shared grandstand between the tennis, soccer and baseball fields. It included only four tennis courts and no viewing tower. At this point, they were bare bones practice fields.

However, as the project went to bid, the district found out it was saving money. The construction manager at risk, Nabholz, put in allowances in certain areas to guarantee a maximum price. Since it didn't use all of those allowances, that money came back to the district, allowing the district to add lights to the baseball and softball fields and four additional tennis courts with lights, a viewing tower and a tennis hitting wall.

It also completed baseball/softball field additions needed to use it as a practice field, such as bull pens, and added turf to Adkins Stadium and the CCHS football, soccer and baseball fields. The district was able to complete just more than $9 million of additions outside of the construction contract, within the guaranteed maximum price of the project.

"We didn't have to increase (the price) as a change order," Hoffman said in December. "We were just able to complete these because of how the process worked."

The district always knew the practice fields at CCHS were intended to eventually be competition ready. During the J+C bond campaign to build CCHS and renovate JCHS, Superintendent Larry Linthacum said in all of his presentations that he wanted to have the same opportunities at both high schools, so the district had to try to find a place where they could put baseball/softball, tennis and soccer fields within the JCHS campus.

In 2018, the district had planned to cut the rock wall between the YMCA and Adkins Stadium to make space for fields on the JCHS campus. There's a creek that runs through that site around the driving range, so the district would've had to remove the driving range. This would've cost approximately $6 million and wouldn't have left room for parking or locker rooms, Hoffman said.

The district purchased and recently finished demolishing about 50 properties in an area bounded by Stadium Boulevard, Jackson Street, Oberman Place and Adams Street, where it now plans to put the fields.

JC Schools now anticipates bringing a bond issue to the board and voters in April 2022. The district can borrow $80 million without raising the tax rate, and it will likely need to borrow that full amount.

The district had planned to borrow $100 million at the same time - $80 million for the school buildings through a general obligation bond and $20 million for the athletic facilities through a lease purchase, or certificate of participation, a type of financing where an investor purchases a share of the lease revenues of a program rather than the bond being secured by those revenues. Certificates of participation are secured by lease revenues and commonly used by public municipalities. The athletic facilities will still be funded through a $20 million COP.

The district will budget $1.5 million a year from the capital projects fund over the next 20 years.

While the district was still not ready to move forward with the K-8 overcrowding bond issue last year, it announced in December that it was ready to move forward with the athletic facilities because it would allow the district to take advantage of historically low interest rates and it would allow the athletic facilities to be completed faster instead of waiting until the other project was done.

In December, the Board of Education approved the district's proposal to move forward with the addition and completion of competition athletic facilities at both high schools with the goal of starting construction in May and having them ready for use in time for the 2021-22 school year.

"That was a very aggressive schedule," Director of Facilities Frank Underwood said in June. "As time wore on, seeing where we were and what it was going to take, it's quite an undertaking. It just ultimately became a reality that that wasn't going to happen."

The district then expected excavation to start at the end of June and for most of the construction to be completed by January - but construction costs have caused setbacks.

The original estimated cost for the projects was $21.4 million. This cost includes the facilities at both schools and the addition of a road behind Thomas Jefferson Middle School, as that project was included in the same contract.

However, the cost has become higher than expected.

"It has become clear in recent months that construction and material costs are at an all-time high, which is something being seen across the country," Interim Chief Operating Officer Dawn Berhorst said earlier this month. "This has required us to look for ways to reduce cost without compromising the quality and functionality of the finished project."

By delaying construction, the district hopes to still stay within the $21.4 million budget.

Jeff Schnieders Construction has installed erosion control, stripped the southwest corner of the site between Case Avenue and Stadium Boulevard, and hauled in more than 100 loads of fill from another site.

The district's grading permit allows it to haul in some additional loads if needed until Sept. 6, but no other work can take place by then until the permit is issued.

The site plan is being finalized, and the district is waiting for the City Council to approve the vacating of right of ways on the streets.

The council is going to request a suspension of the rules in hopes to discuss and approve it in one meeting, he said.

"With that being said, we would hope to have the grading permit ready to be issued by Sept. 8," he said.

The city has approved road closures on Case Avenue, Union Street and Oberman Place between Jackson and Adams streets, and the district has installed temporary barricades in hopes of keeping students from developing traffic patterns down those streets, Underwood said.

JCHS's construction will include: a baseball/ softball field with dugouts, bullpens, batting cages and bleachers; a press box, concessions, restrooms and storage facilities for use between fields; a soccer field with lighting and home and visitor bleachers; a tennis complex with eight tennis courts and a pavilion with restrooms, concessions, storage and a viewing deck; and elevation of visitors bleachers at Adkins Stadium.

Since the groundwork for the Capital City High School athletic facility additions has already been laid, this project will not require as much preparation, such as excavation and demolition. A timeline for the CCHS project likely won't be available until after bids for subcontractors go out this fall, Berhorst said.

CCHS's construction will include a pressbox, home and visiting team bleachers, concessions, restrooms, and locker rooms for use between the football and soccer fields; dugouts, a pressbox, concessions, restrooms and storage areas at the baseball/softball complex; and event parking adjacent to the soccer and football fields and near the tennis courts.