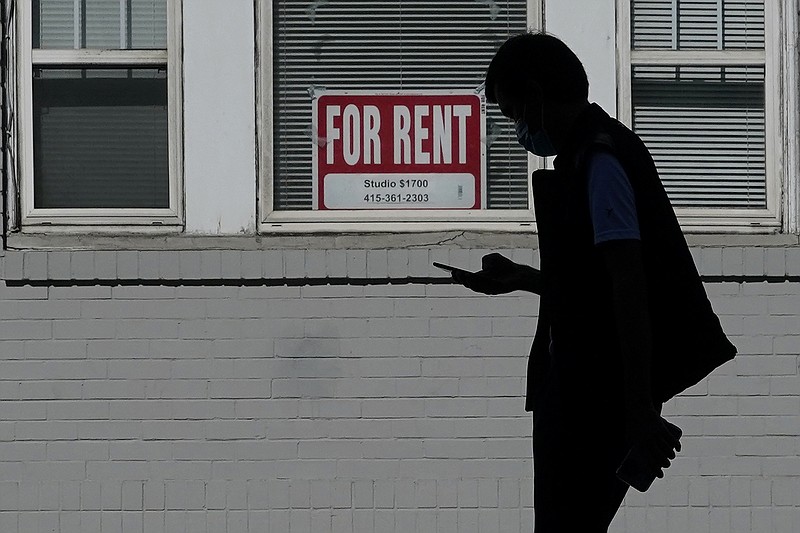 FILE - In this Oct. 20, 2020 file photo, a man walks in front of a For Rent sign in a window of a residential property in San Francisco. The Biden administration on Friday, May 7, 2021, announced the allocation of $21.6 billion to provide emergency rental assistance to help prevent evictions of people who lost jobs during the pandemic. (AP Photo/Jeff Chiu, File)

For many in Missouri, paying the rent during the pandemic has been difficult.

Missouri lawmakers approved use of about $300 million from federal emergency relief funds in rental assistance in January, intended to help them and their landlords.

That money has been slow to reach consumers.

Additionally, a federal moratorium on evictions has prevented a number of people from losing their homes. However, the U.S. Supreme Court struck down that moratorium late Thursday evening.

Regardless, the moratorium didn't apply in Missouri or many other states to landlords who don't receive U.S. Department of Housing and Urban Development (HUD) funds.

Vogeler added he received a request for shelter from a woman who faced eviction Monday in Cole County.

And people - renters and landlords - are confused about where Missouri stands, he said.

Eviction Lab, operated through Princeton University and funded by the Bill and Melinda Gates Foundation, is a team of researchers, students and website architects that maintains a dataset of evictions in the United States, going back to 2000. The site makes the data available so consumers may see how evictions shape their communities. The lab rates Missouri among the lowest of the states for its evictions policies.

"Missouri never implemented a statewide eviction moratorium, though a number of counties did establish protections for renters," according to the Eviction Lab website. "Filings fell early in the pandemic, but increased steadily over the course of 2020."

Missouri is one of six states the lab tracks for weekly eviction filings. The others are New Mexico, Minnesota, Indiana, Delaware and Connecticut.

And although the state had not enacted any protections for renters, some local circuit courts suspended eviction proceedings temporarily in 2020 and again in 2021.

Local suspension are nearly the only protections available for renters.

Central Missouri renters who fell behind on their rent have been anxious, said Julie Rauch, a certified HUD coordinator with Catholic Charities of Central and Northern Missouri (CCCNMO).

Rauch, who is working with about 20 clients (some renters and some homeowners), said the federal government has provided a lot of guidance on what it would like to see happen with renters.

The first thing to do is speak with your landlord.

She points out the Missouri Housing Development Commission, which is responsible for getting the $300 million in federal funds into the hands of renters and landlords has an application process.

Begin by going to the organization's website where you'll find the State Assistance for Housing Relief (SAFHR) program.

CCCNMO serves a large portion of the state, but most of its clients for HUD counseling are in the Columbia/Jefferson City area, she said.

"We don't provide housing for people. We do try to find places for people to get their help," Rauch said. "We walk people through the process and help them with that."

People need to be proactive. Don't wait, she said. Reach out for assistance as soon as possible. If somebody needs help, they should go to HUD.gov.

Although Missouri had few eviction moratoriums, the federal moratorium applied to all housing that was connected to HUD.

Up until Thursday's Supreme Court decision, the authority wasn't allowed to do any evictions, she said. The authority sent out notifications and reminders in July, when the previous moratorium was nearing an end.

Staff hoped to prevent renters from being evicted.

"Our goal is to try to help you get your rent paid," Wessler said. "You send them a reminder letter letting them know they didn't pay their rent. The majority work it out by the next month."

It may be different this year.

Typically, in the properties that serve elderly populations, maybe one renter falls behind during any given month. In family properties, it's one or two renters who fall behind.

The good news is that a number of renters were coming in to make arrangements to get their rent paid.

Staff at the authority are waiting on direction from HUD, Wessler said Friday.

"We'll act on HUD's direction," she said. "HUD originally started the moratorium - they did not want us terminating (people's housing).

It's unclear if HUD will renew its own moratorium, she continued.

"We have several professional organizations who've been saying they'll keep us posted on what's going on," Wessler said. "We figure by Monday they'll have several comments coming on where we go from here. Even if they say it's over, we have to give a 30-day notice."