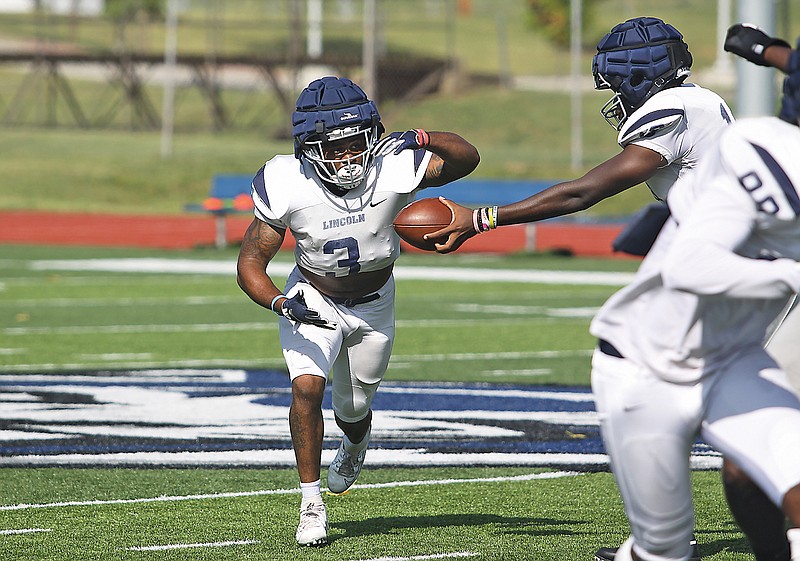 It has been a long offseason for the Lincoln football team.

Sure, the Blue Tigers played a pair of games in the spring, salvaging what they could from a 2020 MIAA season that had been canceled due to COVID-19. But just two games in a 20-month span has several players itching for the opportunity to play a full conference schedule this fall.

"It's different, because we have the mindset that we're getting ready to play a game on Sept. 2," Lincoln coach Malik Hoskins said after Saturday morning's scrimmage at Dwight T. Reed Stadium. "We don't talk about the 'what ifs,' we just talk about going full speed ahead and preparing for Washburn on Sept. 2."

The scrimmage roughly marked the halfway point of fall camp for Lincoln, as the Blue Tigers prepare for their Thursday night home opener against the Ichabods.

Among the key returners for Lincoln is running back Hosea Franklin, who was the 2019 MIAA rushing champion with 1,359 yards. Franklin broke loose for a pair of 20-plus-yard rushes in Saturday's scrimmage, one of which went for a touchdown.

"Hosea has finally got a bounce in his step again," Hoskins said. "He's starting to look like the kid that he was in '19. I've been on him about being in shape and doing the right things, eating right and getting his body to where it should be.

"Today, he made some moves that were pretty impressive."

The Lincoln defense only gave up the one touchdown to Franklin and held the offense to a few field goals in the scrimmage, getting some key red-zone stops.

"We were shaky initially," Hoskins said of the defense. "It's a new scheme that they're still trying to get used to. We're solid on that side of the ball, in my opinion. We're going to win or lose football games with our defense."

Lincoln played spring games against Nicholls State and Texas Permian Basin, but their third game against East Central was canceled due to low roster numbers. The Blue Tigers had around 55 players dressed for Saturday's scrimmage.

"Our numbers aren't where we want them to be," Hoskins said, "but the kids that we have, they're working really hard."

Since the East Central game was canceled in April, Hoskins and his staff have been working to shore up the roster numbers. COVID-19 restrictions limited much of the recruiting activity for NCAA programs.

"It's been a grind," Hoskins said. "There has been no time off. And there were only three of us coaches at one point recruiting throughout the summer, but now we're fully staffed."

On Thursday, the MIAA announced its COVID-19 protocols for the fall semester, which will be less stringent than last fall.

With the recent spike in positive COVID-19 tests from the delta variant, Hoskins says nothing is guaranteed.

"Right now, we're preaching 'vaccination,'" Hoskins said. "We're trying to educate players on getting vaccinated, and not just getting it, but why they're getting it. We're asking them to do their own research. We're going to bring in someone from the health care profession to talk to them and give them the pros and cons of being vaccinated.

"We're not out of the woods yet, it's still a day-to-day thing."

Nothing is guaranteed, but the season opener is less than two weeks away, followed by 10 more games.