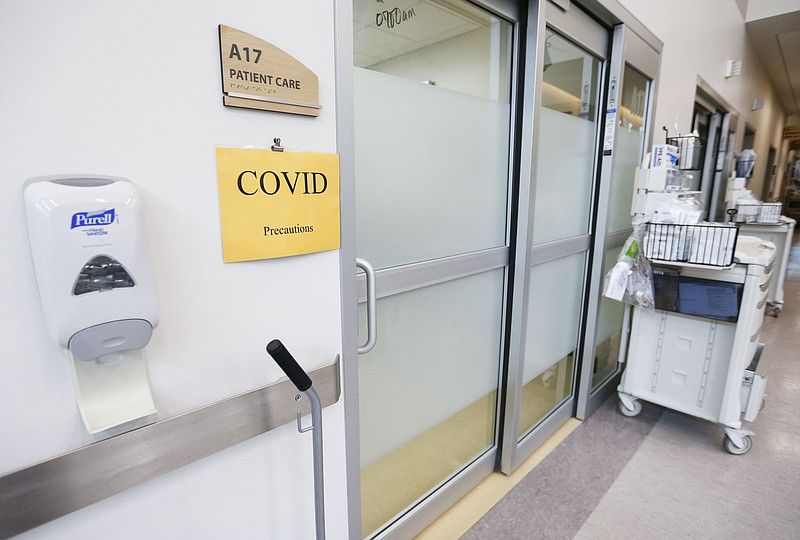 A patient room is marked with a sign noting the patient is COVID-19 positive in the CoxHealth Emergency Department, Friday, July 16, 2021, in Springfield, Mo. (Nathan Papes/The Springfield News-Leader via AP)

Heck, if they've only been in an emergency room or intensive care unit over the past 18 months, they've seen more than most.

Sure, hospitals had anticipated surges.

"This newest wave kind of caught us all off guard when it started in early June," Ungs said. "By mid-June, we were in the thick of it. By July, we started seeing more and more admissions.

"This is the worst that Mid-Missouri has seen."

There had been little discussion publicly about what was going on in our local hospitals.

Then, early this week, Shannon Hoffmeyer, a nurse in the Intensive Care Unit at Capital Region Medical Center, posted on Facebook her thoughts about the toll the pandemic is taking on her hospital, its staff and the patients who seek help there.

She discussed working in a small, 115-bed hospital (which has 12 ICU beds) in the Capital City. Administrators keep 14-16 ventilators on hand.

"I have been on the front lines for the whole pandemic," she wrote. "The first wave was bad. The second was bad. This wave is horrific."

During the first 24 hours of last weekend, seven people died in the ICU. Six had been COVID-19 patients.

One COVID-19 patient had a heart attack and died in the parking lot, before he reached the front door.

At one point during the weekend, all the "crash carts" - a self-contained mobile unit that contains virtually all the materials, drugs and devices necessary to save someone whose heart stops - in the emergency room were tied up and Hoffmeyer had to bring in another from the ICU.

Two patients crashed at the same time, both because of complications from COVID-19. Both died.

"I wrote that (Facebook post), then went out for a day to decompress," Hoffmeyer said Wednesday. "I left to organize my thoughts - then I thought, 'Oh my God, what have you done?'"

The intention, she said, was to get information out to the public. To let her acquaintances know that despite the hospital doing everything right, people are suffering and dying here in Jefferson City.

Media have been covering the stress on hospitals in Florida, Louisiana, Arkansas and Texas, but those states aren't alone, she said. It's happening here, too.

Patients lay in the parking lot, waiting for rooms to come open in the hospital. And ambulances pull up - one after another - Hoffmeyer wrote.

Staff wring their hands, worried they'll have to move patients out of ICU - into units that aren't equipped, or staffed, to handle them - to make room for sicker patients.

Nurses had all gone through emotional breakdowns. Many are in counseling.

On Thursday, during the Cole County COVID-19 update, CRMC Chief Clinical Officer Michelle Barg said the hospital deployed clinic mental health resources to the floors where they can immediately assist staff through difficulties.

"Our long-desire as we all are dealing with staffing shortages is to give them some reprieve from the schedules they're having to endure at this point," Barg said.

"Even I struggle with a lot of anger - sadness," she said. "With this wave, so many people have come in and said they just thought they were healthy. They'll ask for things like high-dose vitamin C infusions. It breaks my heart, because if that stuff would have worked I cannot imagine that if there was a treatment that they thought would work, would help, that (doctors) wouldn't give that."

Hoffmeyer said she doesn't know how many physicians she's bumped into, crying in the hallways.

There is so much wrong about what is happening across the nation now, that doesn't have to happen, she said.

The hospital is full all the time, she said. Typically, the summer is considered the slow time.

During summers, people aren't having major elective surgeries. There are no widespread respiratory illnesses - the flu season is over.

There are fewer emergencies.

The ICU may have seven or eight patients. Out of those patients, three or four are being retained in the hospital for 24-48 hours of observation, so their doctors can keep an eye on them.

There may be four to five on the ventilators.

"It's getting worse, and patients are younger," Hoffmeyer said. "(They're) worse and younger - a lot younger. The first and second wave - around November and Christmas - those weren't people I was overly shocked by. They were people with co-morbidities."

Co-morbidities describe the presence of two or more underlying health conditions or diseases in a single patient.

During a typical weekend, there might be one or two patients in the ICU who die.

However, they are people who one might expect to die - in their 70s or 80s, and having suffered a major heart attack or very septic ruptured bowel.

"This weekend, I think our youngest patient was 45. Our oldest was, I think, in his 60s," Hoffmeyer said. "If you can't oxygenate, your heart will stop. Most 45-year-olds, when they come in in respiratory distress don't die like this. Some of these people - we cannot get their oxygen up even with the highest settings on the vent."

"This is the busiest our hospital has been," he said. "Right now, on a typical busy day, we could easily have a three- to five-hour wait in the waiting room."

That's troubling, he said, because the hospital prides itself in keeping wait times down.

The problem is that there aren't enough beds to admit patients, so they take up space in the emergency room.

Lenora Adams, regional vice president of medical affairs for SSM Health, said during the county health update Thursday that the hospital had its third-highest population of COVID-19 patients admitted since the pandemic began, 37.

"I wouldn't say that it's getting worse, but it's definitely not improving," Ungs said.

Staff at St. Mary's Hospital have reached out to colleagues they know, searching for beds to free up space - even hundreds of miles away.

Ungs said he attended medical school with doctors who work in two big systems as far away as Des Moines, Iowa. Even they don't have available beds in their 500- or 600-bed hospitals.

"So, we hold onto people in the Emergency Department a lot longer than we normally do," he said.

And, the demographics for patients continues to show they are getting younger.

"In my career, I've never seen so many young people get so critically ill - and end up dying," Ungs said. "They are in their late 20s or early 30s."

And, he sees the difference vaccinations make.

"I've taken care of a small subset of patients who have been vaccinated and been diagnosed with COVID-19," he said. "I have not admitted any one of them. I don't think any of our vaccinated patients have been in the ICU. And, no one in our facility has died, who has been vaccinated."

St. Mary's Hospital has plans, he said, to offer vaccinations in the emergency room. If a patient comes in with broken bones or other illnesses, the intent is to offer them COVID-19 vaccinations.

"The biggest thing for the community, after vaccinations, is letting people know to cut us some slack," he said. "We're understaffed and overworked. Wait times are going to be longer. We've seen patients get hostile and upset - yelling and threatening us. That makes the environment more hostile."

It's no wonder some health care workers are walking away.

"Patients, families are so angry," Hoffmeyer wrote in her Facebook post. "They can't grasp there is nothing we can really do once they are this sick."

"One of my team is leaving bedside nursing for right now," she continued. "I love bedside nursing, but it may reach some point that for the benefit of my family, I may have to leave."

Hoffmeyer has a daughter nearing teenage years who tries to tell her about school problems when she comes home from work.

Hoffmeyer would like to tell her that she just can't deal with that right now, because she put 11 people in body bags.

But, that's not her daughter's problem.

"These are the last few years of her life when she thinks her mom is OK," Hoffmeyer said. "I want to be more for her than a crying mom on the couch."