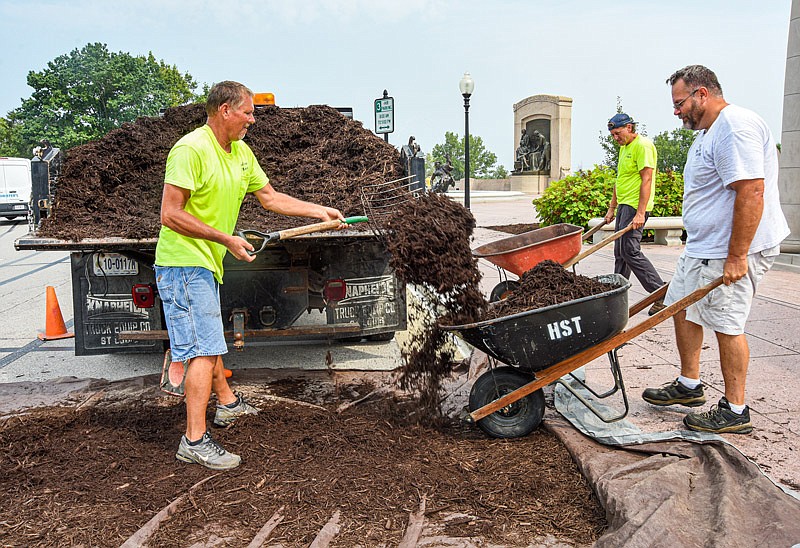 Perry Siebeneck loads mulch into wheelbarrows Friday for co-workers, Derick Coots, right, and Jake Otto to spread around trees and plants on the Missouri Capitol's north side. Facilities Management crews have been busy in recent weeks making sure that the grounds are in top shape going into next week's Missouri Bicentennial celebrations in and around the Capitol.

Missouri's 200th birthday celebrations are bridging the accomplishments of the past with a look to the future.

Contribute to a statewide time capsule, enjoy free ice cream with the governor and tour historic buildings Monday and Tuesday.

Missouri's Bicentennial Commission is upholding its mission in Jefferson City with a series of events and exhibits celebrating Missouri's 200 years of statehood.

The commission, co-chaired by former state Sen. Ronald Richard and Mayor Carrie Tergin, was created in 2018 through an executive order signed by Gov. Mike Parson.

The group is tasked with helping the State Historical Society of Missouri carry out its commemoration of the state milestone and further efforts to "honor the State of Missouri and its rich history and heritage on the occasion of its bicentennial."

Beth Pike, bicentennial strategic communications director, said the planning process began in 2013 when the Missouri General Assembly asked the State Historical Society of Missouri to develop a plan for commemorating the bicentennial.

Pike said the planning process picked up steam about four years ago when organizers began visiting every county in the state to take a grassroots approach to events.

"We were finding out what communities wanted to do for the celebration and commemoration, and as a result we've had over 200 projects statewide," Pike said.

The Capital City will begin celebrating the state's bicentennial at 2 p.m. Monday at the Capitol grounds with a dedication of the Bicentennial Bridge and Chess Board.

The pedestrian and bike bridge will stretch from Jefferson City to Adrian's Island, restoring the city's connection to the Missouri River and creating a path to the life-sized Bicentennial Chess Board.

The chess board was developed in collaboration with the World Chess Hall of Fame.

The Missouri State Museum will showcase the Missouri Bicentennial Timeline, Missouri Trailblazers and Show Me Hooked Rugs exhibits both days.

The Supreme Court of Missouri is offering 30-minute tours of the building's first floor, the Division I or II courtroom, the Old Drum statue and the law library on both days as well.

On Tuesday, a formal ceremony recognizing the state's bicentennial will kick off at 9 a.m. on the front steps of the Capitol.

Following the ceremony, a U.S. naturalization ceremony will take place in the first floor Rotunda of the Capitol.

Face masks are required for the naturalization ceremony, and the State Historical Society will be livestreaming bicentennial events on its website for those unable to attend.

The first 200 people in line will receive a free birthday cake flavored sundae; ice cream cones will be sold for $1 and samples of Prairie Farms' small batch ice cream pints will be offered.

Free exhibits located along the first floor of the Capitol on Tuesday also will be available to keep Missourians immersed in the celebrations.

Bicentennial Coordinator Michael Sweeney said the primary focus has been to engage people across the state to get them involved in celebrating the state's 200-year history.

Bicentennial posters created by Missouri school children, a quilt exhibit, a collection of 200 photos capturing Missouri's distinct qualities and a mural painted by thousands of people across the state will be on display 9 a.m.-4 p.m Tuesday.

He said two artists, Aaron Horrell and Barb Bailey, came up with the idea for a 12-by-30 foot mural showcasing Missouri's state symbols, which people across the state helped paint.

"I love this idea because it's kind of the perfect bicentennial thing: it's lots of people working together and doing something together," Sweeney said.

The mural will be installed in the Truman Building in September.

Pike said commemorating the state's 200-year history also provides an opportunity to chart a course for the future.

"It's kind of a time, a moment, to reflect on our past, but most importantly we can use that time to also think about what's ahead and what do we want ahead for Missouri," Pike said.

The Capitol will have a time capsule for Missourians to contribute notes to future generations on Tuesday.

Notes contributed to the time capsule will be added to an exhibit at the State Historical Society of Missouri in Columbia, which will be opened in 25 years.

Pike said many people and organizations have taken the opportunity to write about future aspirations.

The League of Women Voters of Metro St. Louis, for example, wrote, "We hope that your generation recognizes political, economic and social equality for all Missourians."

The Bicentennial Commission of Maine, which entered the union at the same time as Missouri in the Missouri Compromise, also sent a note for the time capsule.

"It is our sincere hope that you are reading this today as a Missourian and a citizen of the United States of America living in a peaceful, fair and safe society continuing to work toward the full realization of the American dream," the note from Maine states.

The Mid-Missouri Amateur Radio Club, for example, is operating a special event station through Tuesday with the call letters WM.

Missouri State Archives is hosting a bicentennial photograph drive 9 a.m.-4 p.m. Tuesday. Staff will be available at the archives offices on West Main Street to scan up to seven photos, centered around Missouri cultural activities, events, people and places, as a way to grow the state's photographic history.

The State Archives is accepting photos, which can be submitted electronically after Tuesday's event at sos.mo.gov/BicentennialPhotoDrive or in person at the archives offices, through Aug. 22.

Pike said one of the goals of the bicentennial events is for Missourians to get to know each other better.

Whether it's on an individual or county level, Pike said the events encourage people to explore the state and learn about different regions and the people of Missouri.

In the end, Pike said, every county in Missouri has participated in the bicentennial celebration in some fashion.