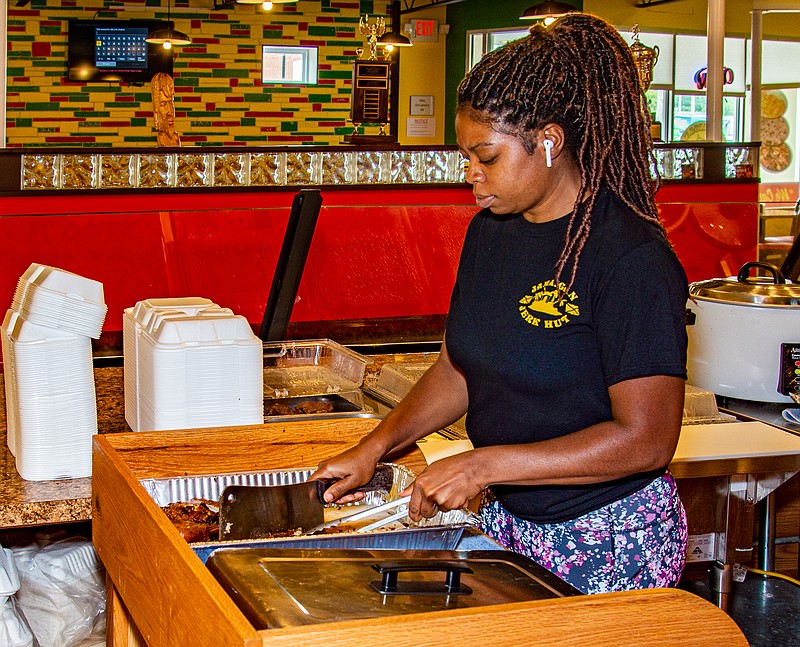 The road to opening a businesses can be curvy and - at times - seem to be unnavigable, but for several unique Jefferson City businesses, the journey began at Lincoln University and put them on the right path for success.

In 2013, Stallone Watson drove an old hatchback Hyundai with a salvage title for about 26 hours from his home in California to Jefferson City.

"I had no idea if the car could actually make it on the journey," Watson said with a chuckle. "I just prayed the whole entire way."

Watson came to LU on a track scholarship, and he quickly fell in love with Mid-Missouri's greenery and open fields, which was a stark contrast from his home in California.

"Track was my reason for coming to Missouri," Watson said. "Outside of that, I wouldn't have any other business here. But coming here basically showed me a different world that I wouldn't be able to grasp living in California."

While other Lincoln graduates moved back home or to a bigger city, Watson's newfound community made him want to stay and bring an idea to the marketplace that did not exist anywhere near. After doing some research, he found that french fries were the best-selling item at McDonald's, which led him to develop his new idea.

"Given that people already love fries and they'll go to McDonald's line just to get fries, why not experiment with this idea?" Watson said. "It sounds a little crazy, but that's why we call it Crazy Fry's."

Crazy Fry's opened in May at 1121 E. Miller St., and its menu is filled solely with french fry dishes, including savory and sweet options. The fries come with a variety of toppings, such as alfredo sauce and chicken or Nutella and fresh fruit. While Watson admitted the idea was a risk, he said its popularity in the community has proved it was worth it.

"The key thing is just taking a chance," Watson said. "It was a gamble, and I guess we win on this gamble. I'm truly happy that so many people gravitate toward it."

Looking back, Watson said his time at LU was key in where he is today.

"I'm happy to be a Lincoln alum because coming here really did open up a lot of doors for me that probably would have been a lot harder to get open if I was still in California," Watson said.

While Crazy Fry's is a relatively new business, many others have come before it.

Jefferson City's size and environment have made it a testing ground for Lincoln graduates to try their fresh ideas. The Jamaican Jerk Hut, which opened in 2005, is another example.

When Jerk Hut co-owner Rexroy Scott came to the United States from Jamaica to play soccer at LU, he had no idea of what he wanted to do in the future. His future became clear once he progressed through college.

"Attending Lincoln helped with being familiar with what it takes to start a business in America, which is as you can imagine, is quite different than what it would take to do it back home," Scott said.

Scott decided to stay in Jefferson City and open up a food truck that served Jamaican food, which was an unheard-of idea at the time in the area.

"It was not necessarily smooth sailing to start because the idea of a food truck in Mid-Missouri was kinda alien to most people," Scott said. "We initially faced the obstacle of convincing people to eat from a food truck - let alone to try a food from thousands of miles away."

The idea took hold in the community, and the Jerk Hut has grown into its own building at 112 E. Dunklin St. Scott said the community has been supportive, and many customers have been eating at the Jerk Hut since it started at LU.

There are countless businesses in the area founded by Lincoln graduates that provide a wide spectrum of services beyond food.

Dolli's Designs provides custom decor for events. It was co-founded by LU graduates Shalina Reed and Treana Cason. Reed wanted to attend an HBCU and be a majorette, and Cason came to the university because of the academics.

After graduation, the duo went to several cities across the United States to see where to move and start their business, but they did not like many places. The pair decided to stay in Jefferson City and start the business.

"It really was just by the grace of God," Reed said.

They echoed a similar sentiment to what the other LU graduates expressed. Each owner had a unique path to Lincoln. Some went for sports, some went for academics, but all were able to stay and open successful businesses.

"Somehow, someway, we ended up staying here in Jefferson City," Reed said. "It was God's plan."