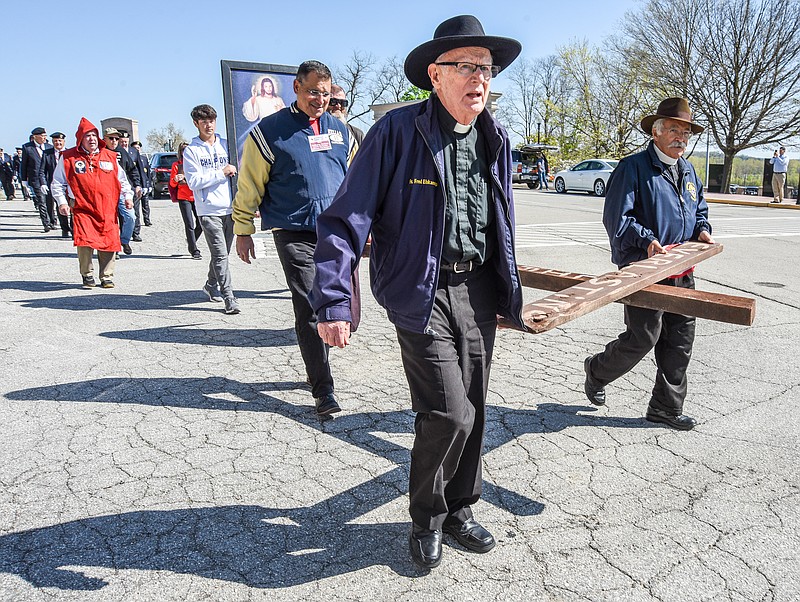 Julie Smith/News Tribune Retired priest Fr. Fred Elskamp, left, and Rev. Richard Frank carry the top portion of the cross as Fr. Anthony Viviano carries the post during Wednesday's Midwest March for Life which wrapped around the Capitol, proceeded to Madison Street then west on High Street to return to the Capitol. The line of marchers was long and they made their way through downtown.

Missouri is leading the nation in efforts to end abortion, speakers said during the 2021 Midwest March for Life, held Wednesday.

"Missouri has pioneered a movement that the nation is going to embrace on so many levels for life," said Lisa Rowe, chief executive officer of Support After Abortion. "You have started a revolution here in this state that has shown the rest of the nation what it looks like to be pro-life, defend life, stand for life and unite for life."

Rowe was among more than a dozen speakers who addressed about 2,000 listeners during the annual right to life event on the South Lawn of the Missouri Capitol.

Catherine Glenn Foster, president of Americans United for Life, pointed out that every generation is called to fight for the heart of the American spirit. She reminded listeners that the country's founders fought for opportunities to pursue real liberties.

Abolitionists fought to end slavery. Suffragettes fought for the right for every American's right to vote. Civil rights icons marched in the 1960s for equal protections guaranteed for all Americans, she said.

Those gathered Wednesday "get it." And the nation "gets it," she said.

Missouri lawmakers are passing laws that acknowledge and protect human life, no matter those lives' size, location or whether they had been given a prenatal diagnosis, she said.

She reminded listeners that on Tuesday an appeals court upheld an Ohio law banning doctors from performing abortions if they know the reason for the abortion is that the woman is seeking it because she knows her baby has Down syndrome.

The decision is an affirmation of the state's authority to protect "the least of these."

"The courts are waking up as the citizens of our nation continue to jostle them awake," Foster said. "It is a time for action, and it is a time for victory."

Foster was one of several of the day's speakers who stood on the Capitol steps and praised lawmakers for taking bold steps to protect the unborn.

"We are truly at a watershed moment - to change everything for the better," Foster said. "At a time when we can protect life in America and across the world."

She said the elevation of U.S. Supreme Court Justice Amy Coney Barrett created a solid pro-life majority on the court bench. That means state lawmakers across America, led by Missouri, will have opportunities to pass meaningful protections for pre-born and their mothers that won't be struck down by "activist pro-abortion federal courts."

"There are leader states and follower states. Missouri is leading the way," Foster said.

Leaders of the march on Tuesday recognized several lawmakers for their work supporting pro-life agendas. They recognized state Sen. Bob Onder, R-Lake St. Louis, as a Statesman for Life. Onder is a former board member of Missouri Right to Life.

Onder said he is merely doing his duty in protecting life. And since the U.S. Supreme Court decision in Roe v. Wade occurred in 1973, Missouri has been on the vanguard of the fight against "the scourge of abortion in our nation."

"And we have followed a steadfast strategy of work - of doing three things," Onder said. "Instituting common sense regulations to protect the health and safety of Missouri women. Enhancing informed consent. And most importantly, giving women the chance to choose life for their unborn children."

The strategy has been phenomenally successful, he continued. Missouri had more than 20,000 abortions in 1984 and fewer than 40 in 2020, he said.

When once there were a dozen abortion clinics in Missouri, now there is only one, and it is "on life support."

Despite success, the fight continues and a new threat looms, he said.

Under President Joe Biden's administration and a Democratic Congress, it is likely the Hyde Amendment, which prevents use of federal funds to pay for abortions, will be rolled back, he said. Before the amendment took effect in 1980, it paid for an estimated 300,000 abortions annually.

Missouri may be forced to expand Medicaid, he said, covering health care for a lot of "able-bodied folks."

"We could be forced to fund abortion through our Medicaid program," Onder said.

Last year, he pointed out, the General Assembly said in its budget that Medicaid money couldn't be used as reimbursements for Planned Parenthood.

"Only to have the black-robed tyrants right across there - on High Street - in the Missouri Supreme Court, tell us we couldn't do that in the budget," Onder said. "But, I've got good news for you, we can do it in statute."

Senate Bill 1 opens up all the Missouri Medicaid statutes and allows lawmakers to outlaw funding for Planned Parenthood in statute, he said.

Kehoe said he accepted the organization's award on behalf of the listeners in the crowd.

When he thinks about life, Kehoe doesn't think about himself, he said. He thinks about Carl Landwehr, who approached him with an idea for Vitae - to reach out to women who don't think they have a choice and needed a way to get the message on television. He thinks about people who approached him with the idea of joining the national 40 Days for Life movement. He thinks about Bridget VanMeans, chief executive officer of ThriVe Nation, who takes mobile pregnancy units out to women to share wellness and health opportunities. He thinks of Mike Hentges and Steve Smith, who started St. Raymond Society, which helps women who chose to have a child, to help raise that child and help them get back to work and get their feet underneath them.

"Last of all, I think of my mother, who had six kids to an abusive husband," Kehoe said. "Who had other choices. My mom raised me and my brothers and sisters to appreciate the moment we're at right here."

He pointed out the golden cross standing atop St. Peter Catholic Church, where it has been for 150 years, overseeing the people who have gone in and out of the current Capitol and its predecessor. It makes certain the ultimate sacrifice that cross stands for - to Christians - is understood in the Capitol.

"It's the message that we bring into this building - and that's the way we need to vote, think and act every day we're in this building," Kehoe said.

You can't underestimate the importance of a rally like that held on Tuesday, he said.

The men and women who work in all forms of government, protecting life, do it because of the crowd.

"They hear you in the hallways. They feel your prayers," Kehoe said. "They understand your passion."