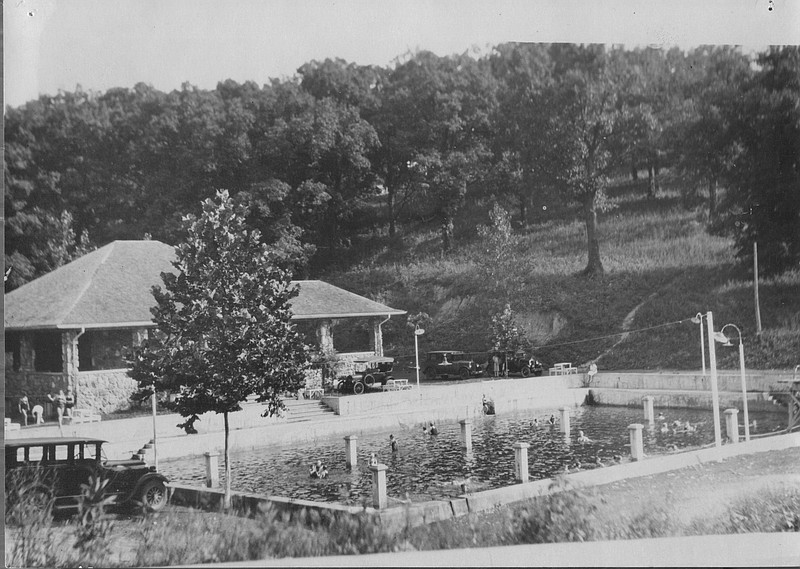 <p>Photo courtesy of Cole County Historical Society</p><p>McClung Park Pool, the first in Jefferson City, closed in 1946 due to an inadequate filtration system.</p>

McClung Park is the oldest in the city, built 1915-16, under the supervision of Warden Dickerson Clark "D.C." McClung using prison labor.

Architect for the project was Ward Newsome, a convict from St. Louis serving a two-year sentence for embezzlement.

In 1913, when McClung became warden, contract labor within the penitentiary was due to expire, leaving a large number of prisoners idle. The warden decided to employ them to beautify the tract of land already owned by the state, with the idea of eventually transferring the park to the city.

During the Civil War, battlement lines were drawn across this hilltop property to protect Jefferson City from an anticipated invasion by Gen. Sterling Price. The state developed two stone quarries here, using the rock for construction at the penitentiary.

A large crowd celebrated the grand opening in June 1916 with a barbecue dinner. There were speeches by Mayor Cecil Thomas, Warden McClung and other notable citizens.

McClung Park met a pressing community need. Because it had the only indoor facility of its kind, it quickly became the hub for a variety of social events - picnics, celebratory luncheons, fundraisers, dances, club meetings, church and school events, scout camps, reunions, a polling place, and a meeting place for business, civic and political organizations. Statewide conventions used the facilities, sometimes drawing as many as 700 attendees.

Before the park opened, the only other accommodation was the Jefferson City Country Club, which was private and located five miles away.

The Chamber of Commerce, then known as the Commercial Club, appointed a committee to operate the pool and tennis courts.

After D.C. McClung left office, his political adversaries petitioned the governor to change the name from McClung Park to State Park. He declined.

The City of Jefferson created a park board in 1930 to develop Washington Park on 27 acres donated by the Chamber of Commerce. Citizens were becoming more "park conscious."

The city purchased McClung from the state in December 1940 after 20 years of negotiations. It paid about $3,000 and agreed to vacate three unused streets at the penitentiary - Chestnut from East Capitol Avenue to the railroad yards and Linn and Water streets, which existed in name only. The city did not surrender water mains under the streets, and the prison board agreed they would make no changes to affect them.

The park was in need of immediate road improvements as well as renovations to the buildings. The entrance to the upper park, dance pavilion and shelter house was from Oakwood Drive. The city didn't own a small strip of connecting land, so a quitclaim deed was secured from George Wagner. Oakwood Drive remained the only entrance until 1989, when a new access was cut through to Chestnut Street.

McClung continued to be a popular meeting place. In June 1946, 700 members of Trinity Lutheran Church attended a homecoming celebration for World War II veterans of the church.

The swimming pool was abandoned in 1946 when it couldn't meet health codes. The pool was filled in, a parking lot was created, the bathhouse was renovated, and barbecue pits and picnic tables added. The Jaycee's Cole County Fair began here as the "Hog Show" in 1948.

The Park Board explored alternative uses for the property, but the former bathhouse largely stood vacant. In 1972, the Jefferson City Little Theatre leased and modified the building they still occupy.

With limited finances, the Park Board acquired additional property over the years, including seven acres from Lincoln University in 1955. They expanded parking and added a ballpark.

This rustic park continued to host community events such as President Harry Truman addressing the Missouri Federation of Women's Democratic Clubs state convention in 1956 and as a temporary home for Our Savior Lutheran Church in 1959.

JC Parks and Recreation Department extensively renovated the indoor pavilion in the fall of 2020 as part of their rebranding program. Storefront windows now afford a panoramic view of Jefferson City. An outdoor patio was added along with the playground and security cameras.

Today, McClung Park covers 22 acres. It received a Landmark Award from the Historic Preservation Commission in 1995.

During the 105 years of its existence, the park has undergone many repairs and restorations but still maintains its historic character.

Nancy Arnold Thompson is a retired medical administrator and former member of the Cemetery Resources Board for the City of Jefferson. Her hobby is cemetery preservation and restoration.