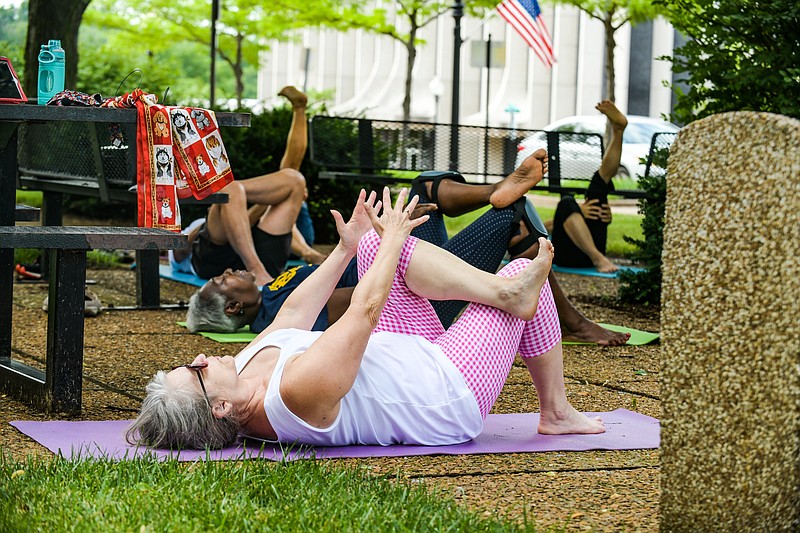 Julie Smith/News Tribune Yoga in the Park has returned to Missouri River Regional Library with Thursday seeing about one-half dozen people return to or attend for the first time to the outside activity hosted by the library. This was the first time in several months they’ve gathered for yoga and the small group assured there was plenty of room for social distancing. Alberta Mobley. at left, taught the class and frequently added to her directions the phrase “if you are able” as she wasn’t sure how many of them maintained a yoga routine at home.

With yoga, craft classes, movie nights and even mini golf, the library is much more than a place to check out a book — though they definitely do that, too.

But for a handful of winter months, the Missouri River Regional Library stopped in-person events due to COVID-19 concerns.

While many events have been held virtually — and will continue to do so — MRRL is bringing back some library favorites in-person to 214 Adams St. starting this month.

“We’re gradually working to this in-person place again,” library Director Claudia Cook said. “It used to be the norm so it’s something that we’re all looking forward to … but I don’t think virtual will ever totally go away.”

Though the circumstances were less than ideal, Cook said they learned virtual events can be beneficial to library patrons, and some such events will continue even once health concerns have subsided. She said they allow a wider audience to tune in, and being able to record virtual programs allows people to watch at their convenience.

Virtual events like storytime and sensory play for children along with book clubs and crochet classes for adults have and will continue to pack the MRRL calendar.

For the regular patrons though, Cook said, the return of in-person events is something to celebrate.

Attendees are asked to bring their own mat, water bottle, towel and any other yoga supplies desired, like blocks or ties. The program will be moved inside to the library art gallery in the event of inclement weather.

Another popular event returning this week is the First Friday Film series. On the screen at 7 p.m. Friday is “News of the World” based on Paulette Jiles’ bestselling novel and starring Tom Hanks.

Set five years after the Civil War, Hanks portrays Capt. Jefferson Kyle Kidd, who moves from town to town as a non-fiction storyteller sharing news from around the globe.

“We try to bring films that maybe aren’t in the theater … things that the community may not have exposure to but wants exposure to,” Cook said.

The films are geared toward an adult audience and tend to be thought-provoking, independent titles; though critically acclaimed comedies have also been shown. Past films have included “If Beale Street Could Talk,” “On the Basis of Sex,” “The Florida Project” and “The Zookeeper’s Wife.”

Typically held the first Friday of the month, the last film series event was in October, Cook said, noting she’s received numerous questions over the last five months as to when the event would return.

She said the film series has drawn as many as 50 patrons in the past, but due to safety concerns, 25 people will be admitted to the large meeting room space at the library. Registration for the free event is required, via the library’s website, and guests will be socially distanced and asked to wear a mask, she said.

Other in-person events making their return in the coming weeks include some computer classes and book discussions as well as family-oriented craft projects. Visit the Missouri River Regional Library’s website for a more complete calendar.

Later in the month, Cook said staff is excited to bring back the MRRL Foundation’s mini golf fundraiser. The April 18 event turns the library into an 18-hole miniature golf course. Typically held in February each year, Cook said they were pleased to be able to reschedule the popular family event.

A lot of people have been stuck inside for so many months, Cook said, noting she wants people to know “the library is a place where people can safely congregate again and bring some normalcy back to their lives.”