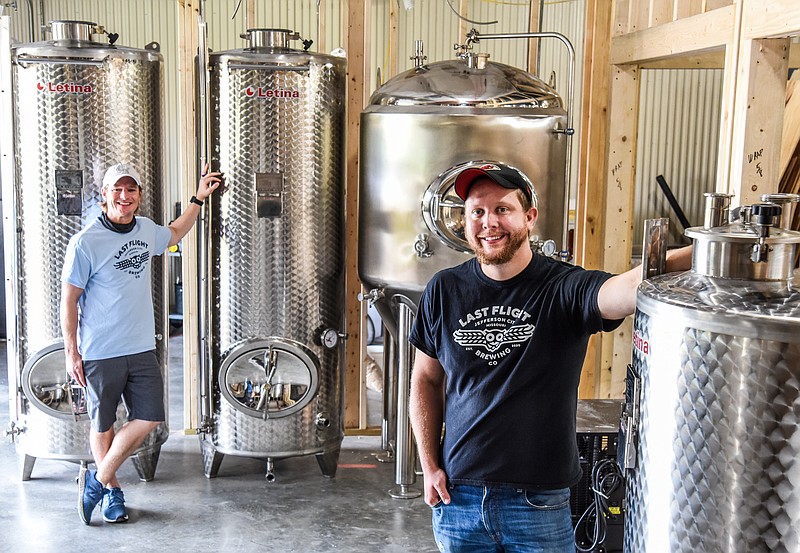 Julie Smith/News Tribune Cousins Mark Cowley, left, and Jared Cowley pose for a photograph inside the brewing chamber at Last Flight Brewing Co., at 732 Heisinger Rd. The building had previously been housing Cowley Distributing until the business sold. The cousins enjoyed brewing beer so decided to make a go of a business to make their favorite brew and serve it to the public.

A new brewery is on tap to open later this year in Jefferson City, and the cousins operating it believe it will provide another family-friendly option to the community.

Last Flight Brewing Company will have 12 beers on tap - including lagers, IPAs, porters and stouts - but those beers will alternate as the cousins experiment with more brews.

"We're going to pretty much make everything except for your typical light beer," Jared said.

The Cowleys said they currently have about 40 beers they have brewed that have been well-received.

If enough customers ask for a certain beer, the Cowleys said, they will try to recreate it.

"One of my wife's favorite beers is Schnickelfritz, and Jared said we could brew something like that," Mark said. "Of course it's not exactly like that, but it's a variation of a beer that she likes. So that's an example of, if enough people request a certain type of beer, we'll try it out."

Customers will be able to see the equipment the Cowleys use to create the beers. Located behind the counter are two large windows, showcasing the large brewing metal kettles.

"From that grain, it's going to travel about 50 feet until you drink it," Mark said. "It's about as short of a process that we could possibly do."

While the Cowleys do not plan to serve food, they hope to attract food trucks to their business.

"It's not going to be about staying here until 11 o'clock drinking beer as much as you can," Mark said. "It's going to be: Come by, get your growlers, hang out for as long as you want, bring your dogs and your kids. It's a place where people can come to spend time with their families."

While walk-in traffic will be the primary focus, the cousins said, they will provide some canning options so people can take their beers home.

Before Last Flight Brewing Company can open, though, the Cowleys have to renovate the open warehouse space, including adding walls and adjusting plumbing and electricity.

The cousins plan to post construction updates and the beers they are brewing on their Facebook page, facebook.com/Last-Flight-Brewing-Company-102022644670575.

Jared began brewing beer about 10 years ago, but he became serious about the career path a couple of years ago.

The cousins worked for their family business, Cowley Distributing Inc., but decided to look for new careers when the business closed.

"When it came time that we had to figure out what we were going to do professionally, we decided we would rather work for ourselves and start our own family business," Jared said.

The Cowleys hope to one day offer their beers on tap at other bars in Jefferson City.