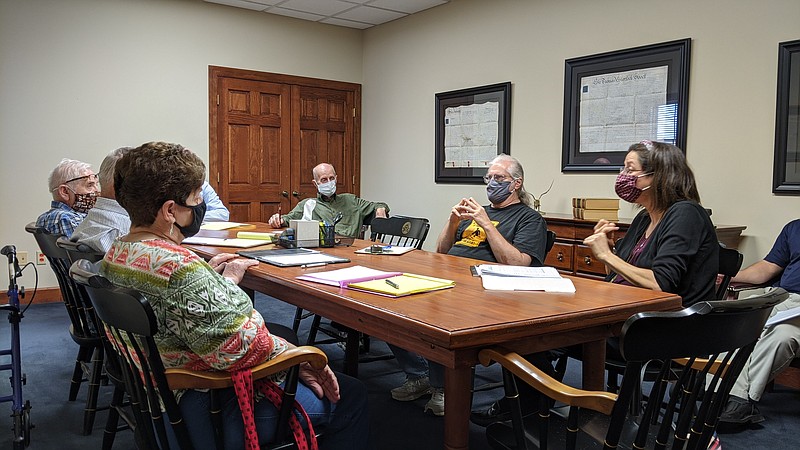 Members of the newly reorganized Callaway Senior Center board hope to forge a sustainable future and leave recent conflicts behind.

"I'm hoping this is the start of a new chapter here, and we can forget the last two or three chapters," president Charles Ausfahl said Thursday during a board meeting.

But those chapters dogged board members during a meeting Thursday with Aging Best CEO Rebecca Nowlin. Nowlin said Aging Best would be willing to resume administering its senior nutrition program through the senior center, but things won't go back to the way they were before.

No final decision was made during Thursday's meeting, which took place in the law offices of Riley & Stingley. Lawyer Tom Riley is currently representing the senior center board.

The Callaway Senior Center, located in Fulton, is owned by the CSC's elected board. Years ago, the board partnered with Aging Best to coordinate a nutrition program. Each of Missouri's 10 area agencies on aging, including Aging Best, receives federal funds through the Older Americans Act. With these funds, they're required to provide services including home-delivered and "congregate" meals within their service areas, among others. Aging Best rented space in the center; paid for the center's phone and internet service; and employed a cook, a dishwasher and center administrator.

That relationship dissolved earlier this year after senior center administrator April Redman was fired, following weeks of conflict between Redman and Aging Best about the nutrition program and its funding. But, Nowlin said, the Aging Best-CSC relationship "soured" years ago.

"Part of the issue has been that people at the Callaway Senior Center have very specific ways they want to do things," Nowlin said. "They've resented us for years. Maybe 15 years ago, there was a little negativity, but over the years, it's become the overarching culture there."

Ed Barrioz, the CSC's assistant treasurer, who has also served on the board previously, said some tension resulted from seeing past senior center administrators spend most of their time on Aging Best-related paperwork instead of running the center. He also felt Aging Best put too many restrictions and demands on the center.

"I just began to feel it wasn't our senior center anymore," he said.

Nowlin said the administrator's role was always supposed to be limited to running the nutrition program.

"I've been around for two years and in those two years there have been multiple instances of infighting and fighting with our staff," she said. "There have also been multiple allegations of people being made to feel unwelcome in the center and racism."

"There's been a few people who did volunteering at the center and objected to the way new volunteers did things," he said. "Those people drove the new people off."

Schneider said he hopes the senior center can increase its outreach and attract more racially and socioeconomically diverse patrons and volunteers in the future. In fact, Nowlin said, Aging Best is obligated by law to make sure the Older Americans Act funds reach the people who need it most, which will mean expanding the senior center's clientelle.

In September, Aging Best's board voted to sever the Aging Best/CSC relationship altogether. Aging Best is now serving curbside meals at SERVE, Inc. and delivering meals to homebound individuals through its senior centers in Audrain County and Jefferson City.

As laid out during the meeting, the Callaway Senior Center now has three options.

First, they could strike out on their own without a relationship with Aging Best or access to Older Americans Act funds. Board members quickly dismissed that option as too expensive to sustain.

Second, they could subcontract with Aging Best, allowing them to access the OAA funds - which the senior center could then use to pay for personnel (including a senior center administrator), food and other expenses related to the nutrition program. This would require the senior center to conform to certain federal requirements in how it ran the program and spent the funding.

Aging Best has sent out a request for proposal inviting Callaway County-area agencies to apply to subcontract with AB. Nowlin said CSC is welcome to apply and could even hypothetically partner with other area nonprofits to run the program.

"That's more than $10,000 a month," Barrioz pointed out. "I have a hard time believing we couldn't pay for some combination of administrator, cook and (dishwasher) for $10,000 a month."

Schneider noted the money would also be covering frozen meals for homebound deliveries, which have become vastly more expensive during the pandemic.

Nowlin opened the door to a third option Thursday: Aging Best could resume providing "direct services" at the senior center, once more providing an administrator and eventually resuming congregate meals in addition to homebound meal deliveries. Nowlin made it clear Aging Best is trying to move away from providing direct services but is still willing to do so when no other viable options exist in one of the counties it covers.

"I'm not totally against anything," she said.

That arrangement wouldn't solve all of the senior center's challenges.

"An ongoing issue at the senior center is that it's really expensive to run, partially because of the large building," Nowlin said. "We've never been able to (agree on) how to offset that cost."

And the administrator would focus strictly on the nutrition program, not the day-to-day business of running a senior center.

As Callaway County United Way Director Megan Prenger pointed out, all options will require the board to do more work fundraising, coordinating volunteers, arranging for building maintenance and filing out grant proposals.

"You'll have to know (Aging Best's) employee will be in the office doing paperwork - she won't be doing everything April did," she said. "If you go back, there's going to be a clear-cut line as to what (the administrator) will do. You'll have to step up."

Help could come from the Callaway Chamber of Commerce. Chamber Director Tamara Tateosian also spoke to the board Thursday, stating she and her staff be willing to help with publicity and brainstorming fundraising ideas.

Nowlin also expressed worries "within a month, everyone would just be unhappy again." Any relationship between Aging Best and CSC going forward will be more formal and defined through a proper contract, instead of the single-page "gentleman's agreement" the two entities used for years, Nowlin noted.

"Because of all this, we've realized we need to have more formal contracts," she said. "(The old contract) is a horrible document - it hasn't been updated in 45 years."

Discussion between Aging Best and the senior center will continue in the coming weeks.

"A partnership can only work if both sides will work together," Ausfahl said.