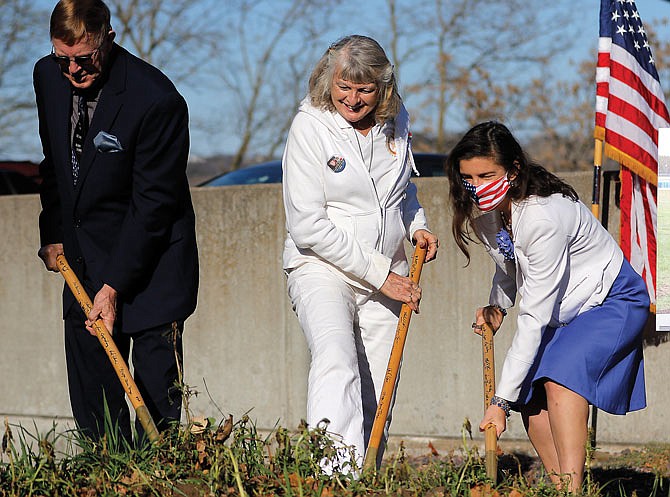 From left, Don Hentges, Sandy Deraps and Mayor Carrie Tergin participate Wednesday in a groundbreaking ceremony for a Gold Star Families Memorial monument outside of the Missouri state Capitol. The monument will feature fragments of a wall commemorating Gold Star families and their lost loved ones, as well as a cutout of a saluting soldier to represent the continuous memory of those who have lost their lives in military service.

On Veterans Day 2020, ground was broken for a memorial military families hope will become a place of healing and friendship for those who have lost a loved one in service to the country.

The Mid-Missouri Gold Star Families Monument will be placed at the entrance for the new Bicentennial Bridge, which is adjacent to the Missouri Veterans Memorial on the north side of the Capitol grounds.

A Gold Star Family has a family member who served in the military and died in the line of duty. The honor dates back to World War I when families of service members displayed flags featuring a blue star for every member of the immediate family who was serving in the war. If one of the family members died, the star's color would be changed to gold.

The monument is intended to "increase public respect and appreciation for the tremendous sacrifice made by members of our Armed Forces who have given their lives in defense of our country; help make us more mindful of the great sacrifices made also by the families these heroes left behind; and inspire us to do more to make our country worthy of the sacrifices made on our behalf," according to a news release.

Gold Star mother Sandy Deraps, whose son, Lance Corp. Leon Deraps, was killed in action in Iraq in May 2006, told the crowd at the ground breaking the monument will serve as a reminder that, "we are free because of their sacrifices."

"From the very moment we learned of our loss, our lives changed forever," she said. "It is my hope that this memorial will become a place of healing and friendship and those that come here will connect with other families and share their stories of the ones they have lost. As long as we speak of them, they are not gone."

The Mid-Missouri Gold Star Families Memorial Committee has been working to raise the $125,000 it will cost to build the monument.

Sharon Naught, committee co-chairwoman, told the crowd the memorial would be one of only five such memorials to be located on the grounds of a Capitol.

"The front side of the memorial will pay tribute to Gold Star Families and relatives who have sacrificed their loved ones for our freedom," Naught said. "On the other side of the monument are scenes etched on four panels: homeland, family, patriot and sacrifice. At the center of the monument is the silhouette of soldier/service member which represents the legacy of a loved one who paid the ultimate sacrifice for our freedom."

The committee is committed to having the monument in place by Aug. 10, 2021, in time for the state's bicentennial celebrations.

To donate to the cause, go to hwwmohf.org and specify the Jefferson City monument, or mail or drop off a donation to Legends Bank, c/o Rosie Verslues, 130 E. McCarty St., Jefferson City, MO, 65101. Checks should be made payable to "MMGSFMM."

All donations are tax deductible.