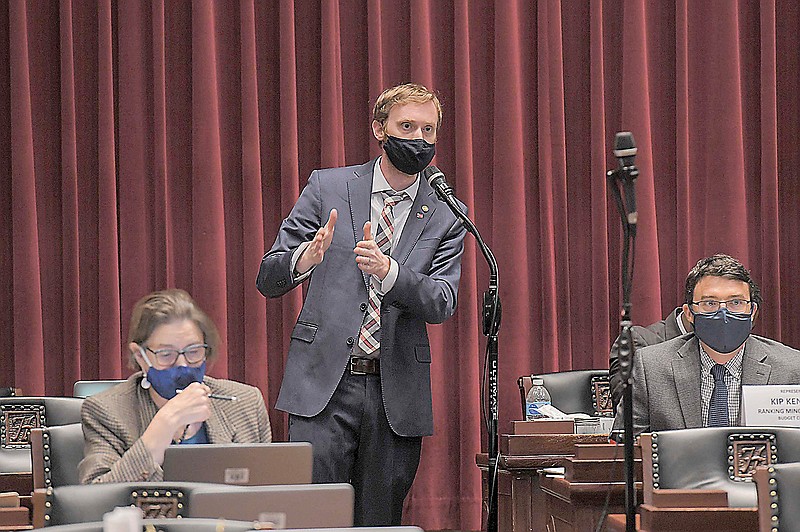 This article is free to all readers because it includes information important to public safety and health in our community.

It's the state's intent to spend every last bit of remaining unspent federal pandemic aid before the chance to do so expires Dec. 30, the state budget director told the Missouri House budget committee Monday.

Challenges to achieving that, however, will include making sure no money is left on the table as counties work to determine how much money they will spend, as service providers navigate sometimes vague federal spending guidelines and as the state wants to allow eligible expenses to be charged right up until the deadline.

The budget committee met Monday during the special legislative session called by Gov. Mike Parson to budget for more than $1.2 billion more in appropriations for the current fiscal year.

State Budget Director Dan Haug told the House committee those appropriations include aid that was not spent in the previous fiscal year, grants the state didn't know about in calculating the budget in May, money freed up by changes in spending guidelines, and spending authority for money previously given to counties but the counties may return to be spent elsewhere if they won't use it before the end of December spending deadline for federal Coronavirus Aid, Relief and Economic Security Act funding.

Haug said the counties have spent almost $128 million of the $520 million given to Missouri counties through the CARES Act.

He said it's an educated guess that counties may voluntarily return $300 million to the state, which could be instead spent on other eligible expenses related to pandemic response - including testing for coronavirus, the purchase of personal protective equipment (PPE), and expenses for sanitizing and remote learning.

Haug said there's been communication with counties to inform them if they don't plan to spend all the funds they've received then to please return it.

Budget committee Chairman Cody Smith, R-Carthage, said it's been challenging for the state and counties to navigate federal spending guidelines, and the state has not imposed any barriers to counties' spending of the money.

Smith said, "We should see an accelerated spending from here to the rest of the year."

He added the appropriations authority also exists for counties to be able to request more of the remaining CARES Act money, should they need it.

It's not only counties that have collectively spent little of the aid allocated to them.

Haug said child care providers have spent $268,000 out of $12 million allocated to them.

"We're trying to get them to spend that money, but as of yet, not much (in the way of billed expenses) has come in."

Rep. Peter Meredith, D-St. Louis, suggested that's due to it not being clear in the reimbursement process that child care providers can use CARES Act money for lost revenue due to disruptions to their business because of the pandemic.

Alex Tuttle, with the state Department of Health and Senior Services' Office of Governmental Policy and Legislation, said DHSS would be happy to work with providers on their questions about that.

Haug said, "The feds didn't give us an item by item list" of what eligible expenses under the CARES Act include, so there continues to be some interpretation involved.

He added private colleges and universities face somewhat of a gray legal area as to whether CARES Act money can be used for business interruptions, and it's institutions' discretion how much they want to spend with the possibility they may have to pay it back to the federal government.

Haug said of $10 million allocated to private higher education institutions, about 14 percent has been spent so far, but that programs are still getting started.

Public institutions have spent about 77 percent of the $80 million allocated for them, and he expected the rest would be spent.

Haug said the state intends to order a total of $210 million in PPE - $117 million has been ordered so far, of which a little less than $80 million worth has been received.

He said the Federal Emergency Management Agency would reimburse 75 percent of those PPE order expenses, and that reimbursed $150 million-$155 million could be used on other eligible CARES Act expenses.

Haug said it would be helpful if Congress gave more time and flexibility for the use of CARES Act money.

He said the hope is to be able to charge in January or early February expenses billed by Dec. 30, as those expenses may not come in until that time early next year.

"That's the tightrope we're trying to walk," he said - trying to have a good idea by the end of the year how much is left over so it can be spent before lost, trying to get bills in as quickly as possible, but also trying to not cut off needed services any earlier than needed.