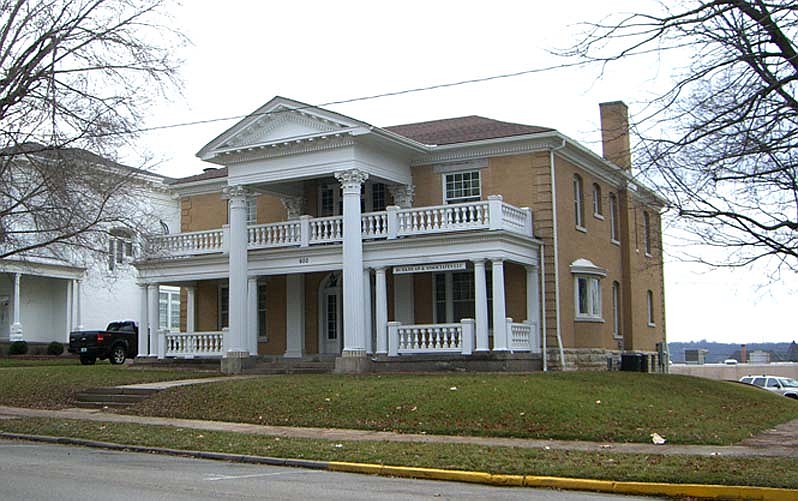 <p>Courtesy of Jenny Smith</p><p>The Dallmeyer Home at 600 Capitol Ave. in Jefferson City saw three generations of a prominent family grow. It was the flagship of historic renovations along the historic corridor, led by its last owners, Frank and Carol Burkhead. Lost as the result of the May 22 tornado, it came down Dec. 13.</p>

The imposing blonde-brick, two-story home which set the tone for the revitalization of Capitol Avenue may be lost to the present-day eye. But the memories from generations of the Dallmeyer family, as well as the concerted restoration by Frank and Carol Burkhead, are forever written in the community history.

The original one-story, red-brick home at 600 E. Main St. faced west. An addition including a second story was added about 1875. Then, in about 1910, it was remodeled in a neo-classic style.

The first front door, facing Marshall Street, was filled in with an ornate dining buffet and the new front door and portico flanked with fluted, Corinthian columns. The second-story porch may have been added in the 1930s.

Col. William Quintilis Dallmeyer bought the double corner lot in 1869. He reared five children there with his wife, Sophie Louisa - Ferdinand, Pauline, William Augustus, Rudolph and Viola. East Main Street, at the time, was becoming the premier residential street for the prominent and wealthy, anchored by the Missouri State Penitentiary. The businesses they operated were close by in the prison factories, downtown and the Capitol.

In 1845, Dallmeyer immigrated from Dissen, Hanover, (later Germany) at the age of 16, first working as a dry goods clerk in New York City and then in the commission business in New Orleans. By 1854, he was in the dry goods business in St. Louis. Two years later, he established a general store at Cooper Hill in Gasconade County, where he farmed while also serving as postmaster at Woolam and justice of the peace.

He earned the title colonel after serving in the Civil War. He enlisted in September 1861 with Company B of the Osage County Home Guard, or Captain Cooper's Home Guard. And later, he led a Six Month Missouri Militia called Dallmeyer's Battalion.

Gasconade County elected him as its state representative in 1864 and 1866, serving as chairman of the ways and means committee. In 1868, he was elected as the 10th state treasurer at a salary of $3,000.

After his government service, he stayed in the Capital City, where he opened a dry goods store and became a force in the financial industry. William's youngest brother, Rudolph, immigrated to Jefferson City in 1874 to help his brother and eventually opened his own dry goods store at 206-208 E. High St.

In 1871, along with Nelson Burch, he organized the First National Bank, absorbing the Capital City Bank. Dallmeyer was elected cashier from 1874-82. Then he bought a controlling interest in the Exchange Bank in August 1882 and became cashier. Later, he was elected president of Exchange Bank in 1907.

"Col. Dallmeyer, while an enterprising and progressive citizen, who has been identified with the progressive spirits of the Capital City since he made it his home in 1868, is a man of prudence and fine judgment, who ranks with the best financiers of the state," according to the 1900 Jefferson City Sketchbook.

"Under the direction of his well-balanced mind his movements in life have been attended with uniform and substantial success. His sterling integrity and prudent business judgment has been a great factor in making the Exchange Bank one of the greatest financial concerns in Central Missouri."

For many years, he was the president of the Missouri State Fair board. He also was a state agriculture leader, particularly in the American Hereford breed.

Augustus married Olive Ewing in 1898. They lived across Main Street from the family home until William Q.'s death in 1908. Augustus and Olive had three children, whom he continued to rear after her death in 1924. Kathrine married Judge Robert Otto, and William Jr. was killed accidentally in 1932 while a student at Princeton University. Robert followed the family business at Exchange National Bank.

After nearly a century in the hands of the Dallmeyer family, the distinguished property became efficiency apartments and later office space for the Missouri Police Chiefs' Association.

In the last decade, Frank and Carol Burkhead renovated the building, retaining much of the original architectural features, and had installed two sets of pocket doors from the Louis Lohman House, razed in 2003 in the 900 block of Jefferson Street.

A city landmark, 600 Capitol Ave. was listed on the National Register of Historic Places, where the architecture and its residents will be remembered.

The Dallmeyer House was demolished in December 2019.

Michelle Brooks is a former reporter for the Jefferson City News Tribune. She particularly is interested in recording the history of city-designated Landmarks.