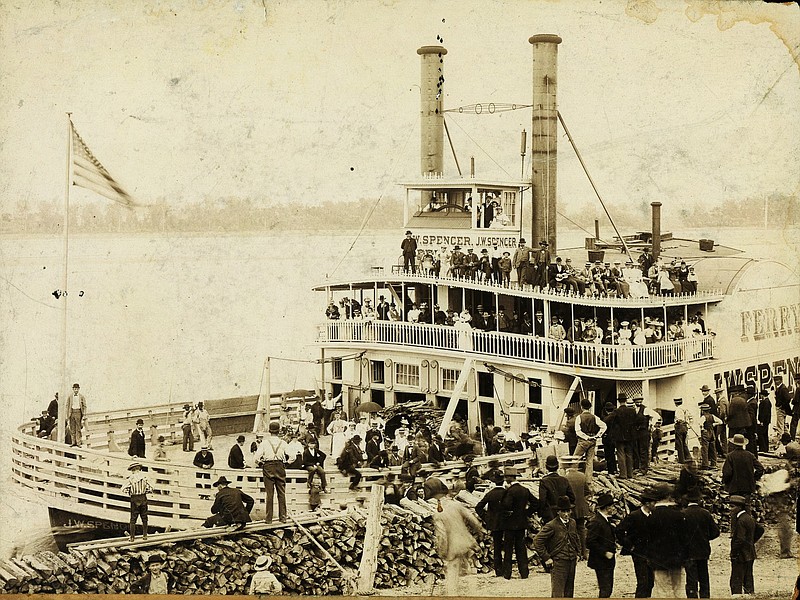 <p>Courtesy of Missouri State Archives</p><p>Steamer J.W. Spencer at the dock in Jefferson City, where it provided ferry service locally until the construction of the first bridge in 1896.</p>

The history of the steamboat on the Missouri River is a relatively long one, covering a span of approximately 100 years, but its year in service varying significantly from region to region.

The first steamboat, Independence, appeared on the Missouri River in 1819, making several trips up the river as far as Franklin. The steamer Independence arrived in St. Louis in early May and on May 15 left St. Louis, arriving May 29 at Franklin after making several stops at landings along the way. On its second trip, the Independence became the first steamboat wreck on the Missouri River at Cote Sans Dessein in 1819. In 1883, a man who was a youth at the time recounted to the local newspaper in Fulton that his father was so captured by the event that he made the trip from the New Bloomfield area to Franklin to see, firsthand, a steamboat.

The steamboat, from 1819 until approximately 1835, was primarily for military use and supply of the growing fur trade in the west. After 1835, it rapidly became available for use by the general public. The construction of steamboats was privatized, and as the boats were constructed, they found many waiting buyers with cash in hand. The private use of steamboats rapidly spread on the rivers of the United States, including the Missouri River. For the first decade, there was not one concerted plan that provided widespread coverage of transportation of people, goods and services, but the steamer competition gradually developed on a relatively local basis.

In 1848, you see the first signs of what was referred to as packet service. That was essentially a commuter and transportation service, where departure and arrival times and locations were advertised in local newspapers. This was the golden era of the steamboat on the lower Missouri River. During this period, the number, size and opulence of those steamers grew. At any point in time on the lower Missouri River there would usually be at least two steamers in sight. Many of the steamboat landings that existed along the Missouri River in the area of Cole and Callaway counties were documented on the maps of the U.S. Army Corps of Engineers surveys of 1879, published by the Missouri River Commission in the early 1890s.

In September 1858, two railroads were completed that crushed competing steamboat traffic in the affected area, and the advertisements of packet service in that area completely disappeared by late November 1858. Those railroads were the Hannibal and St. Joseph and the North Missouri Railroad, both terminating at St. Joseph - one beginning at St. Louis and the second at Hannibal. As a result, the steamers in this area of the river were either pushed further up the Missouri River, where there was no railroad to compete with, or to the rivers in the agricultural south where few railroads existed.

The coming of the Civil War completely changed the outlook for the steamboat. As a result, steamers fled to the southern states or were seized by the federal government for use for supply and troop movement to supplement railroad transportation, which was constantly under attack by guerrilla forces in areas sympathetic to the southern cause. During the years of the Civil War, more steamers were lost than at any other time in their history. Some were lost because of direct conflict and others because they were forced into missions where there were many dangers in the river.

After the close of the Civil War, the remaining steamers either moved into the waters of the Upper Missouri River, converted to local ferry service or moved on to smaller rivers like the Osage and Gasconade, where they could successfully compete. These steamers were more of local design and construction, and smaller in size, lacking the opulence of their former state. On these smaller rivers, they were highly important to local transportation and some persisted into the 1930s, when better railroad service and suitable roads and bridges made steamboat transportation less feasible.

The use of steamers for local ferry service was rather sparse and spotty but took hold where there was sufficient commerce to support it. Ferries existed in locations where major roads without bridges encountered a river or stream. The John L. Ferguson served at Jefferson City and at Huber's Ferry where current U.S. 63 crossed the Osage River. That ferry service would lapse soon after the construction of a bridge at that site, as did the ferry J.W. Spencer, which stayed in the Jefferson City area for several months after the completion of construction of the Missouri River bridge in 1896. The steamer was purchased by other investors and moved to provide ferry service in the St. Charles area. Slowly, the steamers disappeared from use and from our memories, but they remain a significant piece of the history of transportation in Central Missouri.

Wayne Johnson is a Jefferson City native and retired engineer and chemist. For the past two decades he has worked closely with four local historical societies, setting up websites, digital imaging, search and retrieval of those images and now compiling brief general histories of people, places and events in Callaway and Cole counties' early history.