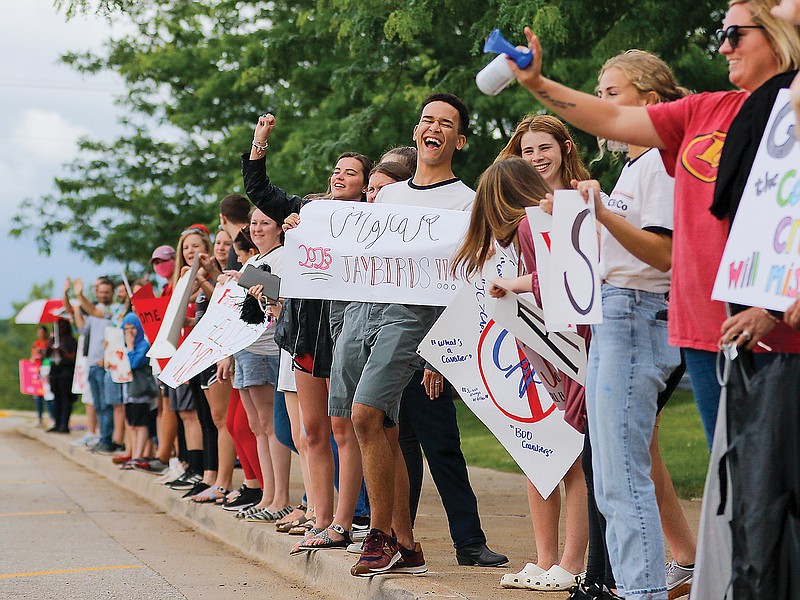 Maxwell Ntalamu, center, laughs with friends while cheering on the eighth-grade graduating class of 2020 at Lewis and Clark Middle School during a drive-thru promotion celebration Wednesday at the school.

LCMS Principal Deanne Fisher said it was important to the staff to celebrate the eighth-grade students in person.

"We wanted to be able to celebrate them in some way, and cheering and letting them know we're proud of them and that we're excited for the next step as they become Jeff City Jays was really the best thing we could provide given the circumstances," she said.

TJMS normally has a last day of school send-off similar to Wednesday's event with staff gathering in front of the building, but buses typically leave instead of cars driving through. TJMS behavior interventionist Paula Smith said this year's event was longer than the typical send-off.

"It was awesome, because it allowed them to celebrate in a way that we don't normally get to do," she said.

Students usually receive awards and certificates at Lewis and Clark Middle School's eighth-grade promotion. This year, staff sent a video to parents that announced the awards, and they will send certificates to students.

Jane Barlow, who teaches English as a second language at both middle schools, said it was important to her to attend one of the events to let the students know she cares about them.

"It's been kind of a challenging time for them trying to learn from home, and I want to let them know that I appreciate everything they've done and I appreciate their hard work," she said.

"We've missed our babies so much for so long, and to see them again and give them the send-off that they've earned through their three years here was just phenomenal," she said.