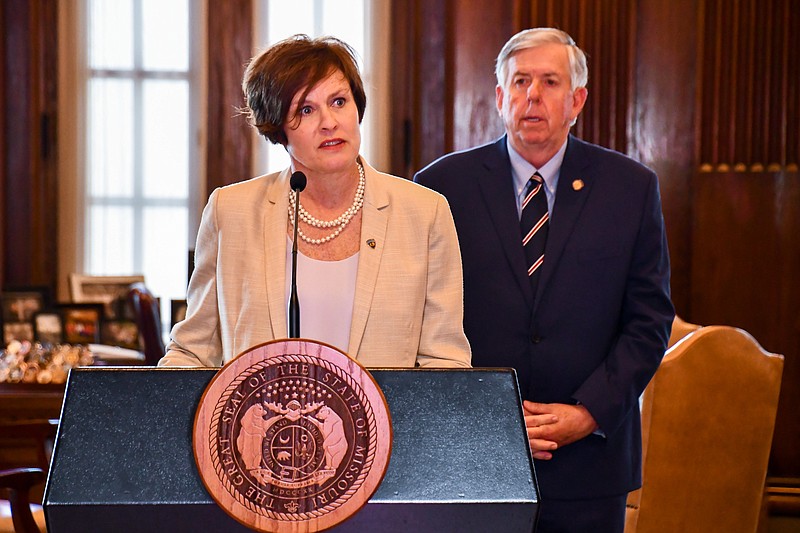 Missouri Department of Corrections Director Anne Precythe speaks during a COVID-19 briefing Tuesday, May 26, 2020, as Gov. Mike Parson looks on.

The Missouri Department of Corrections has the capability to test everyone in its adult system for COVID-19, and the department's multi-phase testing plan includes Jefferson City's Algoa Correctional Center.

There are approximately 32,000 people in the adult system, including offenders and staff, said Anne Precythe, director of the Department of Corrections.

In addition to testing people already showing symptoms and those who may have been exposed to the novel coronavirus that causes COVID-19, Precythe said the department is developing a comprehensive sentinel testing plan.

Sentinel testing is a process of testing most or all members of a large group of people living or working together in close contact, even if there are no known cases of COVID-19 in that location, according to DOC spokesperson Karen Pojmann.

Currently, only one DOC facility, Southeast Correctional Center, has experienced an outbreak of COVID-19.

"Before, during and after this process takes place, we will continue to follow the viral containment plans implemented at all facilities," Pojmann said. "If some members of the corrections community test positive for COVID-19, we will continue our strategy of isolating offenders and sending staff home."

Precythe said the goal is to test 3,500 staff and offenders over four days.

Testing will take place at Algoa and Chillicothe correctional centers beginning May 31.

Missouri National Guard medics and DOC staff started testing at Southeast and South Central correctional centers at 6 a.m. Tuesday - with everyone being properly fitted for N95 respirator masks and other personal protective equipment, she said.

The testing would continue over four days, with a target of testing 875 people per institution per day, Precythe said.

Results would come back within 24 hours, she said.

She said the data from the first four facilities will be used to refine and adjust processes as testing continues at other prisons.

DOC officials said they had not decided when testing will take place at Jefferson City Correctional Center, but it will depend on how the first two rounds of testing go.

If everyone at a site tests negative, Pojmann said, it means what they're doing is working.

"It does not mean the public health crisis is over," she added. "It also does not mean we can immediately return to 'normal.' However, the test results can help us to keep your loved ones safe and can give us the information we need to make informed decisions about the future and a gradual return to more regular operations. This testing is a necessary first step to helping you reconnect safely with your loved ones."

Visitations at all prisons have been suspended through June 18.

Beyond that, Precythe said all new offenders are being screened at in-take, and with the new availability of supplies, all new arrivals at in-take will be able to be tested.

Missourians who live in any county can go get tested where the state is beginning a new round of community testing - sampling intended to give a better picture of the prevalence of COVID-19 in the state.

Any Missouri resident who wishes to be tested at those sites can do so without cost to them - and they do not have to be showing symptoms, he added.