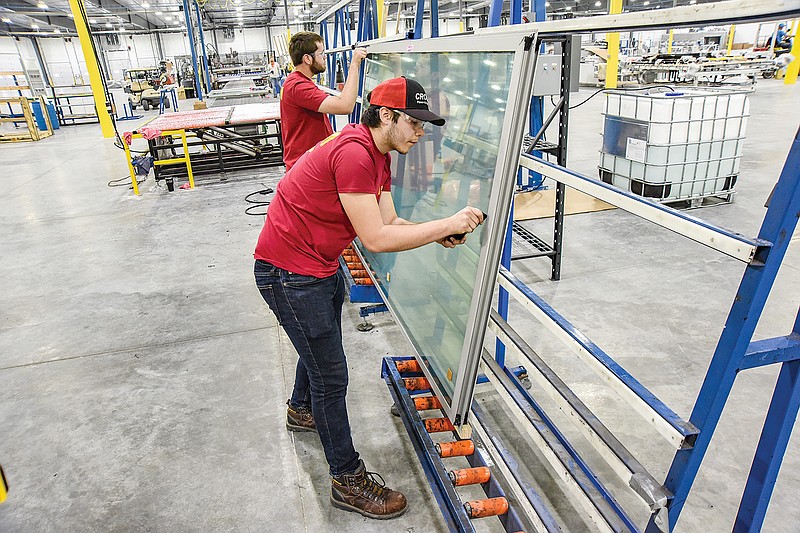 Eldon High School seniors Blake Smith, near, and Jordan Laughlin scrape residual silicone seal from the large commercial-size window made at Quaker Window in Eldon. The Freeburg-based company just opened their newest facility in Eldon, 200,000 square feet under roof designed to be a commercial production facility with showroom and management office space.

Quaker Window Products is hiring for its new factory in Eldon - an expansion of the company's commercial windows manufacturing that's intended to open new doors to more business.

Commercial windows - all aluminum-framed - are the kind used in hotels, including the hotel being built on the site of the old St. Mary's Hospital, Sifflard said.

Quaker Windows' Eldon plant is only just beginning to come online. Sifflard said a grand opening is not expected until late September or early October, once multiple production lines are operating.

The first production line is still being set up, Sifflard said, but the first employees are at the plant, having been trained in Freeburg.

When all four production lines in Eldon are online, Sifflard said, the plant will employ about 200 people, including those working at the plant and in offices to support them.

Despite the impact to the economy because of the COVID-19 pandemic, he said the outlook for the company's market still looks good.

He said there probably will be a bit of a downturn in the number of projects, especially in the commercial sector but added the company just had one of its best Aprils ever in the residential market.

Sifflard said people spending more time at home will want to incorporate more glass into their homes - including for better access to their backyards and decks.

"We're adding to our workforce," he said - and that includes hiring for the Eldon plant and some openings in Freeburg.

Sifflard said entry-level positions are available, and the average full-time pay, with benefits, is approximately $15 an hour, after the first 90 days.

Career opportunities with the company are available at quakerwindows.com/careers/.