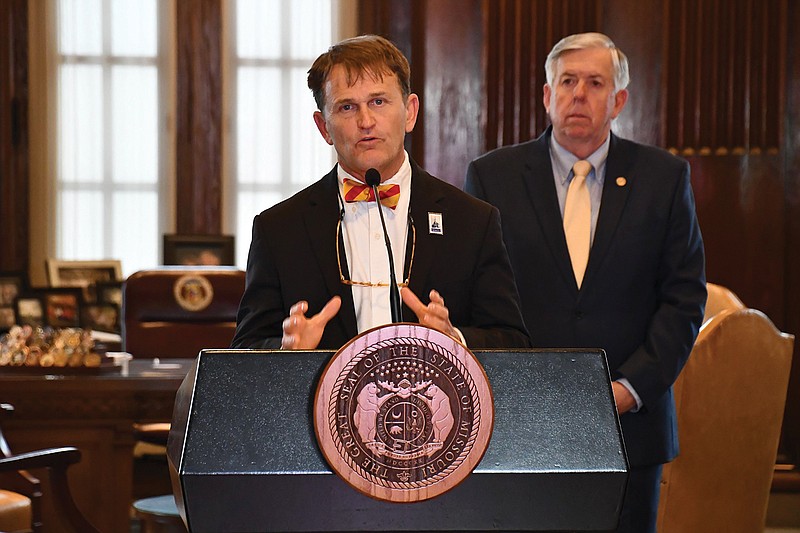 Dr. Randall Williams, director of the Missouri Department of Health and Senior Services, speaks Monday during a COVID-19 briefing as Gov. Mike Parson looks on.

Missouri's governor and public health leader announced Monday the state has changed its criteria for testing, with all Missourians with symptoms of COVID-19 being encouraged to be tested, coupled with a push to test everyone at places such as nursing homes and meat-packing plants.

"We're kicking up testing into another gear," said Dr. Randall Williams, director of the Missouri Department of Health and Senior Services.

The state began easing public health restrictions on businesses and activities May 4, though social distancing orders remain in place through at least the end of the month.

"We really want to encourage Missourians, as we move into this, that if you have any symptoms - muscle aches, fever, cough, anything - we want you to get tested. We want to see exactly how we're doing as things change," Williams said.

According to testing guidance on DHSS' website, the increased emphasis on testing is part of efforts to understand more about the novel coronavirus that causes COVID-19 - the virus' composition, transmissibility and resiliency - as well as to better trace and contain infections.

"Some people with the virus do not show any symptoms at all, which is why we are working to identify these individuals and isolate them as quickly as possible," Gov. Mike Parson said.

As of Monday afternoon, there had been a total of 10,945 reported cases of COVID-19 in Missouri since the first case in the state was confirmed in early March - though most people infected have already recovered or are recovering at home, Parson said. The disease has so far killed 605 Missourians.

Williams said the state's capacity for testing is "hovering right around 8,000, headed for 9,000" tests per day. He added the projection is to be at approximately 10,000 tests per day in another week or so.

DHSS guidance added, "The testing landscape has shifted significantly in the past eight weeks, and through partnerships with private laboratories, we encourage testing of both symptomatic and asymptomatic individuals."

"People with COVID-19 have had a wide range of symptoms reported - ranging from mild symptoms to severe illness. Clinicians should use their judgment to determine if a patient has signs and symptoms compatible with COVID-19 and whether the patient should be tested," the guidance added.

Other symptoms may include repeated shaking with chills, headache, new loss of taste or smell, chills, sore throat or shortness of breath.

The DHSS guidance also states testing of people without symptoms in situations of local community transmission of COVID-19 should be considered if they are prioritized by health departments or clinicians for reasons including "public health monitoring, sentinel surveillance, or screening of other asymptomatic individuals according to state and local plans."

Williams said sentinel testing - testing among high-risk groups of people - is "the most important" testing strategy of the state, and it includes "long-term care facilities, our jails, our prisons, our meat-packing plants."

"We are issuing an order today that any long-term care facility that has one patient who's positive or one staff member who's positive, that we are recommending comprehensive testing," which means going in and testing everyone there, Williams said - "a capability we didn't have a month ago."

"Going forward, we're going to ask any Missourian to agree to be tested in sentinel testing. We're going to do a lot of that," in an effort to identify the start of any potential outbreak, Williams said.

"That starts today. We will be doing that in a very large way," he added.

He said the state is talking with long-term facilities and meat-packing plants to do periodic testing of all such facilities - not just facilities with confirmed cases - probably through the summer.

Of the 91 homes with an active case in the past two weeks, 41 have completed facility-wide testing, and Parson said work this week will be to get the remaining 50 facilities to complete comprehensive testing.

As for whether every offender and every staff member within the Missouri Department of Corrections would be tested, Parson said that would be up to the department's director.

"We are going to be very, extremely aggressive on testing in the state of Missouri, more than we've seen so far," he said.