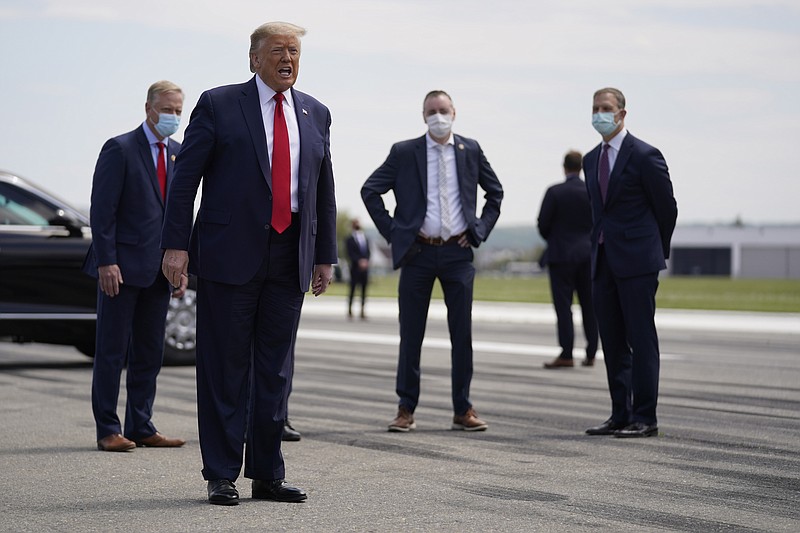 ALLENTOWN, Pa. (AP) - President Donald Trump said Thursday that he intends to prepare for future pandemics by replenishing the national stockpile and bringing manufacturing of critical supplies and equipment back to the U.S. His comments came the same day a whistleblower told Congress the Trump administration had failed to properly prepare for the current pandemic.

"Wouldn't that be nice?" Trump said during a visit to a Pennsylvania distributor of medical equipment. "My goal is to produce everything America needs for ourselves and then export to the world, including medicines."

Trump had complained about supply chains in a television interview that aired before he left Washington for the trip to Owens and Minor Inc. in Allentown.

"These stupid supply chains that are all over the world - we have a supply chain where they're made in all different parts of the world," Trump said in the interview with Fox Business Network. "And one little piece of the world goes bad, and the whole thing is messed up."

"We should have them all in the United States," he said.

In Pennsylvania, Trump added to the pressure Democratic Gov. Tom Wolf is under from home-state Republicans to roll back stay-at-home orders and business shutdowns after effectively containing the state's outbreak early on.

"We have to get your governor of Pennsylvania to start opening things up a bit," Trump said during a speech at the warehouse. Trump claimed some places in the state had been "barely affected."

The president arrived in Allentown on a campaign-like visit to highlight a U.S. medical equipment distributor that is helping make and ship gowns, gloves and other personal protective gear across the country.

Trump did not wear a face covering as he stepped off Air Force One. During the flight, chief of staff Mark Meadows wore a navy blue face mask embossed with the presidential seal in gold. Officials wiped down the handrails on the staircase before Trump arrived.