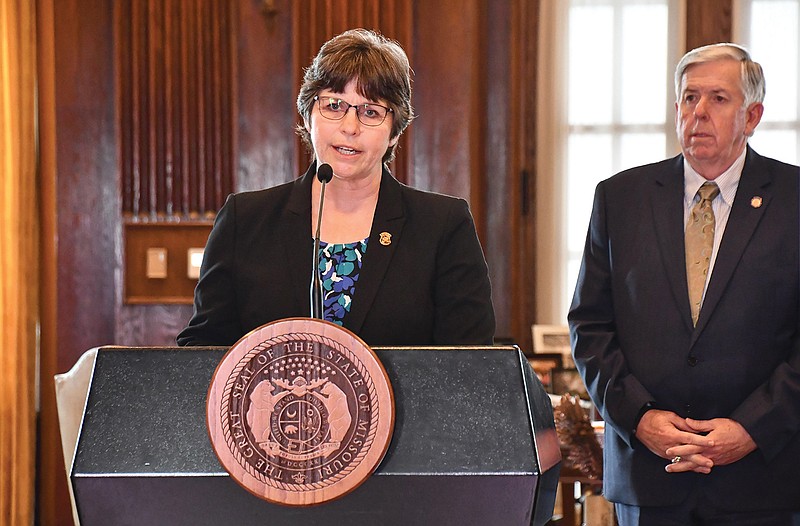 Missourians are living a new normal, but some of the same bad habits from before the COVID-19 pandemic have recently cost more lives on the state's roadways, despite there having been less traffic as people stayed home.

Behaviors will significantly affect how the pandemic plays out and how many people are killed by the coronavirus that causes the disease, but the pandemic is also exacerbating other problems that result from people's behavior, including domestic violence and a decrease in reporting of child abuse.

On the roads, traffic is picking up again after the expiration of the statewide stay-at-home order and the beginning of reopening for the state's economy.

Despite the lull in traffic - down 40 percent across the state and about the same in Jefferson City in early April - deaths statewide from crashes in 2020 are up 6 percent from this time last year, said Sandy Karsten, director of the Missouri Department of Public Safety.

"That should not be happening when traffic on our highways is down from last year, and the reason seems very clear. When roads were empty, some motorists drove 25, 35 or even 45 mph above the posted speed limit," Karsten said.

According to the Missouri Highway Patrol, 263 people have died in vehicle crashes so far this year, compared to 247 this time last year.

Since the start of the year, troopers have seen a 55 percent increase in the number of people driving 26 mph or more over the speed limit, Karsten said.

"That is dangerous, very deadly, as we're seeing, and it cannot continue," she said.

She said the patrol has moved more troopers into marked vehicles for more visible traffic enforcement - including by pulling troopers from their duties with the patrol's gaming division, because casinos are closed.

"We ask that everyone please remember these victims, who may seem unseen to most of us, and (we) would ask that you be proactive in checking on your friends," Karsten said.

Despite the problems it contributes to, social distancing remains one of the few tools available to combat the spread of COVID-19.

The widespread use of cloth face coverings would also help slow the spread of the disease, but Gov. Mike Parson - who has not mandated that people wear them - said people who choose to wear masks should not get a false sense of security from them; social distancing is still the top priority.

Some protection is better than none, but cloth masks do more to help prevent a person who does not know they are infected from spreading the disease to others, by helping to contain virus-bearing droplets they exhale or cough.

"Social distance as much as possible," Parson said.

"This is going to be the new normal, for a while," he added.

Parson would like to develop a 30- to 60-day stockpile of such medical equipment and rely less on outside sources to obtain them.

As of Monday, Karsten said, the state has a 14-day stockpile of PPE, though that's in addition to what first responders and hospitals may already have available in their own stocks.

The state is also to receive approximately 4,000 bottles of remdesivir this morning, said Dr. Randall Williams, director of the Missouri Department of Health and Senior Services.

Remdesivir is a broad spectrum antiviral medication developed by U.S. biopharmaceutical company Gilead Sciences. The drug was originally born from research into hepatitis C and respiratory syncytial virus, but the company began to investigate use of it against emerging diseases in 2014, amid the spread of the Ebola virus in West Africa.

Remdesivir does not yet have approval for use anywhere in the world, according to the company, but while clinical trials are ongoing during the COVID-19 pandemic, the U.S. is among the countries where remdesivir is being made available for compassionate care use for patients with severe cases of COVID-19.

Williams said patients who receive the medication can get it for five days or 10 days, depending on the severity of their case, "but it's been shown to significantly reduce their morbidity."

He said 4,000 bottles is enough for about 600 patients, and the priority will be patients on ventilators: "We don't have a lot (of those patients), but we have some."