One hail of a night: Jefferson City hit with large hail storm 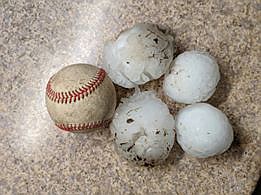 Hail that fell near Capital City High School on Friday night, March 27, 2020, was the size of a baseballs.

The hail started in different areas of the city between 9:30-10:30 p.m., and it typically lasted less than 10 minutes. Pieces were seen up to 3 inches in diameter, according to the National Weather Service, or around baseball size.

Jefferson City area residents took to Facebook late Friday night and Saturday morning, sharing photos of damage to vehicles and homes. Numerous experienced broken windshields and large dents in cars because of the lumps of ice.

Many residents reported the largest hail and heaviest damage on the west side of town, while the east side seemed to have been spared. Holts Summit also received quarter to golf ball-sized hail on average, with some reaching baseball size, resident Michael Rodgers said.

Amber Burnett lives in the West View neighborhood on the far west side of Jefferson City, and she said saw heavy hail around 10:20 p.m.

"It came down hard in the worst hail storm I've ever seen," Burnett said. "Broke out the window of one of our cars and dinged up the other pretty bad."

Renee Walker, who lives just off of Missouri Boulevard on the west side, said the hail started around 10:15 p.m.

"I was upstairs in my apartment when it sounded like something was pelting the roof and back door," Walker said. "I quickly went downstairs and watched with my neighbors as massive pieces of hail hit. I live across from a Break Time, and could see several cars pulling in to try and get under their cover."

Walker said several cars in her neighborhood had dents and cracked windows, and where the hail struck the roof and yard is visible.

Her own car - purchased only three weeks ago - has a broken windshield.

Auto glass repair shops, like Mark's Mobile Glass - which switched to only mobile installations March 17 in response to the spread of the coronavirus - and On Site Glass were busy with calls and requests for quotes Saturday morning.

On Site Glass lowered their prices in response to the high volume of damages and is taking quotes 24/7 through their text line at 573-723-1216.

Kemna Collision repair is usually closed Saturdays, but the business posted Friday night they would be open Saturday to help with hail damage claims.

Body shops saw jumps in business Saturday, too. Several opened specifically for the influx of damage.