Albert Uderzo, a creator of French hero Asterix, dies at 92 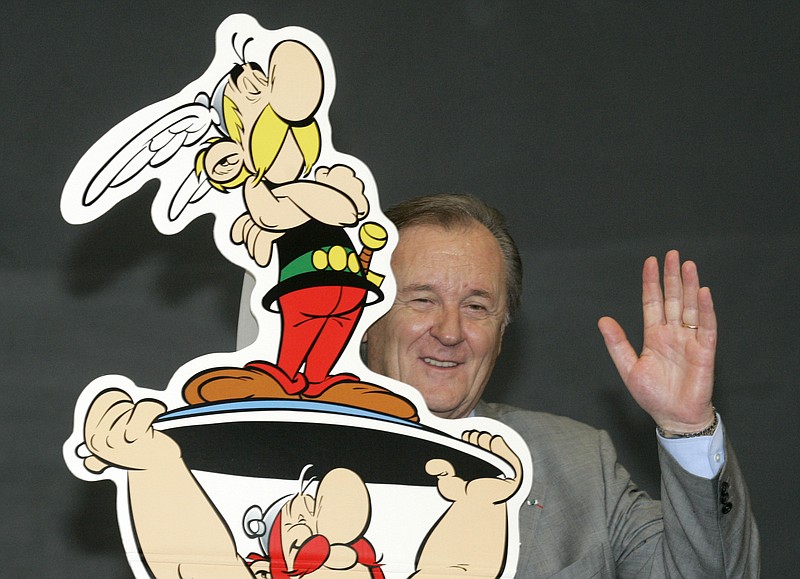 FILE - In this Oct.23, 2005 file photo, French author and illustrator Albert Uderzo waves from behind a cardboard cutout showing his comic heroes Asterix and Obelix at the 57th Frankfurt Book Fair in Frankfurt, Germany. Albert Underzo, one of the two creators of the beloved comic book character Asterix, who captured the spirit of the Gauls of yore and grew a reputation worldwide, died early Tuesday March 24, 2020. He was 92.(AP Photo/Joerg Sarbach, File)

PARIS (AP) - Albert Uderzo, one of the two creators of the beloved comic book character Asterix, who captured the spirit of the Gauls of yore and grew a reputation worldwide, died Tuesday. He was 92.

The French press quoted family members as saying Uderzo died of a heart attack in the Paris suburb of Neuilly.

Asterix, portrayed as a short man with a droopy mustache always wearing a helmet with wings, was created in the early 1960s by Uderzo and Rene Goscinny. The character lived in a village in Gaul, present-day France, resisting Roman conquerors, along with his inseparable big-bellied friend, Obelix.

"Albert Uderzo died in his sleep at his Neuilly home of a heart attack with no links to the coronavirus," the French press quoted his son-in-law, Bernard de Choisy, as saying. "He had been very tired for several weeks."

French Culture Minister Franck Riester said Uderzo "found the magic potion," referring to his spirit, craftsmanship and long hours of work. Riester may also have been making a reference to the famous magic potion in the Asterix series, which gave the hero and his fellow villagers temporary superhuman strength.

"Supreme nobility, he accepted that his heroes survive him for the happiness of the public," Riester said.

Uderzo initially illustrated the characters created along with writer Rene Goscinny. Together, they created 24 comic books. After Goscinny's death in 1977, Uderzo also took over the comic books' writing duties, deciding to continue without his creative partner.

"They were as different as fire and water, but they lived something that few among us could live," she told the French daily Le Parisien. "They were the kind of friends you don't often have in life."

Uderzo, whose father was an Italian immigrant, was born April 25, 1927, in France's Marne region, but he grew up outside Paris. As a child, he was captivated by Walt Disney characters, notably Mickey Mouse, one of the inspiration of his own artistic talents.

After numerous jobs and referrals, he met Goscinny when he was 24. An instant friendship developed, "and we decided to remake the world with all the thoughtlessness and the boldness of our youth," Le Monde quoted Uderzo as saying in his memoirs.

After collaborating on other projects for some nine years, "Asterix Le Gaulois" appeared in 1961.

Fans offered thanks on social media and recollections of childhood memories reading the Asterix comic books whose fan base includes adults.

The Asterix books have been translated into dozens of languages.

Asterix-based spinoffs include movies and a theme park outside Paris that draws tens of thousands of fans of the iconic resistance hero and his mighty sidekick, Obelix.