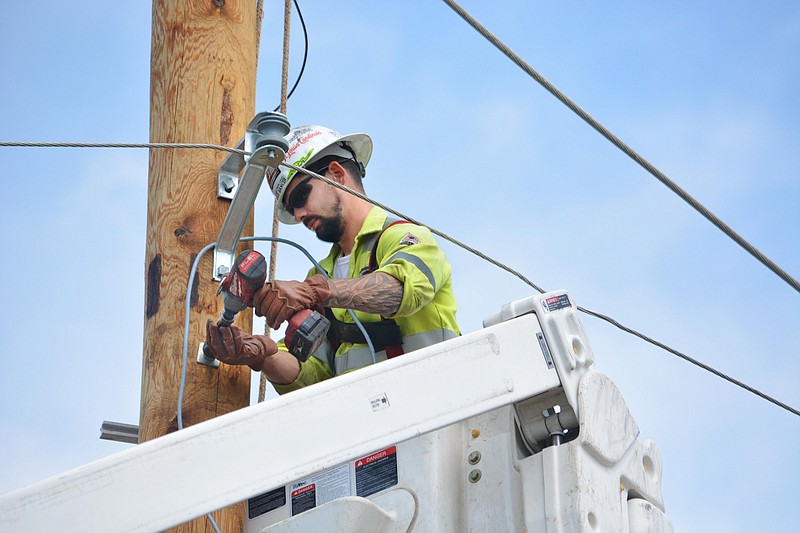 Ameren utility worker Tyler Hudson, of St. Louis, installs an electrical wire Friday, May 24, 2019 as Jefferson City begins to repair damages caused by the May 22 tornado.

When Ameren filed its electric rate case with the PSC on July 3, it sought to reduce electric revenues by approximately $800,000. The agreement approved by the PSC will provide new rate options for customers once they receive an Advanced Metering Infrastructure (AMI) meter. Ameren is scheduled to begin implementation of the new AMIs this summer.

As part of this agreement, Ameren is to inform customers about rate choices once an AMI meter is installed. Ameren is to provide customers a notice of intent to install AMI meters at least 30 days prior to installation, and provide the customer with an opportunity to opt-out of installation. Under the agreement approved by the Commission, a customer is to receive information regarding rate options available to them no later than the date their AMI meter is installed. Within six billing months after a customer receives an AMI meter, Ameren will contact the customer to talk to them on what their bill would have been in prior billing periods under available rate options, and will shift the customer to being billed on the daytime/overnight rate going forward, unless the customer opts for another available rate option. As of Jan. 1, 2021, new customers or new accounts with an AMI meter will be placed directly on the daytime/overnight rate, but those customers will be informed of and have the option to request all other eligible rate options.

Also under this agreement, once a customer receives an AMI meter, they will also have the ability to choose an "EV Savers" or "Smart Savers" Time of Use rate option. In addition, Ameren Missouri is to develop an online neutral rate comparison tool to show a customer their bill under each available rate option based on historical usage information, and will contact residential customers via their preferred communication method on how to access the rate comparison tool.

Under a separate agreement approved by the PSC, Ameren will donate $7 million to the 14 consumer action agencies in the state that administer low-income weatherization assistance programs in its service territory with an additional $500,000 to the consumer action agency headquarters for a total of $7.5 million, to be spent on low-income weatherization or for assistance to low-income customers for such customers' participation in Ameren Missouri's energy efficiency programs. Ameren Missouri will also continue its Income-Eligible Weatherization Assistance Program and the total budget for Keeping Current will be increased from $1.3 million to $2 million.