Governor: People must have plans to overcome COVID-19 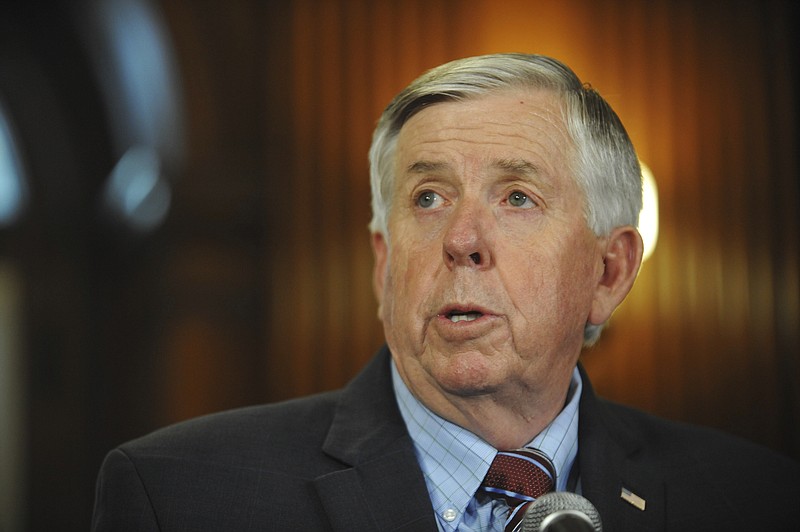 FILE - Missouri Gov. Mike Parson addresses the media during a news conference in his Capitol office in Jefferson City.

As the COVID-19 pandemic worsens and deepens, individuals and families better have plans for getting by day to day, Gov. Mike Parson warned during a press briefing early Wednesday morning.

It is up to Missourians to determine how bad the event gets, he said. They need to practice good hygiene and social distancing.

"If there was ever a time to make sure we are giving people the right information, and encouraging them to do things like social distancing, or how they conduct themselves - and stay at home," Parson said. "Everyone should stay at home. You don't need to be out. That's an important message. It all comes down to personal responsibility."

The government can make all the laws you want it to make, but at the end of the day, he continued, how severely COVID-19 affects Missouri citizens will depend on them and the responsibility they are willing to take on. The situation is going to come down to common sense, he said. People have to understand this is a serious situation that's not going to go away.

The state is going to get through the pandemic, but people will have to make good decisions, he said.

"It doesn't matter if you live under a bridge or if you live in a castle," he said. "Every Missourian is going to get treated with everything that we have on the table."

COVID-19 is novel coronavirus. Coronaviruses make up a large family of viruses. Some cause illnesses in people, while others infect only animals. Rarely, animal coronaviruses have emerged to infect people and can spread between people. This is suspected to have happened for the virus that causes COVID-19. The current virus was first detected in Wuhan City, Hubei Province, China, according to the Centers for Disease Control and Prevention. Early infections were widely linked to live animal markets, but the virus is now spreading from person to person.

Parson spoke during his nightly COVID-19 press briefing. Earlier in the day, he announced the state had its first death from COVID-19, a patient in Columbia who was in their 60s.

The patient is believed to have contracted the disease while traveling.

Data indicates COVID-19 poses a higher risk of death for older patients and for those with compromised immune systems. Younger people are generally not affected as severely unless they have an underlying health issue.

The pandemic is much more widespread than what Missourians have known as "disasters," Parson said. When the state has disasters, they are tornadoes, flooding or fires. They are normally isolated to certain parts of the state.

Every day things happen - things change daily, Parson said. Every day, his cabinet is discussing the challenges their neighbors are facing.

"We're well aware that thousands and thousands of Missourians are going to lose their jobs," Parson said.

The administration is constantly working on what it can do to prepare to help Missourians out, he said. At the same time, they have to help businesses stay afloat when they have fewer and fewer customers.

That's why he signed an executive order earlier in the day to give his departments discretion and authority to waive or suspend statutes or regulations in response to public health and public safety, Parson said.

"It is a wide order. And it's basically designed to let us do anything we can do to help with the coronavirus," he said. "It will deal with all things, such as transportation - how we get products here."

The order expands telemedicine, he said, so it will not have to overcome regulatory burdens.

"We've seen a lot of schools shut down in the state of Missouri," Parson said. "Now the problem is - how do we deal with children in day cares across the state?"

The state is activating disaster loans for small businesses.

"That will happen in the near future," Parson promised. "And, we'll be able to deliver that to small businesses."

A federal stimulus package is going to help, he said.

Concerns about the coronavirus caused Parson to push back local elections for two months, forced the closure of one of the state's most iconic landmarks and led state lawmakers to scramble to make sure the state has enough money to respond.

Parson ordered all local elections scheduled for April 7 to be postponed until June 2. The executive order allows already printed ballots to be used for the rescheduled elections. Residents who turn 18 by April 7 will be allowed to vote.

Twenty-four cases had been confirmed as of Wednesday night in Missouri. One of the new cases involved someone who went to work in St. Louis even while exhibiting symptoms, Mayor Lyda Krewson said on Twitter.

"With this case, there's reason to believe there is community exposure," Krewson said. She urged anyone with cold- or flu-like symptoms to stay home and contact a medical professional.

In a letter to staff and students, Martin wrote both students studied abroad in Denmark and did not return to campus. He said both are in quarantine out of state.

Martin said the two physicians at the School of Medicine are also in quarantine and are not working with patients.

"We're working as diligently and quickly as possible with public health officials who are focused on identifying and communicating with anyone who may have had contact with the physicians," Martin wrote.

Another of the new cases announced Tuesday was a Jackson County man in his 40s who recently traveled abroad. The man is doing well and is in isolation at home, while his family is in self-quarantine, county health officials said.

Children's Mercy hospital announced in a tweet Wednesday a patient treated in the downtown Kansas City hospital's emergency room on Sunday had tested positive for the virus and would be self-quarantined at home.

The vast majority of people recover from the new virus. According to the World Health Organization, people with mild illness recover in about two weeks, while those with more severe illness may take three to six weeks to recover.

The Associated Press contributed to this report.

Print Headline: Governor: People must have plans to overcome COVID-19