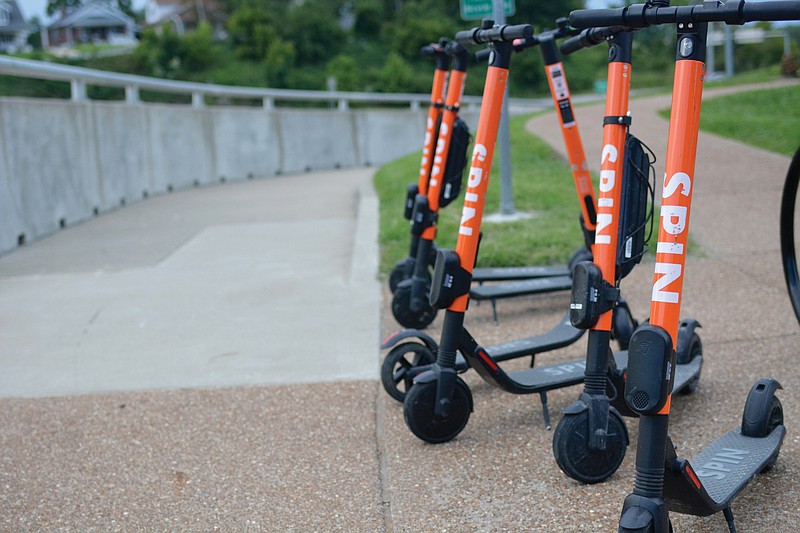 A group of Spin scooters are parked last year along the a pedestrian lane. Due to low ridership, the scooters are not returning this year.

Jefferson City residents keeping their eyes peeled for the return of the bright-orange Spin scooters are out of luck - the rentable rides are not coming back.

Citing low ridership, the company that operated the Spin scooters in Jefferson City said they will not bring the electric scooters back to the city.

Bike-share company Skinny Labs Inc. provided the rentable electric scooters and bicycles residents could unlock and use through a mobile app. Prices were dependent on how long the scooter or bike was used, with a $1 unlock fee. The bikes were introduced in June 2018 and the scooters in December 2018.

In October 2019, Skinny Labs announced it would be removing the bikes entirely because of low usage and degrading conditions, and the scooters would be put away for a winter hibernation, to come back in March.

The contract between the company and the Parks Commission would have either expired or been renewed in May. The company told the department, because of low usage, it would not bring the scooters back this month or renew the contract, Schroeder said.

Department Director Todd Spalding said they will look into finding another scooter provider. Nearby Columbia has scooters provided by a company called Bird.

"It's not over, though. We're going to explore other options," Spalding said. "This isn't just a fun thing. What we're trying to get is people using them for transportation, get some cars off the road, do some different things."

Spalding said the Jefferson City market may not be as big as the markets the companies typically operate in.

"We were trying, they just were really looking at the bigger markets," Spalding said. "They just don't have any markets like our size left, and frankly, not very many of them do."

Spalding and Schroeder said they were not sure what ridership numbers the company was expecting them to reach.

Also at Tuesday's meeting, the Parks Commission approved a $1,086,779 contract with Little Dixie Construction, out of Columbia, for improvements to the indoor pavilion at McClung Park.

As part of the department's Master Plan, the pavilion at McClung Park will be fully renovated, including more windows, new doors and a new floor. Outdoor improvements include clearing brush, parking lot improvements and irrigation.

Improvements to McClung Park, as well as Community Park and Ellis-Porter Riverside Park, will be funded through approximately $7.5 million in special obligation improvement bonds, approved by the Jefferson City Council in November 2019.