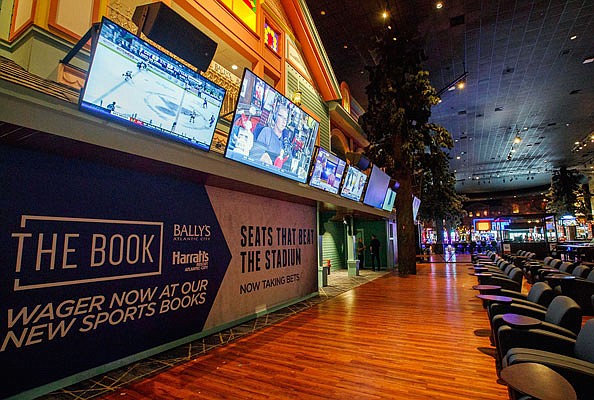 A Missouri House of Representatives committee cleared the way Tuesday for two plans to legalize sports betting to be heard on the House floor, where legislators will get the chance to iron out their remaining wrinkles.

Proposed by state Reps. Cody Smith, R-Carthage, and Phil Christofanelli, R-St. Peters, the two bills would set up similar regulations for sports betting, both online and in casinos.

The committee voted unanimously to pass Smith's bill after voting down three amendments, and voted 8-1 to pass Christofanelli's, with state Rep. Peter Merideth, D-St. Louis, voting against it.

State Rep. Jon Carpenter, D-Kansas City, said he supported both because he wants to get sports betting set up this year.

"I'm not 100 percent sold on either of these bills as of today, but I do think it would be good to get this done this year," he said.

Two key differences are that Smith's would require sports books to use official league data to score bets, except for prop bets, and has a higher tax rate and annual fees than Christofanelli's. In a hearing last week, sports leagues preferred Smith's bill, while the casino industry pushed for Christofanelli's.

Meredith proposed raising the tax on Smith's bill from 9 to 15 percent, which he said would be more in line with other states. The average rate for states where sports betting is already legal is just under 20 percent, Merideth said, citing the National Conference on State Legislatures.

The committee rejected Merideth's amendment, and Carpenter offered a compromise at 12 percent, which was also rejected. Merideth questioned why the sports betting rate would be set lower than the state's 21 percent gambling tax.

State Rep. Dirk Deaton, R-Noel, argued that because there is already a strong black market for sports betting, and if the tax rate is too high, people won't switch over to the legal system.

In both bills, the tax would be applied to adjusted gross revenue, so the books would pay it, not the bettor.

Meredith also proposed adding a referendum clause to Smith's bill so voters would decide whether the state legalizes sports betting. Every expansion of gambling, small and large, has been sent to the voters, Merideth argued.

"A step like this that takes the one type of gambling that is completely illegal - not only make it legal, but then make it more accessible than any other type of gambling - is something we ought to send to the voters," Merideth said.

The committee rejected the referendum clause.

Deaton argued that while sports betting is illegal, it's already widespread in Missouri. When Merideth raised the idea of a referendum clause to Christofanelli last week, Christofanelli said it would be unnecessary because the Legislature is elected to enact the will of the people.

While the tax rates and process are issues to some lawmakers, industry groups largely focused on whether the sports betting system would require books to use official league data. Last week, sports leagues argued it ensured the accuracy of the results, while the casino industry argued it was a cash grab by the leagues and that other companies provide accurate data.

State Rep. J. Eggleston, R-Maysville, floated the idea of requiring the books to use league data but not allowing the leagues to charge for it. It would ensure accuracy like the leagues argued, while not giving them more money for something "they're being naturally enriched from," he said. Eggleston didn't propose an amendment but said he may during the floor debate later.