Some states make it harder for college students to vote 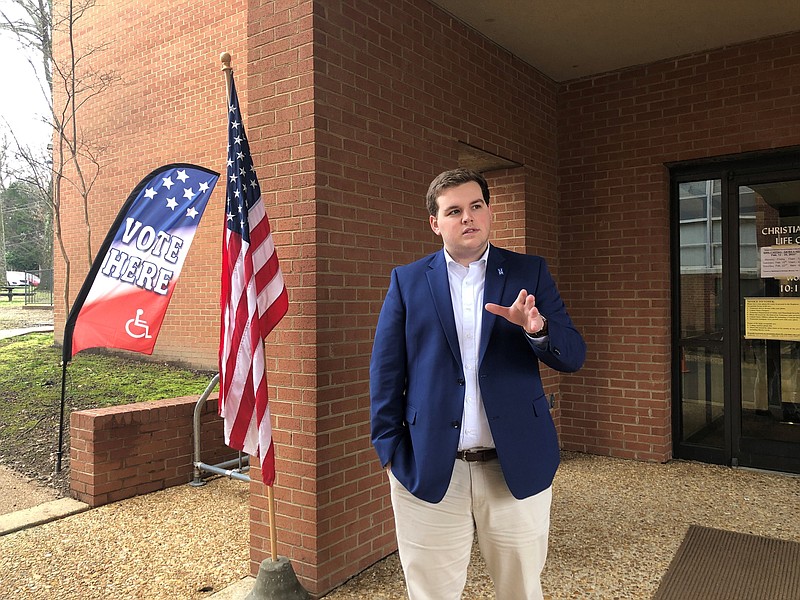 University of Memphis student Landon Shelby speaks with a reporter outside an off-campus voting location on Tuesday, Feb. 25, 2020, in Memphis, Tenn. Shelby, a Republican, said he would like to see the university have a polling location on campus to help students cast ballots more easily. (AP Photo/Adrian Sainz)

MEMPHIS, Tenn. (AP) - Vanderbilt University student Will Newell wishes it was easier for college students like him to cast ballots in Tennessee, one of 14 states holding a presidential primary on Super Tuesday.

The campus has no locations for early voting, so students must visit an off-campus polling location to cast a ballot on Election Day. Newell drives but worries many students who don't have their own transportation won't make it to a precinct. He said some campus groups offer rides to students, but the university itself does not provide a shuttle.

He supports a bill introduced in the Tennessee Legislature that would require early voting locations at large colleges and universities in the state. That's not the only restriction working against college students in the state. Tennessee, where overall voter turnout is low, is among several states that does not allow a college student ID.

"It just makes the last part of actually getting them to the polls to vote a lot more difficult," Newell, a senior public policy and economics major, said of the ballot-casting hurdles faced by students in the state.

As Democratic candidates seek a boost from young voters in 2020, their impact at the polls could be blunted in a number of states that make voting more difficult for college students. Those include laws related to voter IDs, residency requirements and on-campus polling places. Critics said many of those laws are designed to dampen turnout among voters who typically lean Democratic.

College groups aligned with the Democratic Party are mobilizing this year in an effort to defeat President Donald Trump's re-election, said Matt Nowling, national director of communications for the College Democrats of America.

"Republicans see that and they're scared," said Nowling, a junior at Denison University in Granville, Ohio. "College Democrats have been at the forefront of fighting against these issues."

Their efforts face obstacles, however.

Democrats said Republican-controlled legislatures in some states are actively trying to keep college students away from the polls. Some laws have been challenged in court, such as in New Hampshire, where a law essentially makes out-of-state college students subject to residency requirements like obtaining a state driver's license or registering their vehicles.

In Texas, Democrats have sued over a law requiring early voting locations to be open for the entire early voting period of 12 days. The law is geared to stopping "rolling polling," which allowed local governments to use temporary mobile voting sites at college campuses, nursing homes and other locations.

"You had the bad actors go out there and use mobile voting locations to target particular voters," said James Quintero, director of the foundation's Center for Local Governance.

Quintero said the new law allows polling places to be open on campuses for all 12 days of early voting. However, Democrats have pointed to the timing of the law, which was passed months after a dramatic spike in voter turnout in 2018.

"It was very clear they were trying to stop college student voting," Maxey said.

Texas and Tennessee are among seven states where college identification cards are not allowed at polling places, with laws enacted by Republican-controlled legislatures from 2008-18. The others are Arizona, Iowa, North Dakota, Ohio and South Carolina - all are states won by Donald Trump in 2016.

A law proposed by a Republican lawmaker in Arizona would prohibit students using college dormitory addresses in voter registration. The state already keeps student IDs off its list of approved voter identification. A bill proposed in the Arizona House would explicitly prohibit the use of college or university IDs at polling places.

The Campus Vote Project was launched in 2012 by the Fair Elections Center, a non-partisan voting rights group, and has been working to increase interest in voting among college students.

Print Headline: Some states make it harder for college students to vote