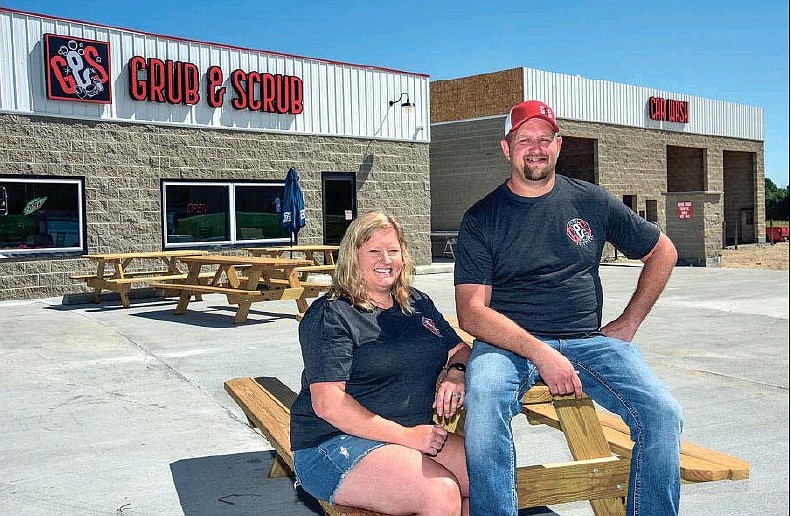 Shawn and Amanda Dworaczyk, owners of the newly-constructed Grub and Scrub in Eugene, pose in front of the business that opened Saturday, June 27, 2020.

When Shawn and Amanda Dworaczyk attended Eugene High School, students congregated at a local gas station after school. Current students don't have a gathering area, though - something the couple hopes to fix with their new restaurant and car wash.

The Dworaczyks opened Grub and Scrub, at 14228 Mt. Carmel Road in Eugene, on Saturday.

After having to push off their original opening date in April, the couple said they are excited to provide a resource to the community.

"This is just a cool place for kids to come hang out after they get out of school and before they go to work or home or whatever it is they need to do," Shawn said.

The drive-thru will also be an asset to the community, Shawn said, particularly since it can accommodate six or seven cars.

Many customers may feel more comfortable going through the drive-thru because of the coronavirus pandemic, Amanda added.

Originally the menu was going to contain 10-20 food items, Shawn said, but his excitement to cook for the community pushed him to expand it.

There are some items Shawn wants to add to the menu, but for now they will be daily specials.

The Dworaczyks enjoy visiting New Orleans for the food, which is one of the reasons they decided to offer Cajun food in Mid-Missouri.

When it comes to the Cajun food, the Dworaczyks said, they want customers to have an authentic experience. For example, the couple will import filleted alligator from Louisiana to use in their gator bites.

"A lot of people go to Columbia or Jefferson City or the Lake to get Cajun food, and it's just not the same - or at least I don't think it's the same," Shawn said. "(At Grub and Scrub), it's all homemade and all going to be fresh, and it's got a totally different taste."

As the name suggests, the business also features a 24-hour car wash next to the restaurant.

It has four bays - one automatic bay, two covered manual bays and one outdoor manual bay.

Customers will be able use an app, credit card or cash to pay for washes.

After the previous car wash in Eugene closed, the Dworaczyks said, the closest ones were in Jefferson City and Eldon. Located off U.S. 54, the car wash will address a community need and attract highway traffic, they added.

While the restaurant is now open, the car wash won't be ready for another four to six weeks, Shawn said.