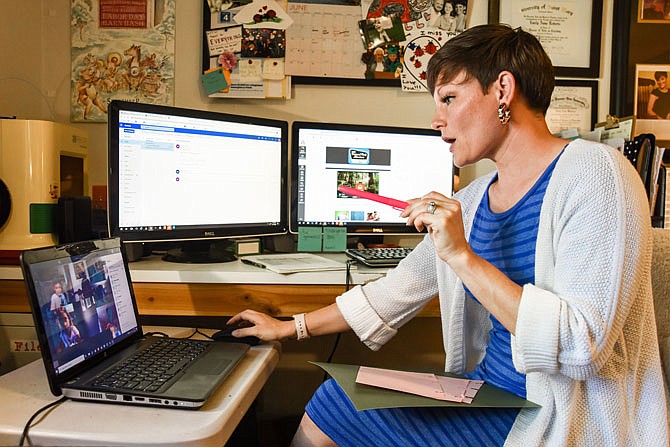 Belair Elementary School teacher Emily Roberts delivers an online art lesson as part of summer school classes. She has converted a craft room into her office from which she contacts her students and fellow teacher.

Craft supplies, artwork and toys have an important place this summer in teacher Emily Roberts' home office in Centertown - and she's picked up an office mate.

On Thursday, the Jefferson City School District teacher cut shapes out of green and pink construction paper and glued them together to make lily pads with pink flowers. As she did so, she explained the steps and encouraged her second-grade summer school students through a video chat as they followed along.

Roberts' fifth-grade daughter, Ava, sat next to her and completed her own summer school activities on her Chromebook.

Summer school this year began June 3, and it will end June 30. JC Schools is using Launch, a virtual learning program based in Springfield Public Schools that partners with school districts statewide to offer students access to the program.

All Launch partner districts are charged a one-time joining fee based on K-12 size, according to the Launch website. JC Schools paid $300 per course. As of May 20, students were enrolled in 2,485 courses at a total expense of $745,500, JC Schools Communications Director Ryan Burns said. There has been some fluctuation in enrollment, so the amount could change.

The courses are aligned to Missouri Learning Standards and created by Springfield Public Schools curriculum specialists, teachers and digital developers.

For teachers, students and parents, it's a whole new experience.

Roberts' students smiled and proudly showed off their completed lily pads, a project tied to the elementary summer school "national park adventure" themed curriculum. This week's national park was the Everglades, so Roberts screen-shared a video of lily pads and crocodiles at the Everglades for her students to view before they created their own lily pads.

Launch's elementary school curriculum includes several reading, writing, math, art and P.E. activities each day from which students can choose. Other subjects, such as science and social studies, are built within these subjects.

The students can watch videos and read virtual books about national parks and wildlife, and then complete activities that complement what they learned, such as wildlife-themed matching games or vocabulary assignments. The art activities include craft tutorials tied to the curriculum, and the P.E. activities include video tutorials such as yoga and dance while teaching students about health and science.

Students can complete the assignments at any time, allowing them to work at their own pace. The Department of Elementary and Secondary Education requires that six hours worth of assignments are offered to students. However, students do not have a time requirement. Roberts' daughter and her students typically spend about two or three hours on schoolwork each day, she said.

Teachers are required to be available for at least three hours a day to answer parents' and students' questions. Roberts said she typically works from 8:30 a.m.-3:30 p.m. with breaks in between.

Roberts holds a virtual class meeting every day where they do crafts or take turns sharing something, such as the crafts they made before the meeting or which animal from the national park was their favorite.

She has 25 students in her class, but only about eight show up to the meetings. Some of the students' parents work all day, so the students complete their work in the evening. Roberts has talked to other teachers - elementary, middle and high school - who said this is the case for their classes, too.

Six of Roberts' students have not logged in at all - mostly students whose parents work full time outside of the home, she said. One of the parents has not responded, and the others said they've been busy.

Roberts' class is made up of students in four schools in the Jefferson City School District. Launch tries to put students and teachers in the same district together, but some students in other classes have teachers and classmates in different districts.

Although Launch is easier to navigate than the virtual learning programs they were using during the spring, it took some time for parents and children to get used to the switch, Roberts said.

While they're not in Roberts' class, one Jefferson City parent and her children have experienced several challenges.

Jessica Green's second-grade daughter, Londyn, was accidentally registered to two teachers' classes, and assignments haven't shown up for her, Green said. She's been completing assignments on iReady instead, a program the district used during the spring semester that is available to students through June 30.

There have been some general difficulties with the program: Springfield Public Schools didn't send paper workbooks needed to complete some of the assignments until about a week after summer school started, and the log-in information, which includes the website, user-name and password, went to almost everybody's junk email folder, causing many families to not see it.

Green didn't see the log-in information until the night of the first day of summer school, so her children missed out on the first day.

"I think there wasn't a chance maybe for things to be tested to make sure they were working correctly prior to actually launching the summer school," Green said.

Things began to run more smoothly once they were able to video chat with their teachers and classmates.

"It was nice to be able to see a couple of other classmates, and the teachers are really good about communicating with you via text, email or just by phone in general - they are very much available to offer their assistance when they can," Green said.

iReady is more challenging than Launch, Green said, because the questions are based on each student's individual skill level. While the Launch curriculum is fun, she said she hopes it'll get more challenging.

"The national park theme is great, but I don't really know if she's actually learning or if it's more of just kind of here for a little bit of fun," she said.

Green's children have been independent with their work for summer school and during the spring semester. On Thursday, Green helped them log in, and they sat at their coffee table, practicing basic math and watching a video about Yellowstone National Park, eyes glued to their screens. Green worked from home alongside them, listening to a conference call in her pajamas.

During the spring semester, Green's children were completing paper packets and iReady lessons. Since online learning is more stimulating and interactive, her children prefer it to the paper packets.

"The Launch program gets them more into the technical side of things and gets them used to utilizing technology for their learning," she said. "They prefer to be using the Launch program because it's computer-based. When they do the packets, my kids get kind of bored."

The first couple days of summer school, parents and students had trouble learning how to use the program, so Roberts used Launch's screen-sharing option to teach them. Now, students can easily navigate the program themselves without help.

"I have some parents send me pictures of the kids laying in their bed at night with their Chromebooks, working away, and they're like, 'We just never thought we'd see them do this and here they are loving it and working through it. We don't have to help them.'"

The screen-sharing option also makes it easier to teach students than the programs used during the spring semester, Roberts said.

During the spring semester, teachers and students were using multiple separate platforms such as Google Meet, Google Classroom and iReady. With Launch, the courses are built in a learning management system called Canvas where each app is built into the program, making it easier to navigate.

"Canvas is just a really wonderful learning management system that's kind of set up for success for students," she said. "Everything is kind of utilized through this one educational platform, and it just makes it so easy for students to understand, and they know exactly what to do."

Ava hasn't needed any help using Launch - a different experience from the spring semester, where she asked Roberts many questions about how to use the programs.

"She's just really loving it," Roberts said. "She's engaging with her class, and she really likes the work. It's very fun and exciting."

Roberts, who has a specialist degree in online education and develops online courses for Lincoln University, said she believes the closure during the spring semester made many school districts realize they needed a better online learning method like Launch.

"We thought we had something good going with all the Google things we use, but you don't realize until you're forced to realize that you're not prepared to support students online - and who knows what the fall is going to look like?" she said. "We need to make sure we are able to support students and parents online way better than we did during the closure."