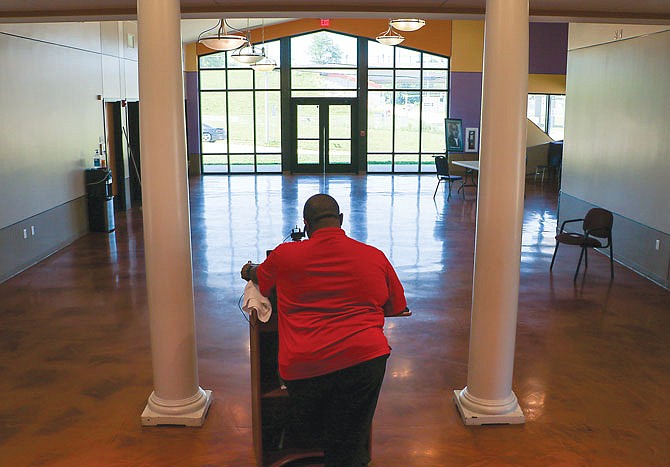 Anthony McPherson, the pastor at Quinn Chapel A.M.E. Church, holds the church's first virtual service Saturday. McPherson drove from his St. Louis home to surprise the congregation by hosting the Zoom service from the church itself.

Some believe George Floyd's death is a call to action - the catalyst that will lead to changes in U.S. race relations.

Floyd, a black Minneapolis man, died May 25 in police custody while a white officer pressed his knee into his neck while Floyd pleaded for air. Protests over police brutality and issues of structural racism have followed his death across the United States and the world.

It certainly has gotten young people involved in the movement to end systemic violence against black people.

Area church leaders are using the moment to warn against racism and to assemble the Jefferson City community under a common cause - the elimination of racism.

Racism is a sin that should have been addressed years ago, according to the Rev. Cornell Sudduth of Second Baptist Church. Sudduth said when a Ferguson police officer shot and killed Michael Brown on Aug. 9, 2014, he thought that might be the watershed event that brought about systemic change.

There is a list of individuals, he said, who have died at the hands of police officers - in New York, where Eric Garner died in a police officer's chokehold after his arrest on suspicion of selling cigarettes without tax stamps; the no-knock warrant that led a Louisville, Kentucky, police officer to shoot and kill Breonna Taylor, and countless others.

"There are just so many others," Sudduth said. "This was just a tipping point."

Change, particularly involving racism, is going to come at its own pace, which will vary from region to region. Hopefully, peaceful marches will continue, he said.

The problem is that it's going go be difficult to enact change for the entire United States, he said.

Strong national leadership is necessary, he continued, from someone who is working toward unity instead of division.

"Evil is always going to be present. We're finding out the real deal as it relates to our race," said Sudduth, who is black.

"I have already, in my messages, addressed these kinds of things and spoken to them," Sudduth said. "That is what a prophet is supposed to do - be ahead of the game."

What is different right now is white people are stepping up and saying, "This is not right," he said.

"The George Floyd situation accentuates how far we are behind," Sudduth said. "Thanks be to God that someone was recording what was happening with George Floyd."

In March 2018, about a month after his ordination, Bishop W. Shawn McKnight, of the Catholic Diocese of Jefferson City, joined a movement in the Roman Catholic Church and asked his priests to preach against racism.

As other crises came along, the urgency of his message was muted. But the message about racism is louder this weekend - and maybe more urgent.

"Words are necessary - you have to have statements," McKnight said.

But that's only a beginning, he said.

"This tragedy tears open a wound in Missouri that hasn't completely healed following the death of Michael Brown. It also once again opens up our state and nation to unnecessary violence and destruction," the bishops said.

The bishops denounced police brutality, especially that motivated by racism. And they denounced the violent response.

"We must find a way to live peacefully together, respecting the racial and ethnic differences among us," the bishops said. "Racial and ethnic injustice continues to exist in our state and in our country, and we cannot turn a blind eye to it."

The circumstances bring up a question about what systemic changes are necessary to address racism.

People cannot eradicate their internal racism on their own but need assistance from a higher power, the bishops said.

"This weekend, we ask the Catholic pastors throughout the province of Missouri to include in their petitions at Mass, a prayer for racial harmony and an end to violence," the bishops said.

The prayer asks for forgiveness for our failures to love and respect each other. It asks for the grace necessary to build a just society. It asks for help replacing prejudice and animosity with love that respects every person's dignity.

A pastoral plan the Jefferson City diocese is in the process of adopting calls on Catholic churches to become refuges of mercy and charity.

"I'm more interested in actions. What are we going to do?" McKnight said. "There are several policy issues we're going to focus on in the Catholic Conference."

The conference will look at the issues of abortion and the death penalty, which both disproportionately affect black communities, he said.

"We're going to support expansion of Medicaid. We continue our support of justice reform," he said.

During this weekend's Masses, the Catholic Church celebrates God saving people from their own evil and sinfulness so they may have an abundant life with him, McKnight said.

"I will be inviting our diocesan family to reflect more on the reality of racism, how it can be hidden to us who are white and don't see it," McKnight said. "Racism is a sin. It's a rejection of the gospels of Jesus Christ."

It has to be addressed, he said.

The Rev. Beau Underwood, of First Christian Church Disciples of Christ, sent out a message to his congregation last week. Underwood shared a story from his college days, in which he described two visits to Walmart, one alone and the other with three of his college colleagues, all who were black. During the first visit, he went in shopped and left with the items he needed. During the second visit, while with his friends about a week later, they went in and shopped, but store associates followed them throughout the store, Underwood said.

Later, he asked his friends about the experience.

That happens to them every day, the other students said.

Following Floyd's death, Underwood has reflected on his college experience, he said.

"Reflecting the inequalities of our broader society, the city of Minneapolis has struggled with entrenched racial inequality that is seen in income disparities, unemployment and poverty levels, homeownership levels, educational achievement and many other socioeconomic indicators," Underwood wrote. "Those racial disparities also infuse our criminal justice system. There is a tremendous amount of social science demonstrating that citizens encounter and experience this system in dramatically different ways based on the color of their skin."

Floyd ministered to young men in Houston before he moved to Minneapolis, Underwood wrote, and was a fellow citizen and a "brother in Christ."

Underwood called on his congregation to educate themselves about race in the United States. He asked that members put themselves in places where they experience different cultures. He asked that they reach out to law enforcement organizations to discuss their jobs and how they approach situations.

And he asked them to contact their government leaders to find out how they feel about issues and what they want society to look like.

"What we cannot do is ignore the problem and let it continue to fester," Underwood wrote. "Like any disease, racism threatens to consume us unless we address it."

There is work to be done within our souls, he said.

The Rev. Anthony McPherson of Quinn Chapel A.M.E. Church was to broadcast his message to his congregation late Saturday morning. Like many churches, Quinn Chapel, made up of a large number of elderly people who are most susceptible to serious symptoms of the novel coronavirus that causes COVID-19, has not resumed meeting in person.

"My message throughout this pandemic - and even with last weekend - is just encouraging people to be calm," McPherson said, "and to hold onto their faith and hope that things will get better. It does take us working together positively. Do so in a loving manner."

Alongside the need to wear face masks, the requirements to maintain social distancing and the importance of quarantining when asked, we see protests and looting, he said.

"The world is hurting," McPherson continued. "Hold onto hope. Maintain the love and care for one another."

Both catalysts were involved in the civil rights movement. While the movement brought about change, there's still work to be done, he said.

People want things to happen quickly, but there's always a process as change happens, he said.

"Just hold on and take a moment and be at ease," he said. "It won't be like this forever. Things will turn around. Things will get better."