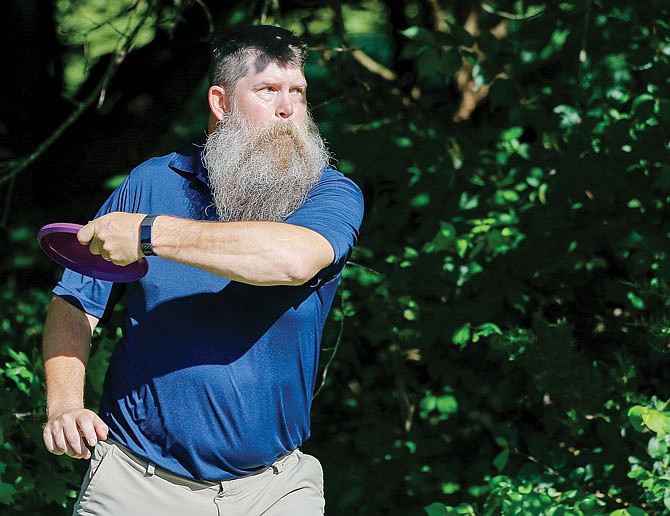 Eric Weddle winds up for a throw Saturday while practicing before the Jefferson City Disc Golf Membership Tournament at the Joseph C. Miller Disc Golf Course in Apache Flats.

It's a sport played in all types of weather, and participants believe it's an example of outdoor recreation that can be done while social distancing during the COVID-19 pandemic.

On Saturday, the Jefferson City Disc Golf Club held its annual tournament at the Joseph C. Miller Golf Course at Binder Park. The tournament, normally held in April, was rescheduled this year because of COVID-19. There were 46 players who participated in the 18-basket event.

"It's just plain fun," Neff said. "The equipment is affordable and it's a great way to exercise that anybody can enjoy."

Kellen Hollis, of Jefferson City, has been playing since he was 12.

"I just turned 39, and I still find it relaxing and fun," Hollis said. "It's a good place to meet good people. Everyone is pretty much on the same level of chillness."

During Saturday's tournament, there could only be four people in each playing group, and they could not touch other players' discs that went into the baskets.

"These precautions did affect us some because, as a courtesy, many times we'll help collecting other people's discs or we want to give someone a high-five for a good shot," Hollis said. "You have to catch yourself in the moment because it's like real golf. When someone hits an amazing shot, you want to congratulate them so you just have to remember to do that from a distance."

Nathan Gary, of Jefferson City, said the competitive aspect of the sport was what keeps him wanting to play.

"If you play with players who are a little bit better than you, obviously it pushes you to do a little bit better," Gary said. "Like Kellen said, the amount of chill we have among the players is great. People are really supportive of each other."

The club has two 18-basket courses at Binder and a nine-basket course at County Park Lake behind the Jaycees Fairgrounds. There's also a course in Holts Summit, which was closed for a while but has reopened.

The game shares many similarities to golf. Players use different discs for different purposes. Some fly farther, while some are more stable for up-close accuracy. A throw off the tee pad is a "drive," and close-up tosses are "putts." A hole in one is called an "ace" in disc golf.

If someone were to play a regular 18-basket course, players said it would probably take about two hours to complete the game.

"Most of our regulars are from Jefferson City, but some come down from Columbia," Neff said. "Many times, we're getting together to raise funds for charity. We have our Ice Bowl tournament in February, which is our annual fundraiser to benefit the Samaritan Center with food and money donations. This year, we raised over $4,000 and brought in 196 pounds of food. Our 12-year total is over $40,000.

"We hope more people come out and enjoy this sport," Neff added. "Once you get a disc in your hand and it does what you want it to do, it feels pretty cool."

For more information about the Jefferson City Disc Golf Club, visit their Facebook page or jeffcitydiscgolf.com.