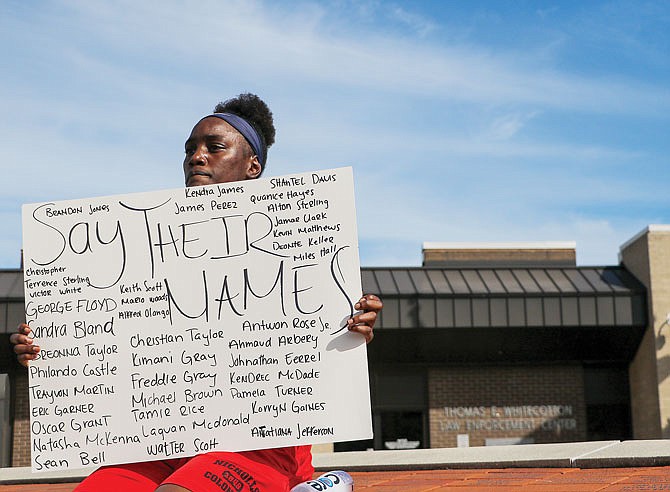 Brenisha Coleman sits Friday in front of the Jefferson City Police Department with a sign that she made, listing the names of black people who died in police custody or killed by police, ex-police or armed white people in recent years. She said she tried to fill in as many as she could, but she ran out of room.

As the evening rush drove by, Hans Overton stood at the corner of Monroe and East McCarty streets with a megaphone and a message.

"You've gotta be strong, and you've gotta be courageous," Overton said. "That's why I'm out here right now - to make some noise. To let the Jefferson City Police Department know that we're here."

Overton was part of a small group gathered in front of the Jefferson City Police Department on Friday evening for a peaceful protest in support of the Black Lives Matter movement as other protests took place across the world, spurred by the death of George Floyd.

Floyd, a black man, died while in police custody as an officer knelt on his neck. The incident took place May 25 in Minneapolis and was captured on video. Since that day, protests have occurred across the nation and the world, using Floyd's death as an example to protest police brutality and racial inequality.

While the group was outside the station for two hours, no police presence was seen. The Jefferson City Police Department also declined to comment on the event.

Overton made a reference to Article 1 Section 2 of the United States Constitution, which declared slaves as three-fifths of a person for purposes of population counts.

"I'm going to let you know today - I'm whole," Overton said. "I'm not a quarter. I'm not a third. I'm not a half. I'm a whole. That's what we want the Jeff City PD to know. We're a whole person, and we're a whole people, so you've got to respect my rights."

As he continued speaking, a small group gathered with him. As a woman jogged by, she held up a single fist, giving her support to the group. Cars honked horns.

Brenisha Coleman wrote the names of black people who have been killed by police or while in police custody, surrounding the words "Say their names." Another sign reading "8 minutes and 46 seconds of silence" was taped to the JCPD sign, a reference to the amount of time the officer knelt on George Floyd's neck before he died.

Resident Mary Major stood with the group, but she didn't originally intend to.

"I wasn't coming to stand out because of the effect of it all," Major said. "But I did decide to get out of my car after I sat there and cried for a while across the street."

Major said she feels there needs to be more attention paid to mental health when it comes to interactions with police officers, and in general, as one possible solution.

"I feel like it should be talked about more - whether it be the police that did this to George Floyd or in your own household - mental illness is real out here, and it needs to be talked about more," she said. "If you get pulled over, let them know you have something going on with you."

Major said she has called the police to explain her own son's mental health issues.

"He will run from the police. He'll take off and he will not stop," Major said. "But it's his mental illness that has caused him to do this."

She also said she hoped people would continue to protest and seek solutions after the initial surge might wear off.

"How long is it going to last? Don't let it be just these couple of weeks that everybody's getting attention because this happened and then once he's laid to rest, let this be laid to rest," Major said. "Let it be a continuous process. If it's really bothering you, let it be just like the air that you breathe. Wake up and breathe it. Wake up and think about it."

Major's daughter-in-law, Dorothy Stevenson, stood along the side of McCarty Street with a white piece of poster board reading "I can breathe so I won't be silent."

As Floyd died, he repeatedly said "I can't breathe." During Friday's demonstration, and many others, participants have chanted the phrase.

Stevenson said she felt Floyd's death brought people of all races together to make a change, and she was encouraged by the media attention to the protests.

"I think we are actually going to move forward," Stevenson said. "I don't know how far we're going to go with it, but to see (the media) here, it speaks volumes to where we're moving."

She said she also attended rallies after the 2014 fatal shooting of Michael Brown in Ferguson by an officer.

"This was something that moved me at a different level," Stevenson said.

In response to the phrase "All Lives Matter," which is used as a counter to "Black Lives Matter," Stevenson shared an observation she had made from attending events for cancer survivors like herself.

"I don't see people at the cancer events saying 'All illnesses matter,' because they know what they're there for at that time," Stevenson. "It's not to discredit any other life. But what we're here for at the moment is black lives."

At one point, Overton handed his megaphone to others who had gathered. Earnette Smith took it for a few moments to share this message:

The others standing around cheered following his words and clapped.

After speaking for over an hour, with the early evening sun beating down on his back, Overton put down the megaphone.

He covered his mouth with a piece of black tape, and sat on the top of a cooler of ice water.

The small group gathered in a line, holding hands with strangers and friends. Stevenson and a few others took a knee in the grass.

And for 8 minutes and 46 seconds, there was silence.