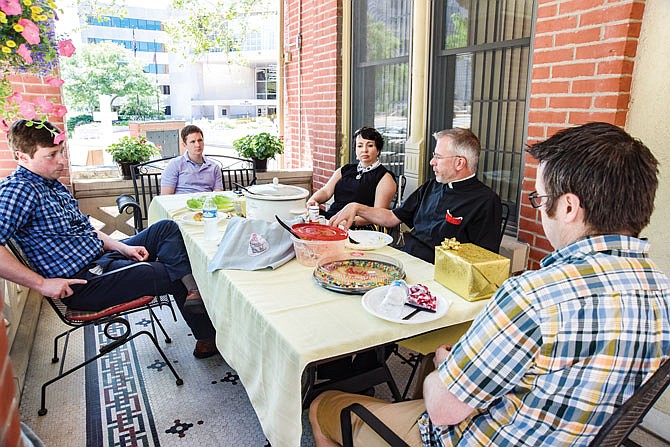 In an ongoing effort to continue open dialogue between churches of different disciplines, pastors of five different downtown churches had lunch Thursday on the porch of St. Peter Rectory. Fr. Jeremy Secrist, of St. Peter Catholic Church, second from right, hosted the lunch. He was joined, clockwise from right, by pastors Ian Lasch, of Grace Episcopal Church; Trevor Dancer, of First United Methodist Church; Beau Underwood, of First Christian Church; and Angela Madden, of First Presbyterian Church. This has been an ongoing conversation but the foremost topic of discussion was race relations as relating to recent protests over the death of George Floyd at the hand of a Minneapolis police officer.

Faith leaders from a number of downtown Jefferson City churches meet regularly to foster friendly ecumenical relations between themselves.

Having had little contact for several months because of the pull of responsibilities and for COVID-19 concerns, five gathered for lunch Thursday on the St. Peter Catholic Church rectory porch.

This gathering was a little different than some: It was intended to offer well wishes to the Rev. Ian Lasch, of Grace Episcopal Church, who will be leaving for a new assignment in Savannah, Georgia, soon.

However, like many conversations this week, talk turned toward justice, racism, sin, tolerance and empathy.

It began with the deaths of George Floyd and others.

The violence that followed.

Like many of us, the issues weigh on these religious leaders.

If not for social-distancing concerns and efforts to prevent the spread of COVID-19, there might be more dialogue and less societal tension, the Rev. Angela Madden, of First Presbyterian Church, said.

A problem is the only people who are going to attend a dialogue are the people who are like-minded, the Rev. Trevor Dancer, of First United Methodist Church. said.

Dancer said he spoke to a friend from high school last weekend. The woman left him "flabbergasted" with her opinions.

"The bottom line is - a whole lot of white people don't believe black people," Dancer said. "They just don't believe that their experience in America is different than (blacks)."

And, if they do believe it, it's because of some actions by black people, Dancer said.

White people don't know what it's like to live with those pressures every moment of every day, he continued.

And it makes people uncomfortable, he said.

"As white people and white leaders we have to use our voice and our platform to foster conversation - and constructive conversation - so the real stories and the real narrative has a shot at being told," Dancer said. "And then we have to work with people to make change."

Somehow, religious leaders have to foster conversations between people who think radically different from one another, he said.

It is the responsibility of church leaders, said the Rev. Beau Underwood, of First Christian Church, to help people see perspectives other than their own.

"In our society, there are not a lot of places where people interact across boundaries," Underwood said. "Our society is sorted in such a way that you don't interact with people who are different than you very often. Church is one of those places where you do to some degree. It creates that opportunity and responsibility for churches to be that place where conversations happen."