Missouri Gov. Parson on civil unrest: 'We're going to put an end to it' 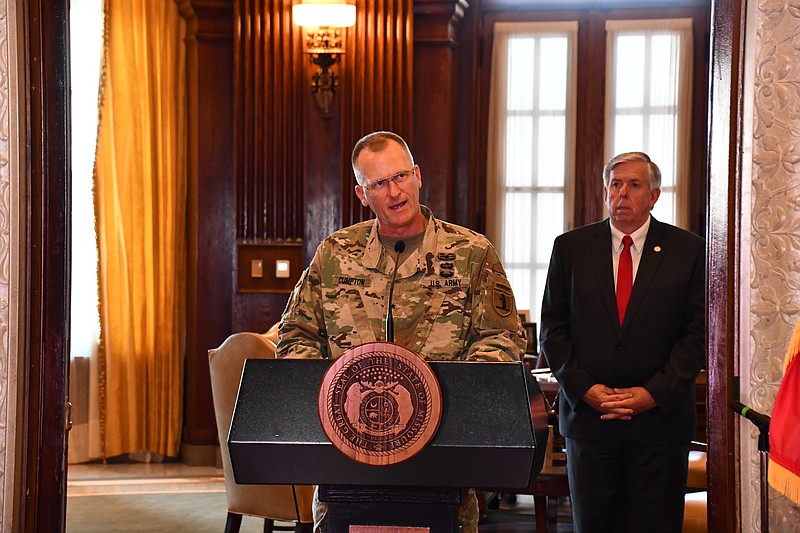 George Floyd should never have died the way he did, and law enforcement involved should be held accountable for it, Missouri Gov. Mike Parson reiterated Tuesday. But Parson also did not mince words when he said the violence that's followed some of the protests in Missouri over Floyd's death and broader issues of injustice will not be tolerated.

The announcement came after a particularly violent night in St. Louis, where a retired St. Louis police officer was killed by looters and four other law enforcement officers were shot.

"We're not going to have police officers, we're not going to have citizens of Missouri being shot in our streets in this state, and we're going to put an end to it with whatever forces I have as governor of the state of Missouri, whether that's every member of the Highway Patrol, whether it's every member of the National Guard - I will call up all that to stop the violence in this state," Parson said.

George Floyd, a black man, died May 25 in the custody of the Minneapolis Police Department after a white officer pressed his knee into Floyd's neck for several minutes while Floyd pleaded for air. That officer has since been charged with murder.

Parson eclared a state of emergency in Missouri on May 30 due to civil unrest, activating the Missouri National Guard to support civilian authorities and provide other assistance as needed.

The National Guard has already been ready to offer assistance to authorities; Guard members were involved with monitoring Monday night's protests in Jefferson City, which were peaceful, and were followed by minor property damage in the form of broken windows at downtown businesses after the protest had ended.

Parson activated the National Guard on March 26 to help with response to the pandemic, and the Guard is still doing that as well, particularly to assist with testing for the disease.

Adjutant Gen. Levon Cumpton, leader of the Missouri National Guard, said that despite being "deeply engaged" with the COVID-19 response, there are more than 10,000 troops ready to assist the Highway Patrol and local law enforcement.

"Law and order has to take place in this country for us all to survive, and we will commit to local enforcement," Parson said.

Once protests end, Parson said, people should go home, and he encouraged protests to happen only in daylight.

"Things need to be done different in society. We need to address issues that the African-American community has, but not through violence, not through what we're seeing out there on the streets," the governor said.

When it comes to law enforcement officers' decisions of when and how to disperse crowds or otherwise use means such as tear gas, rubber projectiles and marker rounds, Karsten said: "Those (decisions) are made by commanders on the scene observing what's taking place, and once an unlawful activity has occurred, the commander has the option to take further action," including use of chemical munitions.

"Kansas City, as well as other agencies that I've observed take great steps to avoid doing that, but when forced into the situation after having provided many warnings, they will take action," Karsten said.

"There are after-action reviews on some of these activities, and many agencies will conduct a debriefing afterwards," she added.