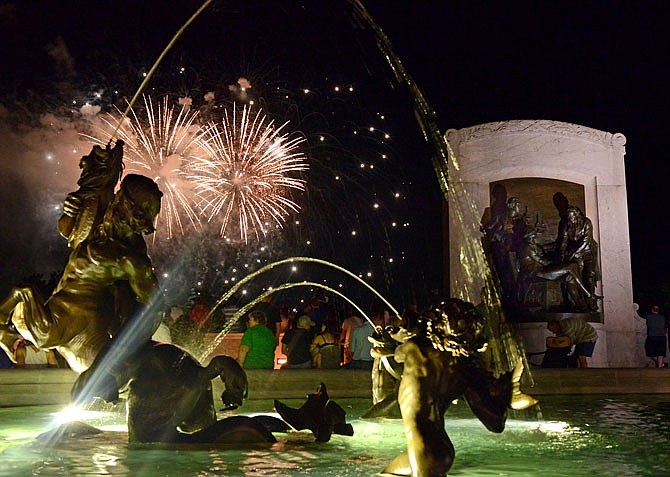 The "Red, White and Boom" fireworks concert covers the sky over Monument Plaza on Thursday, July 4, 2019, capping off the two-day Salute to America Celebration in downtown Jefferson City.

Jefferson City's longtime Salute to America Fourth of July celebration is moving forward but with some noticeable changes because of the coronavirus pandemic.

The 4th of July celebration will have several hand-washing stations, and there will be increased sanitation efforts, said Penny Smith, Salute to America event coordinator. Organizers are also encouraging attendees to practice social distancing.

"I talked with the governor's office and working with the Cole County (health) director, and I came up with a COVID action plan for the event so we can do our part in keeping the public safe through sanitation, spreading things out a little bit more," Smith said.

The parade route has been expanded an extra block so it now includes the 100-300 blocks of East High Street, Smith said.

Parade participants will not be allowed to hand out things like candy, informational flyers or brochures, she added.

"We're reiterating no handouts to help keep from spreading the virus as well," Smith said.

Organizers eliminated some activities because of the coronavirus too, including the inflatable runs, Splash N Play, hot dog-eating contest, and Little Mr. and Miss contest, Smith said.

The hours have also been adjusted. Instead of activities starting at 11 a.m. July 4, they will begin at 4 p.m. and last until after the fireworks.

Since the festival hours changed, Smith said, there will not be a Route 66 Car Show this year.

Salute to America also organizes the annual Concert Inside the Walls, which was originally scheduled this month but has since been postponed to Sept. 12 at the Missouri State Penitentiary. Smash Mouth will headline the concert.

Print Headline: Salute to America to continue 4th of July festival but with changes