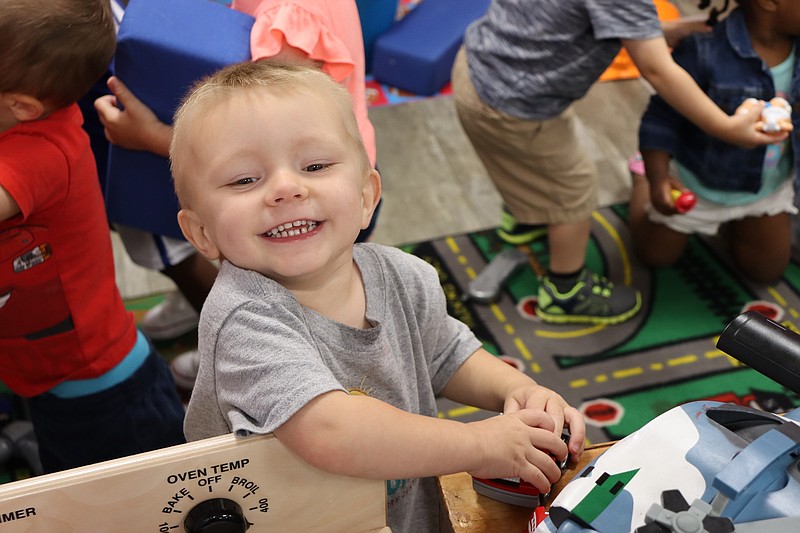 The child care industry is facing a fork in the road.

Many child care programs remain closed or are still facing low enrollment numbers, decreased revenue and higher costs due to the COVID-19 pandemic.

And the clock is ticking. As assistance and resources for child care programs begin to dwindle, many may be faced with the decision to permanently close.

Of the 49 that are open, most aren’t operating at full capacity, said Robin Phillips, chief executive officer of Child Care Aware of Missouri. About two-thirds of child care programs in Missouri have reopened, Phillips said, but most are also not at full capacity.

Phillips said she doesn’t know yet if any have closed permanently, but it’s likely they will.

“If something doesn’t change in the next one to two months and there isn’t some kind of bright light at the end of this tunnel in the next 30-60 days, I think it’s very fair to say that more programs are going to close permanently,” she said.

Child care programs struggled with a lack of resources even before the pandemic, Phillips said. Now, they have increased costs and a lack of revenue due to lower attendance.

“There is true fear of many of these programs not being able to recover because of the lack of resources they’ve had access to — pre-COVID and during COVID — to stabilize them,” Phillips said. “COVID has pulled back the curtain on the 30- to 40-year challenges that have been faced by the child care industry, and if federal investments aren’t made at a substantial level, and immediately, child care is going to crumble across the state.”

In a survey conducted by the National Association for the Education of Young Children, about two out of five of the 5,000 respondents — and half of those who are minority-owned businesses — said they are certain they will close permanently without additional public assistance.

“This is a crisis,” Phillips said. “If more programs are forced into permanent closure, we are really putting our children, families and economy at risk.”

From April to June, Kids Win Missouri, a children’s policy and advocacy coalition, engaged with more than 100 child care providers throughout the state through surveys and conversations to better understand the challenges child care centers are facing due to the COVID-19 pandemic.

Key takeaways from the organization’s report detailing these challenges concluded that many programs throughout the state are still at risk of financial insolvency, current payment structures do not provide the needed flexibility to address immediate needs and long-term planning, and there are inequities in how programs are experiencing the pandemic.

“Child care providers have been hit by the pandemic in a very unique way,” Brian Schmidt, executive director of Kids Win Missouri, said in a news release. “The child care system has always operated on razor-thin margins, and we are now asking them to serve on the front lines, care for the children of essential workers, completely overhaul their operations to accommodate new requirements, and to do so while losing income.”

Little Explorers Discovery Center Director Donna Scheidt said she doesn’t think any child care centers have fully recovered because they still have to pay staff while losing money, which is the biggest expense.

“We were lucky in that we got the Payroll Protection (Program) loan, so that helped us, but that is the only thing that helped us — and basically only for two months,” she said.

“There’s a lot of things that we have to have extra that we didn’t before,” she said. “I think 2020 is going to be a rough year for all child care centers. Sometimes just getting the supplies you needed was very hard.”

However, the United Way of Central Missouri’s Early Childhood Advisory Council has allowed child care centers to help each other by offering resources and letting each other know where to find resources, Scheidt said.

“Even though you might say we’re in competition in one way, we’re all after the same goal — we want children to have quality child care,” she said. “United Way has been very helpful with that too and helping us network. That’s been one of the good things, and people have just been so kind to everybody.”

To keep quality staff, cutting pay is not an option for many centers.

“When you work in child care, you don’t make a lot of money anyway,” Scheidt said. “The only thing I could cut them to is minimum wage, and they could find a lot easier jobs than this.”

Some child care providers are even paying staff more due to the pandemic and are still struggling to hire quality staff.

“The profitability of the year is definitely going to be down,” Luebbering said. “I’m having to pay teachers more to keep the buildings clean. Normally, our enrollment’s 100 percent. We’re running at like 80. Most of our profit comes from those last few enrollments. We’re paying our bills, but we’re not able to probably really grow the program like we should be able to compared to if we didn’t have COVID.”

Ideally, Luebbering said, she would like to hire another 10-15 employees by the end of August — but it’s difficult to find enough quality staff right now.

“There’s a lot of incentive not to work right now,” Luebbering said. “My staff deserves kudos because they were here working when, really, they could have been making more money on unemployment.”

Many of Luebbering’s employees are working full-time hours, but they’re technically part-time or temporary employees.

“Come August, I’m very concerned about the ability to find good staff because of COVID and the economic situation in the world right now,” she said. “That’s my biggest concern out of everything. I think we’ll find kids, I think we’ll be able to pay our bills, I think we can keep the building as sanitary as possible, but the biggest concern that I have right now is finding staff.”

In April through June, Missouri Child Care Subsidy providers received payments based on authorized care instead of attendance. For example, a program that was authorized to take 100 children but had 25 may have been paid for 100 children instead of the 25 that were attending.

These payments were supporting providers that serve parents receiving support from the Child Care Development Block Grant program. But on June 30, the Department of Social Services ended these enhanced payments, and payments resumed being based off actual attendance. Since most child care programs are not running at full capacity, many may be faced with the decision to permanently close.

The state allocated $66 million from the federal Coronavirus Aid, Relief and Economic Security Act to help with child care needs for families and providers, but this addressed only 10 percent of the need, Phillips said.

“It can’t just be dependent upon one funding stream that the state receives from the feds,” Phillips said. “There’s many other ways in which this could be attributed to long-term solutions. We just don’t have time for long-term solutions right now.”

Kids Win Missouri joined national efforts calling for Congress to invest an additional $50 billion to stabilize the child care industry, which Congress will vote on next month.

“A number of national, bipartisan policy groups have arrived at this $50 billion number as what it will take to stabilize the industry, and many actually think it will take more,” Craig Stevenson, director of policy and advocacy for Kids Win Missouri, said in a news release.

“I think people are realizing that we need to help, and we need to value the child care system and look at it through a very different lens as part of economic impact,” Phillips said. “I’m really hoping — as stressful and challenging as it is — that we come out on the other side with the lessons learned that we have to have these types of facilities available for our children so people can go to work. That’s the bottom line.”

The future of child care also depends on getting children back to child care.

Kristen Stegeman, who works at Walmart, decided to stop taking her 2-year-old son to Show Me Child Care because she was worried about him contracting the coronavirus. Stegeman, her husband and her son’s grandparents are now taking turns watching him, and she hopes to take him back Sept. 1 — but the decision is going to be difficult, she said.

When making the decision, Stegeman said, she and her husband will consider the number of local COVID-19 cases and safety precautions the center is taking. She doesn’t expect children to wear masks, she said, but temperature checks and increased sanitation would make her feel more comfortable.

But even with temperature checks, Stegeman is nervous about sending him back.

“You could be contagious with it and then all of a sudden you’d go home the next day and you’d be running a fever, and you were contagious the day before,” she said. “I think that’s why this is so dangerous.”

She also worries parents will take their sick children to day care.

“Working at Walmart, I know for a fact that people will come in there sick,” she said.

Child Care Aware national organization has guidance for parents deciding when to send their children back to child care, based on guidance from Centers for Disease Control and Prevention. The guidance includes safety precautions that child care programs should be taking, such as limiting visitor and parent access to the building, checking temperatures, asking parents COVID-19 screening questions, thoroughly sanitizing, washing hands and keeping children in the same small groups throughout the day.

At Show Me Child Care Center, employees are sanitizing items frequently. At first, parents were not allowed in the building, then the center transitioned to allowing parents to choose whether to come in. Since July 1, parents have been required to enter the building to pick up their children, and wearing a mask is optional, owner Julie Schmitz said.

Schmitz said while the children do not socially distance, she believes serving the same children every day gives families and staff some peace of mind.

At Little Explorers Discovery Center, employees are spraying commonly touched items with bleach water and keeping children in the same groups in nine separate classrooms. They have relaxed the 10-limit group size rule they previously had, though, because their attendance has increased and they have only nine classrooms. One room has about 15 children, and the rest have 10 or fewer, Scheidt said.

Little Explorers is licensed for 99 children, and it was close to 90 children before the pandemic. In March, it dropped to about 20. By June, it had increased to 60 children, and the center now has about 70, she said.

Until recently, Little Explorers wasn’t allowing parents into the building. Because the center doesn’t have enough staff to walk the children in and out of the building, Scheidt said, parents can now come in to pick up their children as long as they wear a mask.

“We are just very hopeful that by taking these extra precautions that we stay safe and COVID-free,” she said.

Other child care centers haven’t relaxed safety measures at all.

At God’s Little Tikes Child Care & Preschool, a ministry of Fountain of Life Church, children are kept in groups of about 10 or less, staff and children are sanitizing hands frequently, parents are not allowed inside, employees are checking children’s temperatures before they enter the building, and employees are sanitizing objects frequently and teaching children about social distancing, Pastor Troy McCrory said.

Courtyard Early Learning Center is keeping children in the same small groups, checking temperatures, regularly sanitizing items, and asking families to stay home if the child or anyone in the family could be sick, Luebbering said.

Luebbering said it was important to her to keep Courtyard Early Learning Center open.

“If these kids weren’t able to come here or stay with their parents, they would be going to grandma and grandpa’s house, basically, and that’s the worst of the two scenarios,” she said.