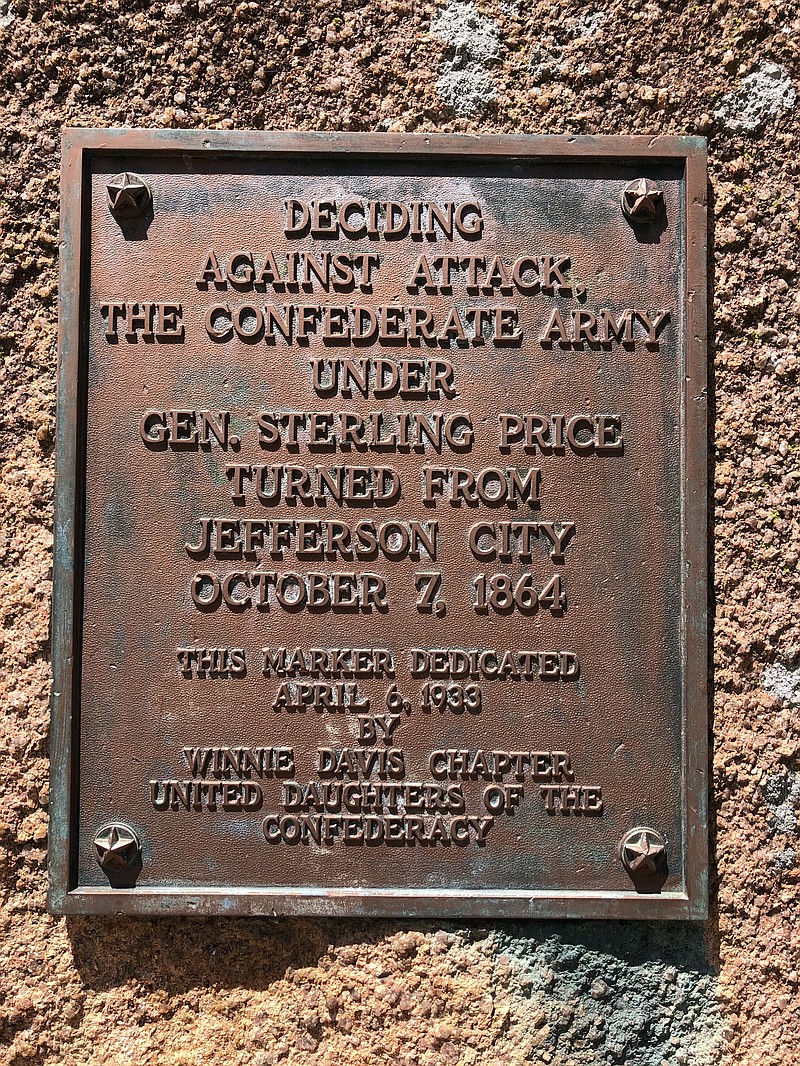 Sometimes, the fact that a battle did not happen becomes a victory for one side. Such was the case for Union troops in Jefferson City on Oct. 7, 1864.

Confederate Gen. Sterling Price was on the last leg of his Missouri raid when the rebels crossed the Osage River on Oct. 6 at Bolton's shoals and Castle Rock near Pike's Camp outside of Wardsville. Under Price's command were three divisions led by Gens. James Fagan, Joseph Shelby and John S. Marmaduke (Missouri's governor in 1885). In all, Confederate forces were estimated at 10,000-12,000 men. Their objective was to return the Capital City to Confederate control.

The rebels were met with vigorous resistance from Union soldiers as they crossed the Osage and the Moreau rivers. In "Price's Lost Campaign," author Mark Lause noted "officers on both sides reported an intensity of conflict that simply belied the small numbers of the officially acknowledged casualties." Outnumbered, the federals withdrew to the city's southern entrenchments located around present-day McClung Park and Fairmount Boulevard. Reports vary, but total casualties may have been around a dozen.

That September 1864, there were fewer than 1,000 troops stationed in Jefferson City, which had been under martial law since 1861. With word of Price's advance Missouri's Union commander, Gen. William Rosecrans ordered Central District commander Gen. Egbert Brown to take charge of the defense of Jefferson City.

Just three days earlier, on Oct. 3, as Price moved through Gasconade County, Brown had a paltry force consisting of "unorganized infantry regiments who had never been drilled for even an hour." In a matter of days, Brown pulled together 3,500 men composed of "unorganized infantry volunteers, Enrolled Missouri Militia and citizen guards, some civilians too young or too old for the EMM, and most without weapons." Now, at close to 4,800 men, only 2,300 of whom were battle-ready, Confederate forces still outnumbered the Union two to one.

Among the soldiers making their way toward the Capital City was William F. Cody, the future "Buffalo Bill." He was out scouting for the Seventh Kansas Cavalry when he crossed paths with James Butler Hickok. The future "Wild Bill Hickok," dressed in gray, was also out scouting but was a Union spy in Marmaduke's Confederate camp.

As Price drew near, the bitter realization that more reinforcements would not arrive in time, Brown decided the best defense was the appearance of great Union strength and numbers. (One is reminded of how animals "raise their hackles" to appear more ferocious.)

Brown enlisted all able-bodied residents of Jefferson City to build reinforcements. This included soldiers, militia, civilians, prison inmates and refugees. These refugees were mostly German and Black citizens who had flocked to the city seeking refuge from rampaging bushwhackers. In a week's time, existing trenches were fortified on the east and west ends of town. New fortifications were added on the south end amounting to 3 miles anchored by two forts and three more under construction.

Union sentries monitored rebel movements from several roof tops, including the Edwards home at 1122 Moreau Drive, currently the home of Nick Monaco. Land had been cleared on all sides of the fortifications making it easier for each side to monitor the other.

The Dulle home on St. Mary's Boulevard sitting atop one of the highest points in the city served as Union headquarters. Camp Lillie descended from it. According to David Lineberry in his essay "The Battle that Never Was," the bluecoats devised a clever ruse. The Confederate scouts who had bivouacked near Greenberry Road at the Moreau River were tricked as they watched Union troops marching in a loop up and down the hill giving the appearance of higher numbers.

As night fell on Oct. 6, cannons roared for emphasis from Union Hill where Jefferson City High School is now, and rifle fire cracked through the night from the rag-tag recruits behind the trenches.

Maybe the ruses worked. Maybe Price got word Union Gen. Alfred Pleasonton was advancing with 7,000 troops from the east. Maybe the former governor realized he was wrong to think throngs of southern sympathizers in the city would welcome him and he could take the city without bloodshed. Maybe for all these reasons, Price decided against attack. His campaign would end with a decisive defeat in Westport two weeks later on Oct. 23.

A marker on Moreau Drive and Fairmount Boulevard serves to remind us of this pivotal "non-battle" and the Union's strategic and tactical victory. It sets at the center of the Union's surveillance, entrenchments and fortifications. The remnants of some of entrenchments are still visible today in McClung Park.

It was an amazing collective effort by the citizens of Jefferson City to pull together against a common threat, building fortifications, preparing makeshift hospitals, manning the trenches, feeding the recruits. Jefferson City was "JCStrong" long before the tornado of 2019.

Jenny Smith is a retired chemist with the Highway Patrol Crime Lab and former editor of the Historic City of Jefferson's Yesterday and Today newsletter.