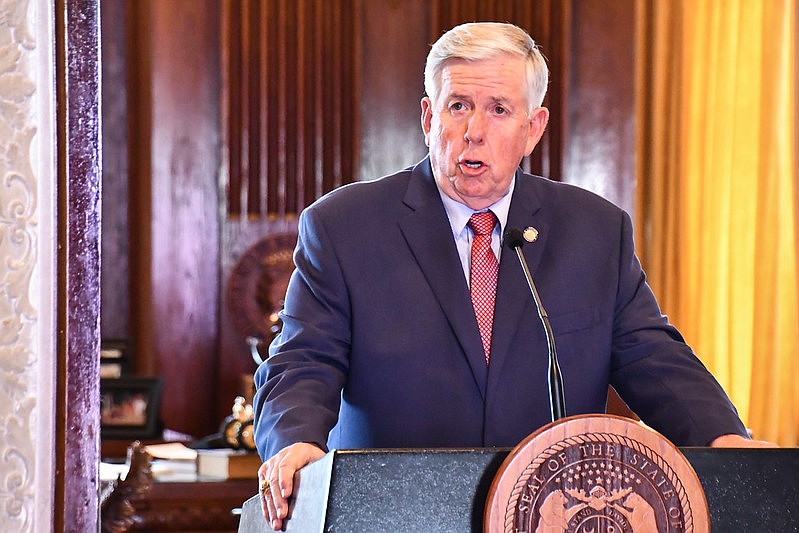 Gov. Mike Parson speaks at the Missouri Capitol during a news briefing on June 9, 2020.

Comments Gov. Mike Parson made last week on St. Louis radio made national news Monday, with Parson being criticized for his outlook on the safety of Missouri schools opening in the fall amid the COVID-19 pandemic.

Parson was interviewed Friday on the Marc Cox Morning Show on KFTK, 97.1 FM.

In the context of youth sports in the St. Louis area, Parson was asked "What do you do when you see local politicians over-reacting to this situation?"

"Yeah, you gotta stop. Again, there's data out there; there's scientific evidence now of who this affects and who it doesn't, and kids are the least likely to have a problem with this," Parson said.

He went on to say, "These kids gotta get back to school. They're at the lowest risk possible and if they do get COVID-19 - which they will, and they will when they go to school - they're not going to the hospitals, they're not going to have to sit in doctors' offices; they're going to go home, and they're gonna get over it, and most of it all proves out to be that way if you look at the science of it."

Parson added "we gotta get real with that and realize that you know, we gotta move forward. The risk of not getting youth involved in activities, the risk of not putting them back in school, I guarantee you will create more problems than the virus will ever think about creating long-term for our state. So, we gotta figure this out, and we gotta get a balance, but we gotta get life back to normal as we can get it there."

A spokeswoman for Parson's office said she could not immediately respond, because of travel, to questions from the News Tribune on what sources the governor was basing his health conclusions on and on how the health of teachers, other school staff, parents and other family members fit into reopening schools. However, she deferred to a posted statement on Twitter.

There did not appear to be any new statements Monday regarding schools' reopening, but Parson - who said his daughter is a school teacher - earlier this month attended a summit in Washington, D.C., on schools' reopening, and in a tweet from his gubernatorial campaign account, he said, "We are working with President Donald Trump and his administration to support America's students during the pandemic."

Last week, Missouri's Democratic Party released a statement on Parson's Friday radio comments: "The Governor's comments are despicable and morally reprehensible. Mike Parson today said he is fine with every child in Missouri getting COVID-19 and spreading it to their family members. There is no place in our politics for such a reckless disregard for Missourians' lives."

Parson's comments on St. Louis radio echo his earlier remarks this month at one of his briefings: "I don't think there's any question in the state of Missouri, we've got to get the schools opened back up. We've got to get kids back in school. There's a lot of things that occur by not having school that could be far worse than going in there and fighting the virus."

He cited a decline in child abuse being reported, children with disabilities who may have not had virtual learning as an option, and "You've got kids in poverty - maybe the best place in the world they can be, and the safest place they can be is at school and have a relationship with the teacher that they don't have at home, maybe with their own moms and dads. That's all part of the education institution, and if we stop that, we stop the future."

Whether and how schools reopen this fall for in-person classroom learning is ultimately up to local school district officials - and local health ordinances - but the state's departments of Health and Senior Services and Elementary and Secondary Education earlier this month released guidance for school reopening, available at dese.mo.gov/sites/default/files/COVID-MO-K12-Reopening-Guidance.pdf.

Among the document's recommendations - updated last week - are that K-12 schools screen children each day for COVID-19, visitors should be limited, students should stay with the same group of peers and adults throughout the day or have assigned seating, and especially older students and students on buses should be encouraged to wear masks, as well as school staff.

Students staying with the same group of fellow students all day is recommended to include recess: "Students should engage in these activities with their primary cohorts (to the extent possible) to reduce the number of contacts. Multiple cohorts could have recess at the same time, as long as they are playing in separate areas of the playground."