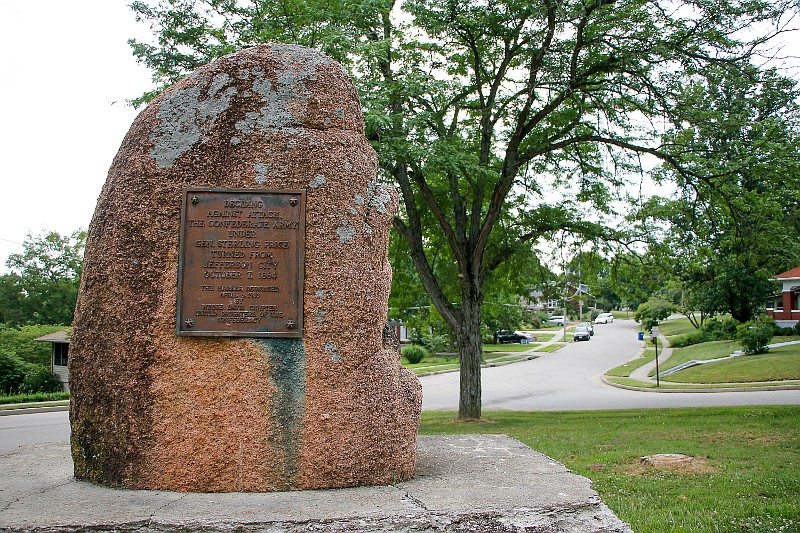 The Jefferson City Historic Preservation Commission began discussions about the potential removal or relocation of a Confederate marker on Moreau Drive.

The meeting was meant as an informational opportunity for the commission, and no decisions are being made at this time in any direction.

The Sterling Price marker is a large brown stone on a grey stone base, bearing a plaque which reads "Deciding against attack, the Confederate Army under Gen. Sterling Price turned from Jefferson City October 7,1864."

The marker was dedicated April 6, 1933, by the Winnie Davis chapter of the United Daughters of the Confederacy.

Paul Kiekhaefer, a Jefferson City native who now lives in Virginia, reached out to the city about the monument after doing some research on Confederate monuments.

In recent years, and particularly in the previous months, discussions have spiked about removing Confederate monuments and flags.

Kiekhaefer informed the commission on the history of the monument.

In 1864, Confederate forces, led by Gen. Sterling Price, planned to attack Jefferson City in order to secure a possible victory and help turn the tide of the war, which at that point was already leaning toward the Union, which eventually won.

When confronted with strong defenses by the Union, the Confederate forces decided against attacking the city, as the plaque states.

Kiekhaefer said, like many Confederate monuments, the plaque was built during the time period of the implementation of the Jim Crow laws, which were put in place to legalize segregation.

"In a very clear way, these monuments and statues were built to remind us of the Civil War, but tell the story in a way that's favorable to the South and basically build a base of empathy in the general public," Kiekhaefer said.

Kiekhaefer argued the plaque ignores the full story of the events, including the efforts of the Union forces.

"Given that it's telling a piece of history, I think we should examine a proposal to replace this marker with something that would provide the full story, whether that's a sign or a simple plaque in its place, I think we can do better," Kiekhaefer said.

The marker was originally placed at the intersection of Moreau and Hough, but it was relocated to its current location in 1955.

While the marker is now located within the Moreau Drive National Register Historic District, it is not included in the historical significance of that district because it did not originally belong there.

This means, should the marker be removed, it would not go against any rules relating to the historic district.

Glover Brown, executive director of Friends of Lafayette Street and The Historic Foot District, shared his thoughts on the marker with the commission.

"Let's not tear down these monuments just because I'm mad," Brown said. "Let's correct the history, so it won't be forgotten to the generations that come behind us. So now they can walk down the street and understand what that monument went, who that person was and what that person did in history. We can't disrupt history. Once you become complacent, history has a way of repeating itself."

Mary Schantz, president of the commission, said there would be a lot of steps to go through if the commission or the city decided to remove or relocate the marker, starting with figuring out who currently owns the marker.

Schantz said, if the commission makes any moves relating to the marker, public hearings with the commission or the full Jefferson City Council will be held, and both bodies will likely sign off on the action.