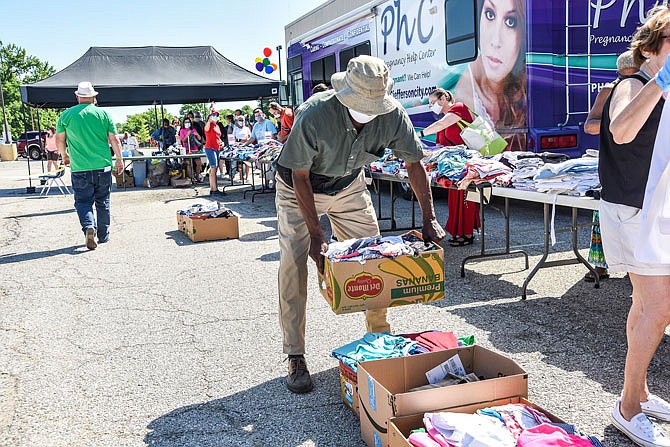 Volunteer Charles Pannell carries a box of sorted clothes Friday, June 12, 2020, during a clothing giveaway at the Samaritan Center in the parking lot next to Save-a-Lot at 1228 E. McCarty St. Due to being closed except for food pickup, the center had an abundance of clothing.

The Samaritan Center is replacing its annual foundation dinner and auction for 2020 with a virtual fundraiser.

During the month of July, the Jefferson City nonprofit hopes to raise $50,000 to help offset the loss of what would have been its 18th annual auction fundraiser.

The event, normally held in July, typically raises around $100,000 for the Samaritan Center and its foundation, Operations Manager Ben DeFeo said.

The center, at 1310 E. McCarty St., offers a food pantry as well as clothing, financial assistance, and services such as medical and legal care for those in need in Cole, Maries, Miller, Moniteau, Osage and southern Callaway counties.

Samaritan Center staff decided not to hold this year's fundraising event in consideration for the safety of those who would attend amid the ongoing COVID-19 pandemic, DeFeo said, and considering the hardship businesses that would normally donate items for the auction might also be facing.

The annual auction primarily raises money for the Samaritan Center Foundation, which exists to ensure the center can continue its work even in the event of budget shortcomings. A one-year drop in donations to the foundation might not severely impact the center's day-to-day operations, DeFeo said.

However, one element of the fundraising event does feed the Samaritan Center's daily work - and its clients.

The "Polling for Pallets" normally offers auction-goers a chance to donate an amount specific to the value of a case or pallet of certain staple food items.

"That lets them have something to bid on without actually taking something home. It generally goes over very well," DeFeo said. "Because it's for food, it's also eligible for the Missouri Food Pantry Tax Credit."

This year, a "Pledge for Pallets" is available online. Donors can choose to fund a range of bulk food options, from $25 for 10 boxes of cereal to $1,000 for 400 boxes - or enter a custom dollar amount to donate.

It's been an difficult budgeting year for nonprofits like the Samaritan Center.

"It's scary. It's hard to predict," DeFeo said. "It's just a matter of laying out the best course of action we can and tempering expectations, trying to plan for the worst case."

The center relies somewhat on donations made at local churches, but with in-person church services temporarily suspended because of the pandemic and many still not attending, there was some uncertainty about that funding stream. So far those donations have held steady, though, DeFeo said.

"We're very appreciative of that continued support," he added.

The center hasn't seen much increase in demand for its services since the pandemic began, he said, but that could change after supplemental unemployment benefits are no longer available.

To donate to the Samaritan Center's virtual fundraiser using a credit card, visit midmosamaritan.org and click "Donate," or visit samaritan-center.square.site. Samaritan Center supporters can also expect information about the fundraiser by mail this week and may donate by check.

All donations to the center are tax-deductible, but only donations to fund food purchases qualify for the Missouri Food Pantry Tax Credit.

The Samaritan Center plan to resume holding its annual foundation auction and dinner on July 15, 2021.