Yasica Buitrago looks to make a difference through voting, helping others 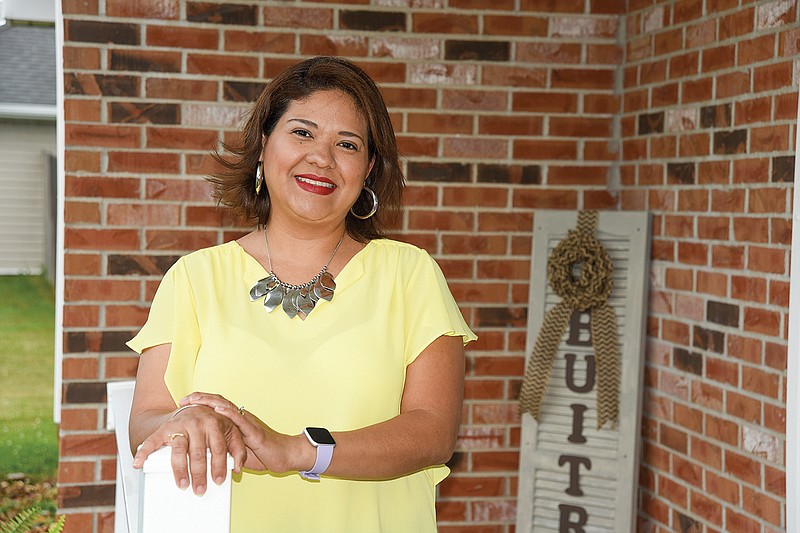 Yasica Buitrago poses on the porch of her Holts Summit home. Buitrago became a U.S. citizen in February. As a new citizen, Buitrago feels like she can do anything, and she wants to show others that they can, too.

As a new citizen, Yasica Buitrago feels like she can do anything - and show others they can, too.

"I feel like now I have the power," she said.

Buitrago moved to Jefferson City from Nicaragua in 2009 and became a U.S. citizen in February. Now, she feels like she can make a difference by voting and helping others - especially immigrants.

Buitrago is involved in a group at St. Peter Catholic Church that helps girls prepare for their quinceaeras. Widely celebrated among Latinas, the quinceaera is a 15th birthday celebration that marks an important milestone in a girl's life.

Most of these girls have immigrant parents, Buitrago said, so she and the other group members advise them to continue studying after high school and show them they can grow in this country.

"Sometimes it's hard for them because they are immigrants and don't have the opportunity to study," she said. "I can help the youth, the teenagers, because they can do something different in this country. They can be professionals."

Her job at St. Peter is a big opportunity for her, she said, because when she first moved to Jefferson City she worked in manufacturing. In Nicaragua, Buitrago was an architect. When she moved here, she became frustrated as she learned she would need to go back to school to be an architect here, even though she earned her bachelor's degree in Nicaragua.

Buitrago moved to Jefferson City after meeting her husband, who moved here from Nicaragua at 16. Her husband taught her that while learning English is difficult, it is possible by being around people outside of the home as much as possible.

When she first started her job in manufacturing, she would come home crying because she didn't know how to communicate with her coworkers. But her husband pushed her to keep going back and told her it would be worth it.

"Now, I feel confident," she said.

Two years ago, Buitrago became a teacher at Growing Hearts Montessori School, a bilingual preschool, where she still works during the summer. A devoted mother, she knew she would be a great teacher.

Buitrago's two daughters are her biggest motivators, she said, because she wants to set a good example for them and show them they can break barriers. She loves working at the same school her daughter attends because she can show her she can do anything - even if it's difficult.

"I want to teach my girls that they can be professionals here," she said. "It's hard, but you can do it."

Buitrago is helping her 7-year-old daughter learn how to read Spanish. While her daughter gets frustrated at times, Buitrago pushes her and teaches her that she can do it.

While it's very different from architecture, Buitrago said she loves teaching children and showing them they can do anything through education.

As her first time teaching older children, she was nervous at first. But after a while, she grew to love it. The children love that she speaks Spanish and tell her they want to learn.

As the only employee at St. Peter who speaks Spanish, Buitrago feels she is making a difference for the children.

When her 3-year-old daughter is older, Buitrago plans to go back to school to become a Spanish teacher.

"I feel like I can make a difference in this country, in this state, in this city," she said.