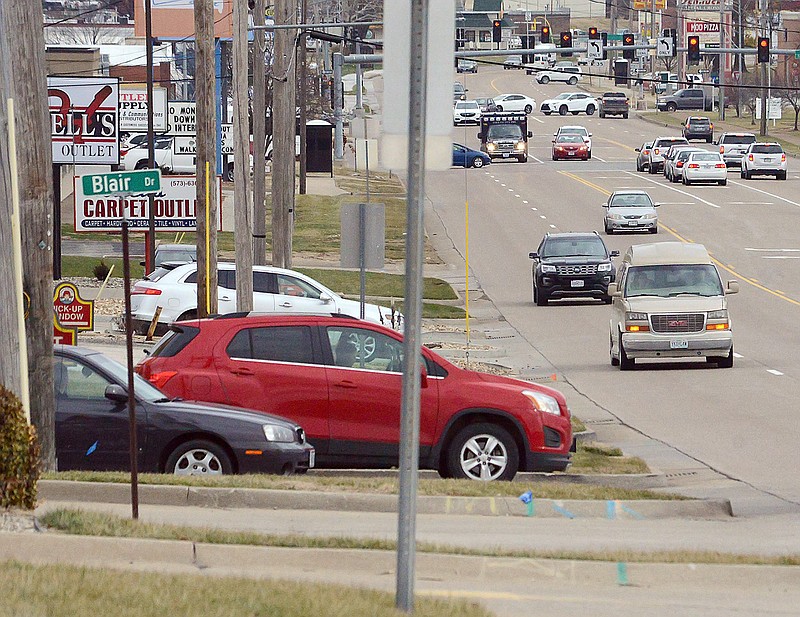 Traffic travels Thursday along Missouri Boulevard past the intersection of Blair Drive. The stretch of Missouri Boulevard has seen the most vehicle accidents in the Capital Area Metropolitan Planning Organization area in the last five years.

Of more than 7,000 traffic crashes in the Capital Area Metropolitan Planning Organization area from 2013-17, 42 percent took place in nine specific areas of the city - including two stretches of Missouri Boulevard and several highway intersections.

While the CAMPO area includes outlying communities like Holts Summit, St. Martins, Taos and Wardsville, the traffic crash analysis report presented to the CAMPO Technical Committee on Thursday focused on the Jefferson City area, where the majority of traffic incidents occurred.

Data for the report was provided by the Missouri Department of Transportation with assistance from the Missouri Highway Patrol.

"This is just wanting to bring information to (the committee) so we can bring a discussion to the table, possibly, to see what we can do," Bowden said.

From 2013-17 (the most recent data available), there were 7,738 traffic accidents within the CAMPO region. In 2013, the lowest number was 1,470, while 2016 saw a spike up to 1,690. Bowden said the Highway Patrol attributed the spike to decreased gas prices leading to more drivers on the road.

Despite the lower rate of accidents, 2013 saw the most severe injuries per year at 76. That number has decreased each year, and in 2017 it was down to 42.

Rear-endings made up about 30 percent of all accidents, followed by out-of-control accidents, which are often speed-related, at about 18.4 percent, left-turn right-angle collisions at about 8.6 percent and right-angle at about 7.3 percent.

A right-angle accident describes two vehicles meeting at a right angle, where one hits the other on its side.

With the data given, they're only able to pinpoint the locations of the accidents, not the direction of travel for the vehicles or other factors.

The areas with the most accidents were the two sections of Missouri Boulevard, U.S. 50/63 from U.S. 54 to Lafayette Street, and the bridge.

A majority of the accidents were rear-end crashes - 367 - but there was also a large portion of left-turn right-angle collisions - 164.

Bowden went deeper into the sites of the crashes along Missouri Boulevard, pinpointing several smaller road sections and intersections where accidents commonly occurred.

Almost half of all serious injuries on this stretch of road are caused by left-turn accidents, according to the report.

Another portion of Missouri Boulevard, from Country Club Drive to Stoneridge Parkway, which sees just more than 33,000 vehicles daily, was listed as the location of 432 accidents, making it the third-highest. Around 5.6 percent of all CAMPO region accidents occur in this section of road.

The portion of U.S. 50/63 between U.S. 54 and Lafayette Street saw the second-highest number of accidents at 572, making up about 7.3 percent of the total.

That stretch of road serves as the converging point for U.S. 50 and U.S. 63 and includes several stop lights that prevent continuous movement. The average daily traffic count is about 43,000 vehicles.

There were also four pedestrian accidents on this portion of road, resulting in two serious injuries.

The bridge crossing the Missouri River just outside Jefferson City was the site of the fourth-highest number of accidents - 352, or about 4.5 percent of all accidents in the CAMPO region - in less than 2 miles of road.

The bridge includes the convergence of two major highways - U.S. 54 and U.S. 63 - making it one of the most congested roads in the area, according to the report. Traffic counts show just more than 53,000 cars cross per day.

More than half of the accidents on the bridge were rear-endings. The second-highest, out-of-control accidents make up about 27 percent. The bridge has one of the higher numbers of passing-related accidents, with about 7 percent caused by passing.

Due to the levels of congestion and number of accidents, the bridge is the main area of focus of the report and is No. 1 on CAMPO's Illustrative Projects list in the Metropolitan Transportation Plan, according to the report.